Last night we milked Buttercup. We did not milk her all the way out, as we did not want her to produce tons of milk. Here is a bucket of some of the colostrum we milked out of her. Isn't it a pretty yellow? 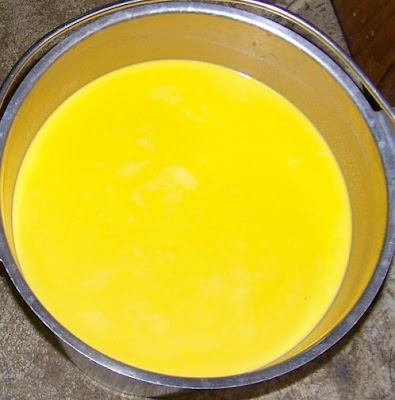 We had yet to see the calf actually nurse, so we fixed him a bottle and gave him that. They were out together last night in the tall grass. 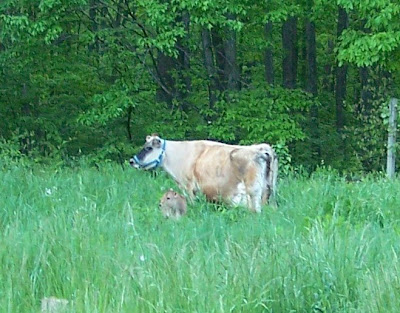 I LOVE this picture of the lambs. If you click on it and make it bigger, you can see their faces really well. Jeremiah is on the far left of the picture. He was hiding. 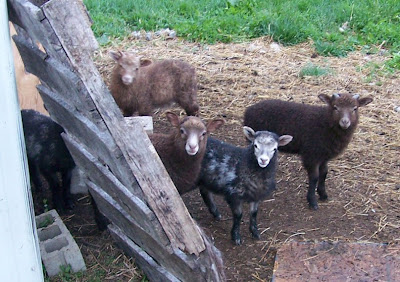 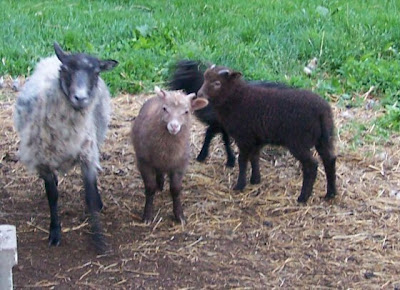 Now, fast forward to today. Michael went out this morning to give the calf a bottle. He took the whole bottle really well. I was getting things ready for the fellowship and also putting the roast in the oven. Michael went back out to do something and came back in and told me that Buttercup was down. He grabbed some stuff and headed out. I went out and was shocked. I figured when he said she was down that she was laying like normal and maybe a bit off feed. She was DOWN. Her back legs were straight out behind her. She was very weak. She had milk fever. We were giving her drench and also a tube of calcium paste. We had a vet tell us to give her one a couple of days before calving and one right after calving. It turns out that we should not have given her one before she calved, especially since she is 13 or 14 years old. We knew she was in trouble. Of course our animals never get this way on a week day in the daytime. We were calling all the large animal vets anywhere around. They all told us to call this one clinic that was on emergency call. We did and had to leave a message for them to call back. We called a couple of friends that have a dairy and they were all at church. We did find another guy that did the AI for us and he owns a dairy farm. He said she needed an IV of calcium. I really thought she was a goner. I was praying and had others praying. She couldn't hold her head up and kept trying to roll over on her side. Finally, the vet arrived. It was a young couple. She is a small animal vet that works in the office and he does the large animals. He ended up giving her 2 bottles of calcium via IV. He told us that without her getting that, she would not have made it. He did a lot of explaining, which I really liked. He said that when a cow is dry, they need lower calcium. Once they calve, then they need the extra calcium. Without the calcium their muscles seize up and will not work, including the ability to shiver and make their bodies warm. They also have a hard time swallowing and breathing. Once the calcium started going in, she began to shiver. He said that was a good sign. They call it milk fever, but it really has nothing to do with a fever. They are actually very cold. He gave us instructions for the next few days.

Once that was settled we went in to eat, since our lunch was ready. Joshua and Brittany were here for worship and lunch. Joshua was a real help in moving the cow around. We were glad he was here.

We ate and then had our time of worship and fellowship. We went back out to check on the cow and couldn't find the calf. They can hide really well and the grass was really long. After searching for awhile, we had Josh and Britt come out to help. I called the Wonderful Neighbors to see if it was in their yard. They came out and helped us look. The WN Girl found the little one hiding right by a little out building. 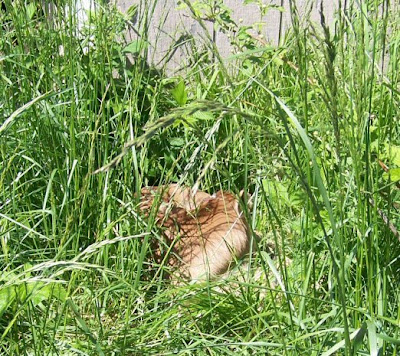 Here is Buttercup up and moving. Bless her heart. She has been through a lot. We will probably not breed her again. She will just go out to pasture. 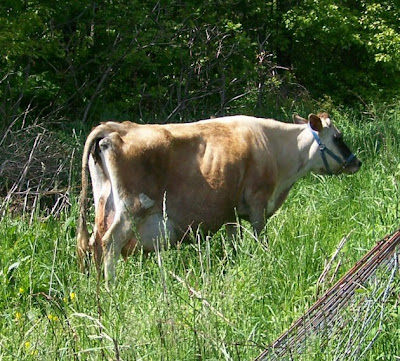 I also told you I would show you the progress of the Bleeding Heart buds. Here they are today. 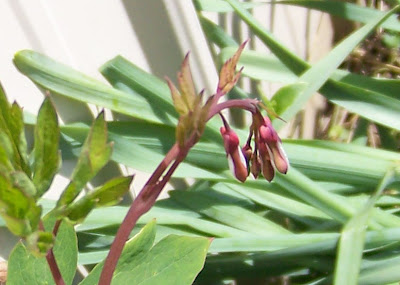 When I was a child we had a beautiful Jersey/Guernsey who went into calcium deficiency shock. It happens so quickly, you have to be on the alert.

You learn, never milk your cow out after calving. If you want to train for a bottle immediately and still make sure they get colostrum, I'm sure you know what to do now. Scary! I'm so glad you found her and she's OK. She is lovely. :)

Hi,
I found your blog from Farmgirl at Home. I too am a farmgirl, and love my life that the Lord has blessed me with:)

I understand the milk fever...my goat kidded the day before easter, and Easter Sunday when we got home at 11 pm (from dinner @ grandma's) she was almost dead. The vet - (bless his heart) came out and gave her 5 iv's of calcium and about 15 minutes later she was walking around!! It is scary isn't it? They totally loose muscle control, and so you've got a crazy animal to deal with.

You've got a great blog! I'll definitely be coming back:)

wow how crazy. Poor baby. I am glad you were able to get her up.

I'm glad Buttercup got better! She looks like a great mother.

The lambs are adorable!!

What a tough day...so glad to hear that Buttercup made it through the ordeal.

I'm so glad Buttercup is better. Now I'm wondering if this might be what happened to one of our cows. The first week of March, Jack and I went to meet our new grandson and while gone, we lost a cow and calf. We thought that it was her age. Next time we are away, we will have a neighbor check on the cows.
Regina

We had this happen last year to one of our goats. I still can't believe Jim and the boys did this (I wasn't home), but they read up on the internet, picked up a calcium IV in town, found the vein to use and proceeded to give her the IV. (Of course it was on a Sat., too.) Within 10 minutes she was back to her old self. I am very glad I wasn't home to witness the doctoring! She is our best goat, so we were so thankful to have her healthy again.