Today was quite a day. I am really tired. I did not sleep well last night and was hoping to sleep in. I did sleep in a bit, but was awakened by a phone call. My husband told me that Sunshine, one of our sheep was in labor. Normally, we never see the labor of our sheep. They are Shetlands and we just go out one time and there are lambs there. Last year, only one of my ewes got bred as we had a really short ram. The year before that, was the first time I saw a sheep in labor. It was Sunshine and she struggled for a long time. We finally had to go in and pull the babies. There were three huge ram lambs. They were all breach and none of them had legs back. So, I was kind of worried about her. I went out to check on her and she had this really weird bulge near her tail. You can see it in the pictures below. 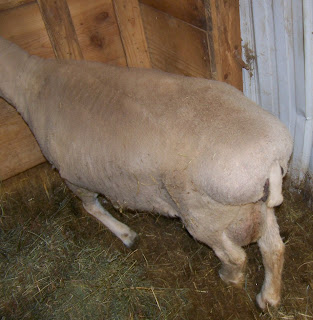 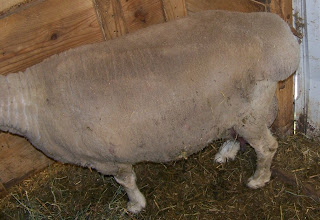 She got up when I went out there but she wouldn't come to me. I checked her a few more times and she was just standing there with her head a bit lower and not doing much. I called a dear Shepherdess friend and asked what she thought based on the above information. I also told her about the weird bulge. She was trying to picture it, so I went out with my camera and took the pictures above to show her. She said it looked like there could be a lamb with a weird presentation. As she described what it could be, I thought to myself that I was in over what I felt qualified to do. I called another friend who raises sheep and asked if my son could come and get her and bring her to our house. She agreed. Kathy came and we sat together out in the sheep shed, watching and listening. She got there about 1:45 PM. We prayed and asked the Lord if we should interfere or not. If you don't need to do anything, it is best to stay out. She labored long and hard. Finally about 5:30 PM, she pushed enough that we finally saw some hooves. We weren't sure what else. The sac was broken and we realized that it was breech. So, we pulled out a huge white ram lamb. She came over and started to clean him off. He was not breathing too well. In fact at one point, it looked like he was not breathing at all. So, we picked him up by his back legs and swung him, which dislodged some fluid from his lungs. He coughed and we laid him back down. She starting cleaning him some more and then laid down to have the second one. That one was a bit smaller and SHE is black and white speckled. I am thinking of names for them. I was thinking about Patches or Pepper for the little girl. I will know it when I hear it. =) Here are some pictures of them and some videos. Remember as you watch the videos if you want to hear the sound, then turn off the music in the sidebar. 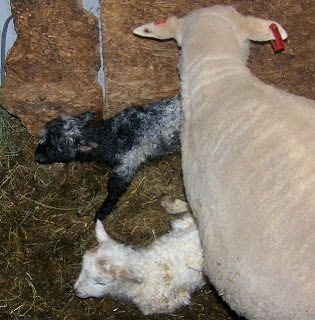 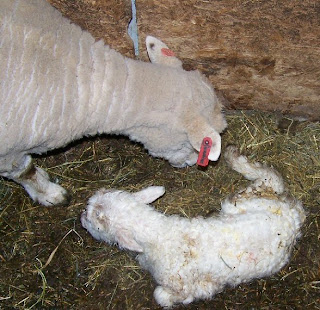 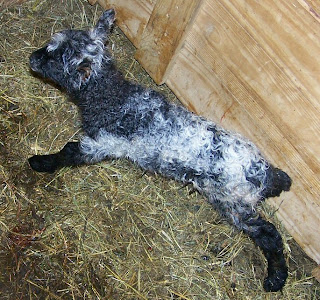 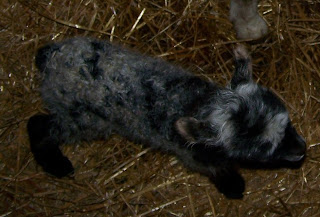 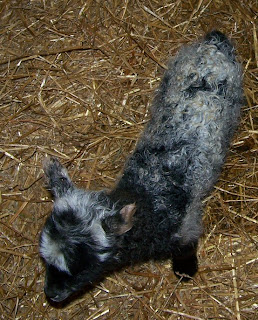 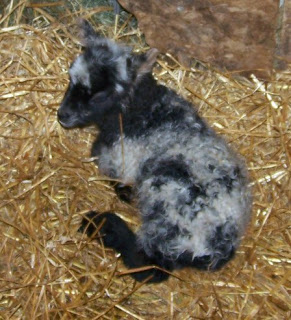 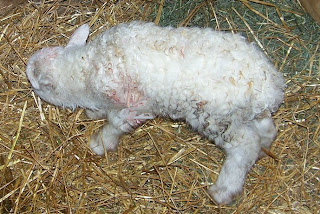 Email ThisBlogThis!Share to TwitterShare to FacebookShare to Pinterest
Labels: Lambs

What precious babies!
Spring is such a wondrous time of year!
God's creation amazes me all the time.
Wishing you a blessed day!

Awww! I'm glad it all worked out and you got a little ewe-lamb.
:-D She is pretty, too!

What a night - but what a glorious morning!

they are beautiful! So glad things worked out and both lambs are doing great. I just love seeing new births around the farm!

Sunshine certainly had a TAXING day. They are beautiful and so much fun. Congratulations!
Regina

Those pictures are so great! Love the videos too. We don't have sheep so this was a treat for me!

Daughter and I loved your video. Is that your voice? It's so pretty!

Daughter says to name them "Salt & Pepper" I was trying to think of more weather related names. Daughter also said "Windy or Shadow and Sonny/Sunny"

LOL! It always fun to play with names. You're right, you'll know when you hear it that it fits.

Congratulations on the new babies!
Teresa

This is so sweet. I do not know anything about living on a farm but I really want to someday. My husband is all city but he says it sounds better each day.
I like the name Pepper.

Praise be to God for these tiny miracles. They are beautiful!