We Are What We Eat. 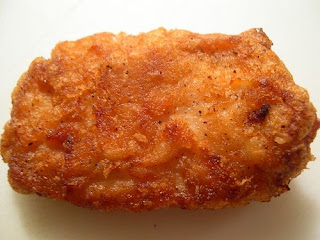 There are so many illnesses that you never heard of in the past, that are everywhere today. It seems that everywhere you turn, someone is struggling health wise or has cancer. I do believe that a large part of the reason for this, is what is done to our food. I wrote awhile back about milk and how we choose to drink raw milk from our own cow. Today, I want to write about a new subject... fast foods.

I watched a movie called Supersize Me. It had lots of wonderful information, but unfortunately there was lots of trash and bad language in the movie as well, so I don't recommend it. This reporter decided to eat nothing but food from McDonalds for 30 days. He ate 3 meals a day and he wanted to try everything on their menu. The decline in his health in those 30 days was astounding. I think the thing that struck home to me most in that movie, was an experiment he conducted at the end. He took several items off of the McDonalds menu (four sandwiches and fries) and put each one in a clear jar and let them sit. He also put a hamburger and fries from a local deli in jars. This hamburger was made from real meat. The hamburger and fries from the deli were the first items to break down and start to mold. It was amazing how much time passed before some of the items started breaking down. The real shocker though was the McDonald French Fries. After 10 weeks, they looked the exact same as the day he put them in the jar. Who knows how long they would have lasted, but one of the interns threw the jars and their contents out by accident. What did they do to those fries to make them last so long? What does that do to you and your insides?

I am currently reading a good book. It is called Omnivore's Dilemma (A Natural History of Four Meals). It is written by Michael Pollan. He basically takes four different meals and traces them all the way back. One of the meals is a fast food meal he and his family eat. His son got chicken nuggets. Here are a couple of excerpts from the book about the nuggets.

Quote #1 - Ruling in 2003 in a lawsuit brought against McDonald's by a group of obese teenagers, a federal judge in New York had defamed the McNugget even as he dismissed the suit. "Rather than being merely chicken fried in a pan," he wrote in his decision, McNuggets "are a McFrankensteinian creation of various elements not utilized by the home cook." After cataloging the thirty-eight ingredients in a McNugget, Judge Sweet suggested that McDonald's marketing bordered on deceptive, since the dish is not what it purports to be-that is, a piece of chicken simply fried-and, contrary to what a consumer might reasonably expect, actually contains more fat and total calories than a cheeseburger.

Quote #2 - But perhaps the most alarming ingredient in a Chicken McNugget is tertiary butylhydroquinone, or TBHQ, an antioxidant derived from petroleum that is either sprayed directly on the nugget or the inside of the box it comes in to "help preserve freshness." According to "A Consumer's Dictionary of Food Additives", TBHQ is a form of butane (i.e. lighter fluid) the FDA allows processors to use sparingly in our food: It can comprise no more than 0.02 percent of the oil in a nugget. Which is probably just as well, considering that ingesting a single gram of TBHQ can cause "nausea, vomiting, ringing in the ears, delirium, a sense of suffocation, and collapse." Ingesting five grams of TBHQ can kill.

This book is available at Amazon.com. If you use the button on the sidebar I get credit. =)

This is what we are feeding to our children as well as ourselves. Many people that I talk to just don't care. I hear comments like, "We are all going to die anyway." or "I don't have time to fix stuff from scratch." or "It is too expensive to eat healthy." That is their choice and I would never try to force my opinion on anyone. However, I wonder if those same phrases would still be said if their child ends up with some dread disease or cancer.

My whole point in this post is this...
Be aware of what you eat and what is in it. Be a label reader. Find out what some of those hard to pronounce ingredients are. Do your best and then leave the rest to God, because our health and well being is up to Him. I read a book that had 3 points to follow when eating... 1. Eat only what God intended as food. 2. Eat it as close to the way God created it as you possibly can (don't over process). 3. Don't make the way you eat your god, because our health is up to God. Those make good sense to me.

I now step down from my soapbox and let you return to your normal blog reading. =)
Posted by Marci at 1:23 PM

I have heard that if you order a diet soda with your fast food meal that it makes it all better.

I really liked that movie...aside from the bad language and stuff...however t was an eye opener! We do not eat Mc Donalds very often, but whenever we do I do not feel well afterwards.

Another book you might want to read on the same topic is 'Chew on This' by Eric Schlosser. I read it in and I thought it was very interesting.

I knew when I found a weeks-old half-eaten cheeseburger under the seat of my car and it looked brand spankin' new that it was not good. Not good at all. I always feel sick after eating fast food.

Finally scrolled down far enough to find it.

I agree with all you said. If we REALLY knew what we were putting in our bodies, surely we'd be more careful!