This is my last George that I have been waiting on. I thought he would go in the night on Wednesday, but when I checked him yesterday morning, he was still in his chrysalis. I was gone most of the day yesterday. Ginny and I spent the day together running some errands. We hit a thrift store and took the two fleeces I had washed to the wool mill. The mill was really neat and is run by a wonderful Christian family. You can see their mill here. I forgot to check George as soon as I got home because I was scrambling to get supper together. Michael got home and as I was walking through the kitchen movement caught my eye. There was George in the jar. He had emerged from his chrysalis and his wings were already dry and he was trying to get out of his glass prison. I showed him to Michael and then I took him outside and opened the jar. He was much smaller than any other one I had ever seen. Goodbye George and thank you again Lord for allowing me to witness one of your miracles. 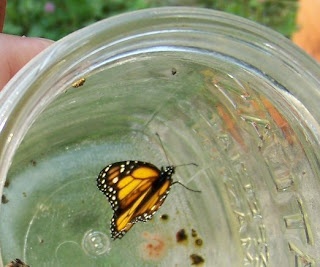 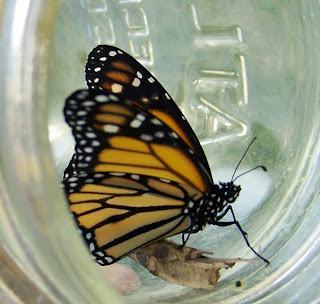 I have been wanting to make this room a pantry for a long time. There always seems to be another project that is more important. Joshua and Michael have finally started on the room. It will be a pantry, work space and canning kitchen. There is a sink and a stove in the room as well. They were already there. Joshua put up dry wall and then primed and painted the walls. He put a counter on the wall for me. We bought some metal shelving that Michael put together. He helped Joshua install a cabinet, that we already had, on the wall over the counter. I made a little bread making workspace on top of another cabinet we had. I need to make curtains to keep the morning sun off of the garlic that is hanging as well as where the canned goods will be. I will also make a skirt to go across where the counter is. I will put buckets of grain and large pots under there. We will be putting our milk fridge just to the right of the counter. I have another set of metal shelves to put in here as well as a couple of wooden ones. I will keep you posted with pictures. I get very excited when a project like this starts to actually happen. It will really help me to get organized. 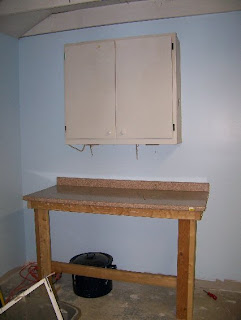 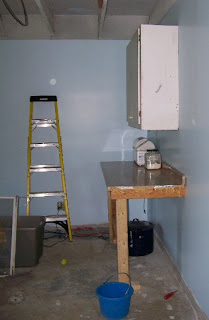 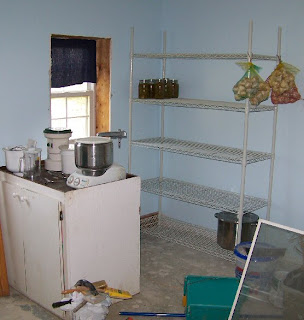 What a blessing! I wish I had a space like that for canning and storage. I guess procrastination is key huh...since Josh knows he will be out of the house soon...something about waiting till the end gets the motivation juices flowing. I ought to know! :D

I know I griped about our last remodeling adventure, but I really, really do get excited when big changes happen around our house. Congratulations on getting a new space that you will love to use! We will be moving into our new (old) house at the end of September, and then our next remodeling journey will begin. Be sure and post more pictures as the room comes together. I can't believe the wedding is just about a month away! Have a blessed weekend.
Mary :0)

I am so excited for you as you are fixing up your new pantry area! What a blessing that will be for you on a day-to-day basis!

I know you will get much use of your new pantry.Charlie was another beautiful miracle. Thanks for sharing him.
Hugs. Lisa

Your butterfly is beautiful! We definitely need to do this for school. Your pantry looks neat. Wish I had one!