Wee George grew up. He attached himself to the lid of the jar and hung in the shape of the letter "J". I pulled the lid off the jar and suspended it between 2 jars so that I had a clear view of him. I talked to the Wonderful Neighbors and they said that he would start to jerk right before he began the chrysalis process. I kept checking on him and nothing. I was talking to my husband on the phone and happened to turn around and look, and he was jerking!! I could see green appearing at the bottom of him. 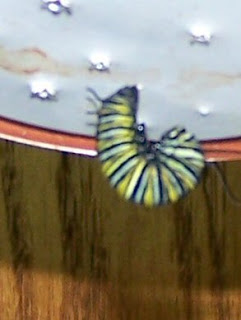 I told my sweetheart that I was going to try and film this. I did not realize that it took about forty minutes to an hour, so I got a couple of short videos of it. This first one is really dark, but you can see the green starting toward the bottom of the gyrating George. It is actually his skin splitting off of him, but you could not tell that just by watching. It just looked like the green area was growing.

You can see his antennae hanging down as well as his little row of feet. =) I still did not realize until it was over that this was his skin he was shedding. 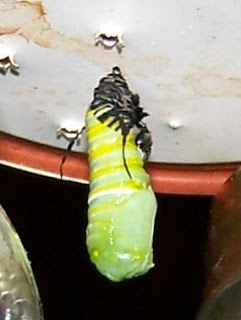 Everyone has laughed at me when I tell the story of this video. I thought the black part at the top was still his head and it was bobbing around. I thought the head was working away until all of a sudden it dropped off. I had a moment of horror thinking George had just lost his head!! I know go ahead and laugh.... Then I realized that it was just his skin and he kept working.
Here is what it looked like. You can see part of a design on the right side. There is a better picture of it below. I took pictures of different sides of it. 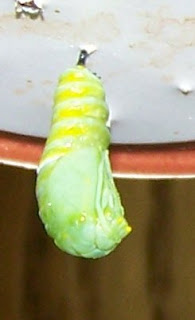 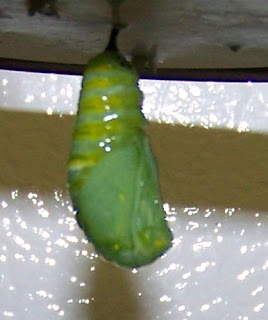 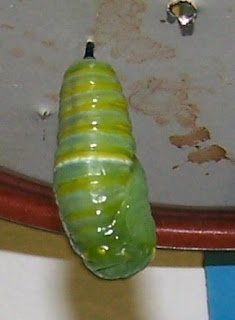 Here is the design. Isn't that neat????!!!!! See the two little black dots at the top? Looks like his eyes sticking out of the top of his sleeping bag. Ok, so I have an imagination!!! 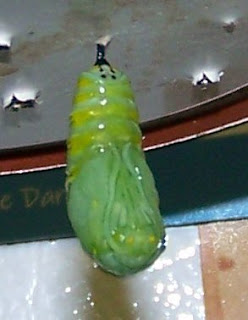 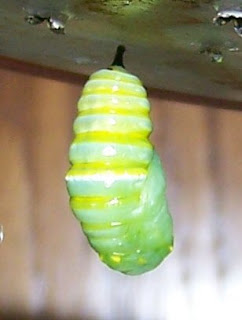 Here is the skin that he shed. 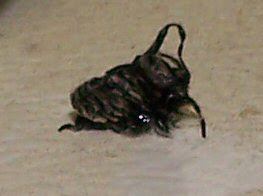 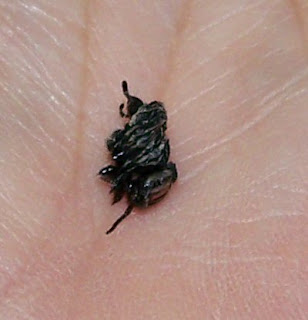 The green just kept changing, but it was hard to see what caused it. It was just so neat to watch. 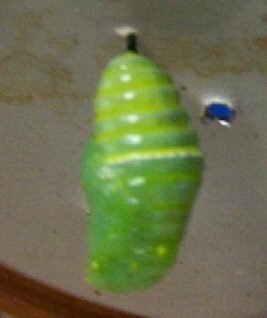 At this point, he was all done. The gold had not turned all the way shiny gold yet. 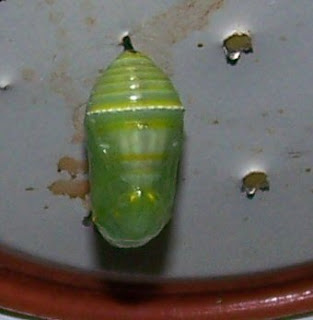 Email ThisBlogThis!Share to TwitterShare to FacebookShare to Pinterest
Labels: Butterflies

Okay, I have to laugh at myself too! :D I saw this miracle happen a few years ago and I thought his head fell off too! Thanks for clearing it up for me. :) I'm glad you got to witness the event. Obviously, I was wrong about it happening so quickly. My remembrance of the event must have been clouded by the amazing thing I was watching. :) It just *seemed* to go quickly.

What a miracle! Mason, Molly and Madelyn have a new book about monarch butterflies. They will love watching the videos you took. Have a wonderful week!

That was awesome. A school lesson before 8 am. Thanks.

Marci-My girls loved this!! Thanks for sharing it.

Wow Marci! You are so blessed to have witnessed this. I hope the children can someday watch it as well. It is so amazing to watch him become engulfed in the chrysalis.

I can't thankyou enough for these pictures! The feeling of awe and wonder at the miracle of this process just can't be described. Thankyou for taking the time to share this miracle with us. We truly DO serve a mighty, awesome, and wonderful God.

Hi Marci,
That is so amazing! Thanks for sharing this wonderful experience with us!

That is amazing! Thank you for sharing such great pictures!
~Kelli

I have seen this before and it is awesome and yes, a real miracle. Thanks for sharing this wonderful experience.