Mr. or Mrs. Anonymous had another question. They want to know how we get the cows to come when we want to milk them. First of all let me tell you this... We are spoiled with Buttercup. She has been so tame from the beginning. For the most part you could walk out to the pasture and milk her. In the last few years, she has gotten a bit more "restless" than that. She will usually stand there and wait for you to come and get her. Last night, Michael had given the cows fresh grass before he grabbed her for milking. She does not like to come when there is fresh grass. He got her up in our front yard and she jerked free of his hold and would not let him catch her. She did not run away, but just far enough to keep out of reach. She ran through our front yard. I called her and she looked at me. I was standing near where she is milked. She ran over to that area and Michael nabbed her halter and hooked her up. She is hooked up to a long lead (about 4 feet that is loose), so she can move around, but usually doesn't.

Her daughter Molasses is another story. The guys would have to chase her and catch her to bring her in. Some of the new calves started nursing off of her and since we really didn't need the extra milk from her at that time, we just let her play wet nurse to her calf and one other. When we did milk her, we had to put her in a stanchion we built that held her head still. We also got a tail holder as she was fond of hitting us with her often wet tail. If we have to milk her again, we will be adding a back section to our stanchion so that she can not go side to side. She was a real stinker to milk. She never kicked us, but she did kick over the bucket and move around and knock Michael off of his milking stool (upside down bucket).

With Clover, we are giving her a little bit of milk in water each night that she comes for. I also try to give her peanuts and apple pieces occasionally. Find a treat they like and set up a routine where you bring them up near where you would milk them and then give them the treat. Another thing is all our milkers (it used to be all our cows) have on control halters. A control halter has a chain that goes under their chin and through a metal ring. Then there is a larger metal ring on the end of the chain to keep it from going back through. If you hook a lead to it, or even just grab it, when the try to get away, it pulls the chain up tight under their chin. They don't like that, so they don't fight as hard. I would put one of those on your cow and then do the treat thing above. Maybe hook her to something, talk to her, brush her, give her a treat. Make her want to come to you.

Here are some more cow pictures for you. These are 3 little guys that we got at a day old to raise up for meat. One of them belongs to the Wonderful Neighbors. 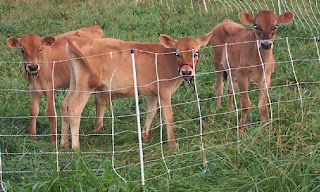 Here they are again with one of the Wonderful Neighbors.

Here are 2 steers we currently have. The darker one is the Wonderful Neighbors. 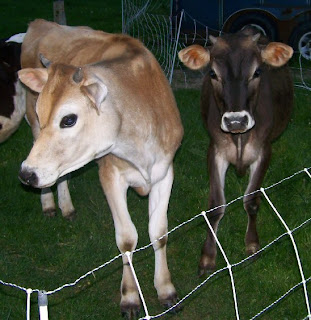 Here is Molasses with her last calf, Paddy. 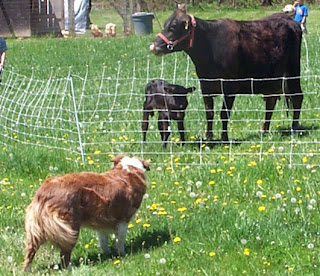 Joshua used to be our cow milker. He milked by hand. He was the fastest milker we ever saw. Of course the cow danced a bit because of his strong grip. Buttercup used to love him, but he is not around her too much anymore. We bartered with someone for our milk machine. It is old, but it does the trick. 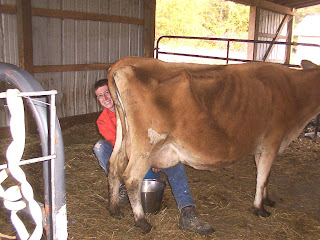 I have gone back to milking the goats by hand as its faster for me. Up to milking 5 now. I just love your cow pictures!

OK - I am a dork! I am wanting a cow, but it never occured to me that I would have to chase her down to milk her! At least I will get in better shape. I would call that kind of exercise a treadmoo.

Hi Marci, I read your blog often. We recently made the transition from goats to Jersey cow. Our family has grown a lot and we thought it might be better to have one cow instead of several goats(I will miss them).My question is about butter, do you go thru the same routine as if you would with goat milk? Do you use a cream separator or do you spoon it out? We use a cream separator with the goat milk. Do you churn with a glass churn, old fashion churn or a mixer? With the goat cream I used a mixer. I am looking forward to my cow, Belle, but I wonder if I have to learn all over again on how to do milk, butter, and cheese. Any help would be greatly appreciated.