Robin asked me some questions about making butter with cows milk versus goats milk. For goats milk you need a cream separator. For some cows milk it is helpful. However, if you have a Jersey, you will probably not need one. You can see a thick head of cream on the milk we strain. It does not take a really long time to separate either. Give it 4 hours or so and you should see a lot of cream at the top. I wrote a post here showing the cream on our milk. I also had an entire post on making butter. You can find that here.

You can make butter in lots of different ways. I usually have several gallons to get the cream off of. So, I use my DLX Mixer. In the past, if I have smaller amounts I fill a quart jar half full of cream and shake it. I do have a small glass churn, but the turning radius of the handle is so small, it gets really tiring.

Here is a gallon of Buttercup's milk. You can see the cream line. That is about a pint of cream. 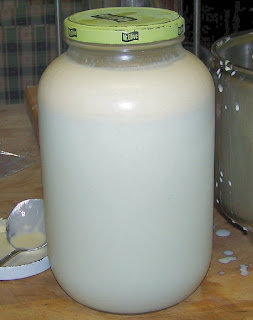 Her cream is so thick and lucious, it even stands up higher than the ladle. See the milk in the jar, with bits of cream still floating on top. 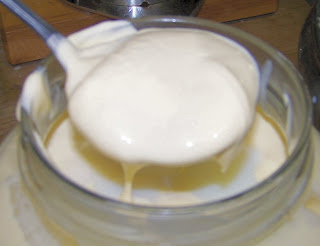 Here is the butter almost done. 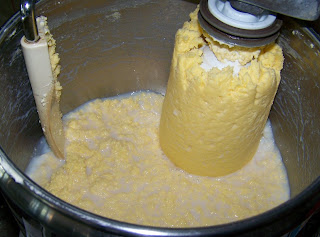 Here it is draining before I work the rest of the whey out of it. 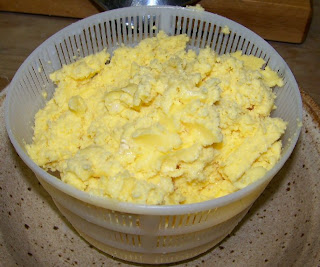 On another note about milk... Ohio, has fallen with other states like Pennsylvania to the lobbyists. The growth hormone can be used on the cows, but they are not allowed to put on the label whether the milk has the hormones in it or not. The only people in the state for it were the dairy farmers that use it. However, the pockets of our Ag people have been lined by large corporations. We got sold out for money. This is another reason to have your own milk animal.
Posted by Marci at 4:29 PM

If people don't have access to a cow, they could buy organic milk. To legally use the label of organic, they cannot use any growth hormones. That is not a state regulated thing. It's not as good as your own cow, but does give an alternative to those of us who don't have access to fresh milk (which is also illegal in some states).

Theresa, organic milk is a good option. I would steer clear of Horizon though. They are actually being sued by the organic people because they are basically a confinement system, although they would not have the hormones. It is illegal to sell raw milk here in Ohio, although you can do cow shares.

I love to see these pictures with your posts on how things are done.

They are great for our school.

Thank you for sharing the lovely pics-I wish I had a farm with cows so I could enjoy the fresh milk and butter!