An anonymous person asked us a couple of questions about our cows and how we handle them. I know that Fridays have been new episodes of "Tails" From The Farm, but I have not written the new episode yet. Sorry.... I will get on the ball or at least try to.

The two questions they asked us were in regards to what our cows eat and why we leave the horns on. First let me introduce you to some of our cows and give you some information there. This is Buttercup. She is probably my favorite animal on the farm after Star our dog. I LOVE Buttercup. She is a Jersey Milk Cow. She is gentle and loyal and gives wonderfully thick cream and milk. This picture was taken by the son of a friend of mine. Buttercup has short horns. When we got her (at around 3 years old) she already had them. 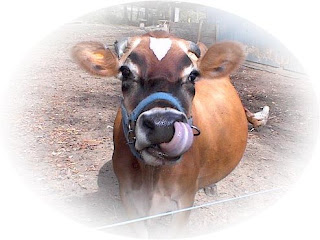 This is Molasses and one of her calves. We bred Buttercup to an old line of Jerseys that were not bred up to needing grain to keep up with milk production. Molasses was the calf from that breeding. She is naturally polled, which just means that she never grew any horns and never will. Evidently the bull whose semen we used was polled. When Molasses was born, I named her Honey because she was that beautiful shade of light brown like her mother. Then she turned dark on me and I had to change her name. =) Jerseys come in all shades from very light (almost white) to very dark (almost black). Every calf she has given us is naturally polled like she is and they are very dark. That is Paddy standing next to her in the picture... Short for Hamburger Patty. 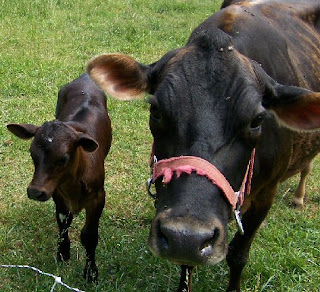 This is Clover. She is NOT a Holstein. Buttercup was bred to a Jersey bull and she is the result. We have had several people tell us that she is Jersey. One of the big indicators would be that she should be much larger than she is. Anyway, Clover is a heifer calf. That just means that she has never had a calf of her own. She is now one year old. She does have horns, but we waited too long to dehorn her, so we are stuck with them. We had one calf in Florida that we had the horns removed after they were a bit bigger and it was HORRIBLE. I cried like a baby and the calf was in shock. We will deal with horns. 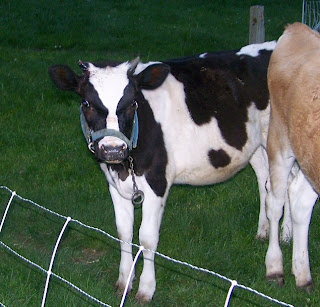 These next couple of pictures are Jersey Steers that we bottle raised and then raised for meat. They both have horns. Their horns don't get much longer than what you see in these pictures before we send them to the butcher. We have never had a problem to this point of one of them using their horns in an ugly way, so we just leave them alone. 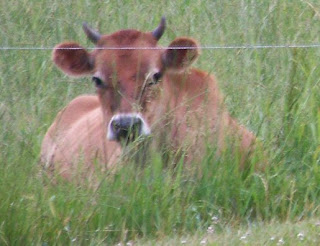 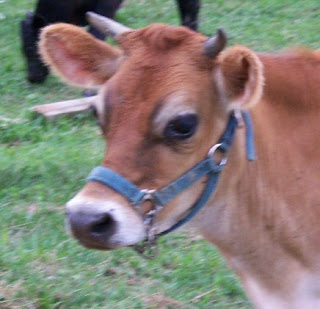 That probably answers your questions about why we didn't dehorn.

On to the other question. We used to give Buttercup grain. In fact there were times that she was up to 16 lbs. of grain a day. One spring after the grass was really coming in lush and green, we started backing her grain down slowly. The less we gave her, the more her milk increased. Not by huge amounts, but it did increase. In the end, we got her totally off of the grain and she does fine. This last winter, because the hay was not too good of quality due to the drought, we were giving her beet pulp when we milked her to make sure she stayed in shape. We also gave her some alfalfa cubes. We believe that cows were intended to graze and not eat grain. They get some grain from the grasses that get too long, but for the most part it is grass or hay for forage. They have all done well. If this does not answer you questions, let us know and we will try to help you.
Posted by Marci at 12:20 PM

Hi sweet Marci!
I am hoping to have at least one dairy cow if we move to the country. Buttercup does look like a sweetie! If (or when) we move, I know I will have a LOT of questions for you :0) Keep up the great posts - I always learn a lot about country living.

Thankyou for the information. We didn't have any luck not feeding our first Jersey the dairy mix and we have been wondering what we could feed instead. As for the horns, we have a young heifer whose horns are too big to burn off now so I guess we are stuck with them, too. Thankyou again.

I forgot something. How do you get them to come for milking without feeding grain and to stand there while being milked? :-)

Hi Marci,
We enjoyed reading this!

~Have a wonderful Weekend!

I enjoyed learning about your cows.
Buttercup is so cute. Have a great weekend. Lisa~