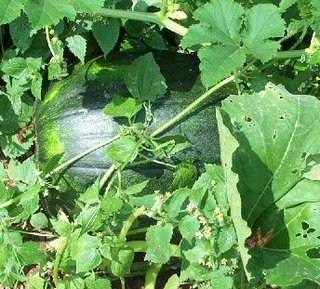 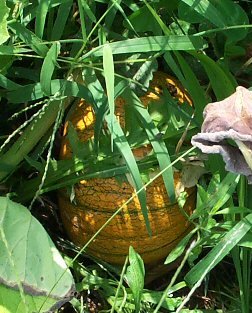 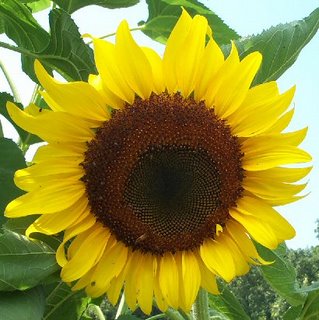 An update to the haying story from yesterday... We ended up getting around 300 bales of hay put up in the barn all dry and snug before any rain hit. PRAISE THE LORD!!!!

The first picture at the top is one of our large pumpkins. We will use these to sit out around the porch, etc. (we don't do jack-o-lanterns). Then before they go bad, we will bust them in the pastures for the animals to eat. We know of someone who uses pumpkins in this manner to worm her animals and actually has a zero worm count. We will save some of the seeds as these are open pollinated. I will plant them next year.

The second picture is of one of the small pie pumpkins. They are also open pollinated. I hope to put up some pumpkin for this winter. I LOVE pumpkin pie, pumpkin pudding, pumpkin bread, pumpkin fudge... I guess you can say that I just love pumpkin anything.

The last picture is another sunflower picture. I had a bunch more pictures I would have liked to put up the last couple of days, but I am having to try all sorts of tricks to even get a picture up here. =)
Posted by Marci at 4:15 PM

Hi Marci,
We just counted our sugar pumpkins in the area within our hoop house, and looks like there must be about 8 of them. The vine almost took over my herb garden, and I keep pushing it back. Next year I'll have to plan better!

I also love, love ,love anything pumpkin! I have a really good pumpkin bread/muffin recipe that we all just love and I make it quite often. Thanks for sharing the pictures!

Maric pumpin fudge could you please post the recipe? I've never heard of that before..

Great pictures you do a great job.. You are some busy.. Nothing like your own veggies... Brenda

Brenda, I have never made much fudge at all. I usually buy pumpkin fudge and pumpkin ice cream in the fall. It is the only time they sell it.