When I have a vehicle to get about in I want to take some classes. One of the first I would like to take is cake decorating. I have done some cake decorating in my time and I even have the tips and bags, etc. I want to learn more. I bought 2 pans this winter that were on clearance. One was a snowman cake pan and one was for snowman mini cakes sort of like cupcakes. I had not used them yet, so I decided to make them for Bible study on Thursday night. They turned out so cute, and then I remembered..... Once I put the icing on, all the details would disappear. I did not have time to make the stiff icing and color it and do a decorating with tips job. For the snowman cake, I went ahead and made white icing and iced the whole thing. Then, I had my husband bring me 2 tubes of colored icing from the store and a pack of M & M's. He brought me black and green. I made his hat black. I put 2 little green leaves on it and stuck a red M & M in the center of the leaves for holly leaves and a large berry. I gave him a black mouth. I put a green scarf on him. His eyes were blue M & M's, his nose was an orange one and he had brown buttons. 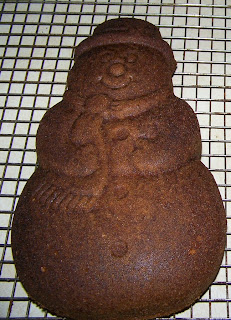 I made a glaze for the little ones and just poured it over them. 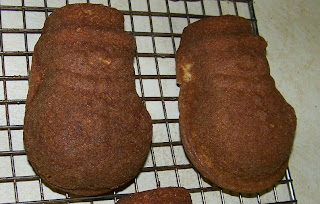 I was really disappointed on how they turned out. I did not even take a picture of any of them after they were iced. The neighbor children loved them anyway and they tasted good.

One of the things we talked about at Bible study was how the Bible makes it sound so simple and it seems so hard. I shared with them this post over on Tina's blog. We think we have to control everything. We think we are the ones holding on, when our holding on is really doing nothing. When we ask one of our children to do something and they obey with a sweet attitude then everyone is happy and has joy and peace. The child, the parent and the family or people around them. Everything in the Bible means something. God gave us pictures in the scripture to help us understand His nature and teachings. One is that He is our Father. If we will put aside our own agenda and JUST OBEY (very simple) then we have peace and joy, we please our Father and those around us can sense our peace and joy. We are the ones who make it hard by going contrary to what He is telling us to do.

My Mom used to tell us a story that a missionary told her. I want to say they lived in Thailand, but I am not sure. The missionary came out his back door and saw his son playing at the back of the yard. His son looked up and saw his dad. His face lit up and he was going to run to his daddy and welcome him home with a big hug and kiss. He started running toward his dad. The dad saw a snake (I think it was a cobra) in the middle of the yard. He yelled out to his son to stop. The boy immediately stopped and waited. The dad walked over to the side of the yard and back to the boy. He picked him up and showed him the snake. He showed him that his obedience might have just saved his life. It was a simple thing that he was asked to do... Stop. He could have figured that he would ask his dad why and keep running, or just ignored him and kept on coming. After all, he was going to hug his dad.... isn't that a good thing?

I think of Moses going before Pharaoh. What was Moses asked to do. He was told to speak the words that were given to him and even then the words were spoken through his brother, Aaron. He was told to throw his rod down. God did not ask him to turn it into a snake, just throw it down. It was a simple thing. Hold up your rod, Moses... and then GOD parted the sea. Strike the rock, Moses... and then GOD made water come out.

What a great post, Marci. Thanks for sharing your wisdom.

I really appreciate your obedience in posting those pictures of your cakes. They are very cute! ;-)

I struggle so much with obedience sometimes. Thanks for posting. And I agree with Ginny...thanks for obediently posting the cakes. :D

Do I struggle with obedience?
Ouch!

OBEDIENCE & FREE WILL!!!! Marci those are the two things that my Sunday School teacher loves to pick on me about. (lovingly she knows that these 2 things are a struggle for me)Free will makes me fear that my children will die one day without accepting Christ as their Savior. Our life with Christ is all about obedience & if I was obediant I wouldnt fear the FREE WILL thing! I can make a moutain out of a mole hill! God has a simple plan for us to follow but its when we dont follow it....thats when things start getting hard. Wish I had a chunk of that cake & a glass of your milk right now!! lol

Thank you very much for this peaceful, normal blog in such an abnormal world. My fiance recommended it to me a few weeks ago. I love opening it and let the good music play.