I have heard so many people talk about how prices are going up at the grocery store. I ran into someone I knew at the store recently and they said that almost everything that they bought had gone up by 20% or more. She said it had gone up that much in just one week. I had another friend tell me that she can't remember ever spending as much as she did this last time she was at the grocery store. She hardly bought anything junk food, and spent over $250. I have been telling people at my co-op for over a year to stock up on wheat because the prices are going to go sky high. I just received the flyer with the monthly specials from my co-op. They always have bits of news at the end of the specials. Here is what it said this month. "The international market for both conventional and organic grain has gone haywire. The misplaced emphasis on grain ethanol (as opposed to sugar ethanol in Brazil) and growing foreign markets have resulted in record high prices for conventional grains which also forces up organic prices. Prices for organic milling wheat are up 300% from last year! Almost every other grain has gone up and is in scarce supply. The only grain that has not shot up in price as much is rice so get it while it's cheaper. Worldwide demand and growing foreign economies are literally eating up world grain markets so prices are rising and may stay high for a year, or years to come. The current economic craziness means that food, worldwide, will become an issue (or, a bigger one) in the years to come. Perhaps, when the dust settles, farmers and food workers will regain the respected spot in society that they deserve." You need to be stocking up on your grains now. Are prices going up where you are? If so, are they going up a lot or just a little? Are you prepared or preparing for upcoming shortages?

I still feel that more than anything we need to be prepared spiritually. I want to stock up on God's Word. I need to get back to my memorization I was doing. I want to have large portions of the Bible memorized. Some day that might be the only Bibles we have. If you haven't noticed look around. Christians are the only ones that you can say bad things about and the media and government don't care. If you pick on any other group because of race, religion or lifestyle and everyone screams. We as Christians need to sit up and take notice. We need to make sure that we are prepared for what may come.

Well, here is my knitting sampler. I am still not done. Ginny has been a BIG help to me. I have bugged her to death. She is very patient and encouraging with me. I have done several types of ribbing. The little pink square is a sweatshirt style pocket. All the other pink is just different sorts of striping. I can't wait to get to the fair isle part. 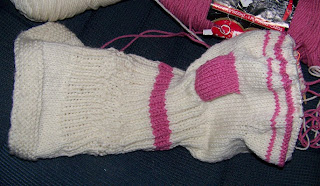 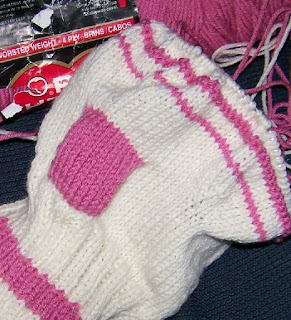 Email ThisBlogThis!Share to TwitterShare to FacebookShare to Pinterest
Labels: Bible, Knitting, Stocking Up

The misplaced emphasis on grain ethanol (as opposed to sugar ethanol in Brazil) and growing foreign markets have resulted in record high prices for conventional grains which also forces up organic prices.

I live right in the heart of Ethanol/corn country,Iowa, and the above statement is not correct. We have had a record surplus of corn for the last three years and the record yeilds are projected to continue,barring sever drought. What is raising the prices of grain, food, clothing etc. is the high cost of gas and diesel. We are small farmers plus we own a small trucking company and we have seen our fuel bill just about double. That cost HAS to be passed on. It is a trickle down affect but it DOES trickle down. If it costs me 50% more to get my product or produce to you I have to pass that cost to you. Just my 2 cents.

Hi Marci,
We just wanted to stop by and say Hi! Your knitting sampler is looking great!

The sampler looks wonderful, darling! You are doing just fine. And you thought you couldn't do it... ;-)

Patti, I agree that fuel has a lot to do with it. I was quoting what my co-op news sheet said. The droughts really effected the wheat out west last year and this year. So, there is some truth to that part.

Hi Marci, we've been warned over and over to stock up on grains. Jonathan was figuring what it would cost to raise chickens this year, and he figured adding some grains (besides moving them around in tractors) would cost $14.00/chicken! I can't think of too many people who would buy them for that price, since we'd have to add more for profit as well. I have to keep my eyes on the Lord, since it's just not possible to stock up at this time.

On the subject of chickens and grains...I was talking to the guy to stocks eggs at our Wal-Mart and he said he raises game hens for eggs because they eat such less grain. This way he wasn't paying more for grain than he would for eggs vs. the regular chickens. Do you think that is true? I had planned on getting chickens next year, but fresh organic eggs could be out of the question for me if I can't feed them through the winter!

Regarding the game hens. I am not sure on the cost - which was, of course, your question. But they are a very hardy little bird. I actually like their eggs the best of all the chicken eggs. Since they are smaller - I sometimes added an extra egg to a recipe - but fried or scrambled they are tops. My dad also used the game hens for setting. He always said they are the best brooders out there and will set any egg you put under it.

Hi Marci,
I just had to comment on this post because I did all my major monthly shopping this past weekend.
We live in the city and although we have gardened in the past, we had planned to sell our home a while back and had torn up our raised beds. We will be putting them back in this spring. I do most of my shopping once a month and only purchase supplemental things, i.e. milk,fresh fruits/veggies-as the month progresses. Our food budget for our family of six is $400 a month-including paper goods,beauty products and laundry/cleaning supplies. This weekend alone I spent $477 and still have the remainder of the month to get through. When I'm nearly $100 over my budget and I still have 2 1/2 weeks left in the month(and really it's 3 1/2 weeks before I'll do a big shopping trip again)-that sort of scares me. I try to remember Matthew 6:25-34 and not let it bother me. The truth is that we don't have $100 extra in our budget so we are going to have to make even more cuts to our budget in order for me to be able to continue staying home with our younger children.
My dh agrees with Patti though and feels strongly that the gas industry is what's hurting the economy the most. The bottom line is just as she said-the merchants are paying more for the product because it's costing more to have it delivered and they must then pass on the extra cost to the consumer. :-{
I have no answers-I do know that there are many families in our area that are having to make drastic changes and cutbacks-I think it's definitely a sign of the times.
Thanks for this post,
Michelle
BTW-I love the knitting sampler-I would love to learn - I know of a knitting shop in our area that offers lessons, but haven't made time to get over there and now it looks like it will be a long time before I'll have the funds for lessons anyway-how wonderful that you have Ginny to help you learn.:-)