I know that many gadgets were created to save us time. I look back at all that our foremothers had to do and wonder how they got it all done. If you go back far enough, they had to spin the wool and weave their own cloth even. Usually their houses were much smaller and they had hardly anything to speak of if you compare their kitchen with a kitchen of today. They did not have vacuums, because they did not have carpets. They beat and shook the rugs and swept the floor with a broom. It takes a lot for a broom to break. My friend Ginny has one that she has had since she was married (around 25 years). It even has a name, although I can't remember what it is. =) She can correct me if I am wrong, but I do believe it is a broom she told me about. I have a vacuum. Vacuums break more often and cost more to replace. The one I have is supposed to be a wonderful vacuum. It is an Orek. We got it because it will do rugs, cement and hardwood floors. It does a great job of picking up dirt, but it shocks me when I use it. I have gone round and round with them about it. I have had 3 different ones, but it still shocks you. I don't care to vacuum very often, it is painful. =) I like a broom for those areas that there is not a rug. I tried to pull the rug up in one area, but it has been down there so long and probably glued to the floor that it will have to be scraped up. The women of yesteryear had a few pans and bowls. They made do. A pan served multiple purposes as did the bowl. I received a catalog in the mail yesterday. It is very small as far as catalogs normally go. It is not a full size and it only has 36 pages. I took all the following pictures out of that one catalog.

This is to make shish-kabobs on your grill. Is it still a shish-kabob if it is not on a stick? 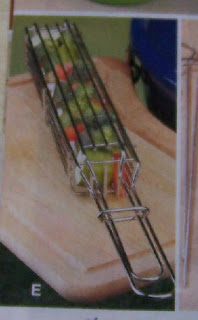 This is something that you can cook things in on your counter top versus your oven. It says it cooks in half the time. 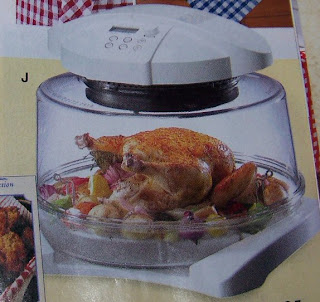 This little gadget roasts garlic. See it's cute garlic shape? That is so you don't forget what it is for. 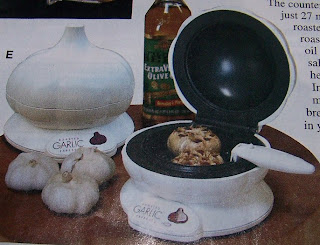 This one made me really shake my head. How hard is it to slice a banana. You can even do that with a dull knife. Even a child could do that. I guess they thought if an apple slicer would sell, then a banana one would too.

You can hard boil, soft boil or poach an egg with this item. This is a little more old-timey. It will peel, core and slice your apple into rings. This can actually be handy if you are dehydrating apple rings or making apple pie in a jar. The pieces of apple are all uniform in size. 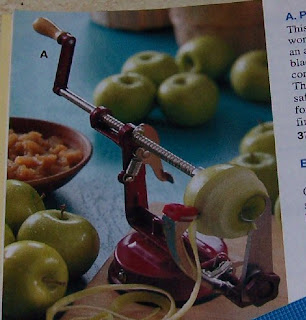 Here is a grill that you can grill sandwiches on your counter top instead of your stove top. 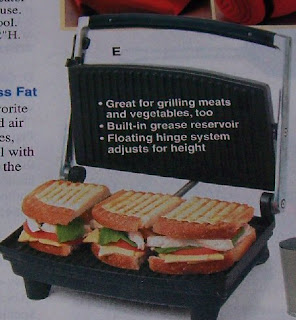 Here is something that you can deep fry things in and also something that will cook your hot dog and heat the buns at the same time. It even comes with mini tongs to use to pull them out when done. 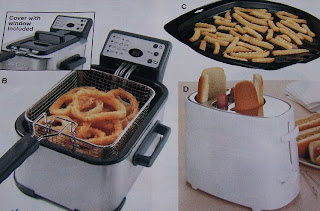 This is a wee cast iron pan made just for melting butter in.

Now, I am not saying there is anything wrong with owning any of the above. I am just showing you how we have gotten away from simplicity in our society. Where do they store all this stuff.... in the kitchen.... SO.... they need larger kitchens with more cabinet, counter and pantry space. To me many of these items would be more work and hassle to get out and clean than to just use a pan or something. We like to look at kitchen gadgets and things like that. We kept seeing the popcorn pan with the stirring handle on the top. We know several people who have them and use them often, so we bought one. We used ours several times, but I noticed the last few times we made popcorn, we just used a pan with a lid. Are we really saving ourselves time and energy? Some tools are very useful. I have a grain mill and a big mixer that I make my bread in. We got away from making all our bread for awhile, but are getting back on track. We grind our own wheat for the freshness and the good stuff in it. An electric mill is a real plus for me. Also, the mixer kneads 4 to 6 loaves worth of dough at a time for me. It kneads it for 10 minutes. That is 10 minutes that I try to use in cleaning up the bread mess. Some of the above items might be a real tool for some of you. We all have different needs in our kitchen. Some people have soymilk makers. It is so much cheaper to make your own than to buy it. So, it makes sense for them. Some people have rice cookers. I have even seen a plug in gadget for baking potatoes.

I want to simplify. It is so hard to do that when you already own things. Some are easily parted with, but others are very hard to get rid of. I have heard people say that if you have not used something in a year then you should get rid of it. Sometimes that seems ruthless to me. =) What gadgets do you have that are really a useful tool to you and why? What are some other gadgets not mentioned or shown above you have seen on the market?
Posted by Marci at 2:01 PM

LOL! I believe you are talking about "Broom-hilda". She has been banished to the shed, but she is still around and still used...
:-D

Use my Bosch Universal almost everyday. Life would be hard without our Bunn (smile). Love my new whopper chopper given to me by my "wonderful" neighbor. Also like my oil spritzer thing, but could live without it. I think I could live with out my deep fryer too, we don't really use it that much. That apple peeler thing is a MUST during apple canning season. Have always lived without a strawberry capper, but love my tomato corer during canning season too. Umm.....OH Jar grabbers are a must too, although you could just use a towel I guess. So many gadgets to think of -- so little time.....The neighbor

Oh Yeah I almost forgot, I like a cotton mop versus a squeezie one. I hate those things. I can twist off my cotton mophead and wash it, I can't do that with the other and that is handy.....

An older friend of ours went to Europe for about two months. When she came back, she got rid of half of her kitchen gadgets including utensils, bowls, and cups/glasses. She said that she learned in Europe that those who had less actually had more. She spent time in her kitchen looking for the "right" spatula or the perfect size bowl for mixing or ending up with cups that she never used because she didn't really need as many as she had.

It does make sense to get rid of those things that are supposed to make life more functional but only add to time consuming activities like finding them, getting them out, or putting them away after using them.

After moving 4 times since we have been married (not even 6 years) I have cut down on many things. The only new gadget I have is a rice cooker. Now granted I can do it on the stove, but with 3 little ones the rice cooker has been a life saver since I don't have to keep watching it. But I agree...that many gadgets are just a waste of money. Have you seen the one that makes S'mores indoors....It's not a true smore if it isn't made over a fire. :D (but I have been known to make some over the grill. ;)

I too have been trying to simplify - I just have a few favorites and am de-cluttering the rest. I haven't gotten to fully doing the kitchen yet - I think I am subconsiously saving that for last as I am sure it will be the toughest place. Right now I am still in my bedroom and craft area.

One gadget that we just couldn't do without is our electric StirCrazy popcorn popper. We are popcornaholics! This makes the best - and easiest - popcorn we have ever had - and we have tried a bunch of ways - including using just a pan on the stove for years (our 2nd favorite way to pop.)

We serve our popcorn with extra light olive oil on it instead of butter. We all like that even better than butter - and my Dh uses a huge bucket of popcorn (I think about 24 quarts) for snacks for training classes he does for teachers. They love it better than butter too.

I am guilty of owning too many gadgets....I just went to a Pampered Chef party and ordered several new items.

The banana slicer is a little over the top as well as alot of the items you showed although I do have the sandwich griller and hardly use it...hate washing the thing.

I really liked your post today...made me do some serious thinking!

Hi Marci,
Since moving to the country I have discovered a lot of things I can do without, but I can't do without my crock pots! I have also discovered something I really need -- BIG POTS!

One thing I use alot is my electric frypan--I can make pancakes in it, or a big batch of stirfry... I can cook sausage on one side, then do the eggs in the other--it's a great tool!

I also use my kitchenaid mixer alot, and so does my dd. It is fairly new to us (just over a year) and is already dear to our hearts! LOL
We also love the breadmaker. I make bread, rolls, and pizza dough on a regular basis (I wore one out, this is my 2nd.
On of the things I had but didn't use, or like, was my G. Foreman grill. It was too much of a pain to clean, and it took up too much room.
My mom loves her small one, but used to complain because it was too small, so....I gave her mine! She's thrilled, and so am I---to get the space back!