We had good friends from , the Candy family, that came to stay with us about 2 months after we moved in. Mr. Candy and his boys were such a help that week getting things done. There were some barn siding that needed replaced and some work out in the barn and around the property. We had some good snow (for us it was good, for them it was nothing) and the children all got to sled. Even the Dads got in on the fun. They would go down the driveway and cross the road. They put a small ramp of snow across the ditch on the other side. There were contests to see who could go the furthest. We got some good pictures. We girls spent a lot of time in the house by the warm stove. I taught Mrs. Candy and her daughter how to play a song on my dulcimer and they played for us.

We had put in an order to have them come and hook up our electricity. The poles had already been put in, but they needed to hook the wires to the box in the basement. One morning we were all still in our jammies and robes. We did not hear trucks out front. All of a sudden there was a man’s face in the kitchen window. Now that window was well off the ground, and no man could stand there and see in, so it was a bit of a shock. They had come to hook the house up and he was in a bucket being lifted up to hook up the wires up on the house. We were so glad we had our robes on. I was excited to get the electricity, but there was also a side of me that was kind of sad. I loved living the way we did. They hooked it all up. An electrician had already been there and put the box in and also he put in a total of 5 outlets. We had 2 in the kitchen, 2 in the office and 1 in the basement. We had to clean out our fridge. It had been turned off in (it was used up to the last minute) and it had not been left open to warm up. It was FULL of mold. Mr. Candy set the boys and himself to clean it up. Once that was done, it was plugged in. I had not realized just how quiet my house was, until we heard that motor running. It was amazing just how loud it was after the silence. We used the other outlet in the kitchen for a lamp or if we needed to plug in a mixer or something. We hooked up the computer and I put in an order for internet service.

Other than a lamp in the kitchen and one in the office (both very small) all of our lamps burned kerosene. I had to learn to trim wicks and remember to keep them filled and the chimneys clean. We also had flashlights in several key places for quick use.

We had all of the animals in one pasture. The chickens we brought with us just roosted in the barn. We ordered more chicks in the spring. We were going to build a chicken coop before they got too big for our brooder. Our brooder was a large cardboard box in the basement. We had the heat lamp down in it and then covered it with beach towels and blankets. Star has always had a love of baby chicks. She trembles with excitement when they come in the mail and she loves to sit and watch them. She would always go down to help deal with the chicks. She would jump up and look down in the box. The chicks grew fast and we had still not built a coop. They really stunk up the basement. We had ordered Buff Orpingtons. We made a very small moveable pen for the yard to buy some more time. Joshua had expressed an interest in learning about framing. We bought him a book all about it and he was anxious to try his hand at it. We decided to make a homeschool project out of building the chicken coop. I had built forts and other little structures with my brothers. We found the plans for the chicken coop we wanted. I had Joshua make a materials list and I made one as well to see if we matched. We did and I think it surprised him that his Mom had come up with the right amounts. We went to the local building company. It was a very small operation in a very small town, but they were so helpful and friendly. They helped us get everything together and loaded in the truck. They even had some old second hand doors and windows we bought for a couple of bucks each to use. Joshua and I looked at building this coop from two different view points. He saw this as a great framing project. Joshua has a cabinet maker’s eye. If he does any work for you, it WILL be plumb and even and perfect. To him this coop was his first work of art. I love art and I like for things to be fairly plumb and even. However, these chickens needed to have been in this coop 2 weeks before and they were out of room in the little pen we had them in.

We decided where in the pasture that we would put the coop. We got started with putting the floor joists on the skids. There was not much disagreement with the flooring. Then we started on the framing for the walls. I would hold something up and say, hammer it. He would get out the level and say, it needs to be moved a bit. That was OK at first. Then it got old on both sides. We never did fight over it, but I ended up trying to make him see that this was a chicken coop, not a house for people. It did not need to be plumb, but it DID need to be done so that our large chickens in their crowded quarters would have a home that they could move around in. So, then we made a game of it and called ourselves “The Close Enough” chicken coop builders. We made up sales slogans to go with it. We did a great job. The inside had 2 rooms. One was just a narrow entry area that we kept the feed can in. It was separated from the main part of the coop by a wall of chicken wire. The human door went into the little room and there was a screen door to go into the main part of the coop. We also had a small chicken door on the front that could be opened from outside with a little ladder for them to get down to the ground on. We made the chicken door as small as we could so that the goats would not try to get in. We had actually seen a goat do a version of the army crawl back in to get in through the chicken door to get their feed. We did not make it small enough, though. Dear, dear Ellie was trying to wedge her self in through that door. We nailed a board across part of the opening from the inside. The chickens could still go in and out, but goats could not. The goats drove us nuts the whole time we were building it. They would jump up on the coop floor and dance around and playfully butt us. They left goat berry gifts all over the floor that we had to sweep off. We were finally ready to put the chickens in their new home. We caught the 4 in the barn that we had brought from . If you wait until a chicken roosts for the night, they are very easy to catch. Then we put the Buff Orpingtons in the coop and closed it up. We left them locked in for several days, so that they would know it was home. The chicken dilemma was over.

We decided that we needed to paint the coop to help preserve the wood. The barn was also just plain T1-11 that had not been painted. We went to the small hardware store in the next little town. We asked their opinion on paints, etc. They suggested that we stain it to help preserve it. We brought home a brochure that had lots of color chips on it. We each took a turn looking at the colors and studying them. Then we each went off by ourselves and picked our top 3 favorite colors. Number 1 got 3 points. Number 2 got 2 points and Number 3 got 1 point. Now, if you know me at all, you know that I LOVE blue. However, I chose the blue as my second favorite. A dark red, was number one. One of the guys picked the same blue I did as their number one choice and the other also had it as second choice, so the blue won. We painted the barn and the chicken coop. I love to paint on things, so I added some touches to the coop and barn. I painted sunflowers on the big door to the coop. I also painted “Poultry in Motion” on the door. Then over the little chicken door I painted, “Thou Shalt Not Henpeck”. =) The end of the barn that faced the road was just plain. So, I painted on a board to look like a window. Joshua made some shutters for me and we put up a board with our farm name on it as well.

Here is a picture of the coop after it was painted. 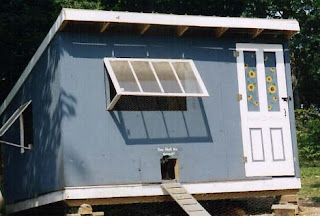 Here is the end of the barn facing the road. I also had put up some shelves with old buckets and pots on them. I was going to plant flowers in them. 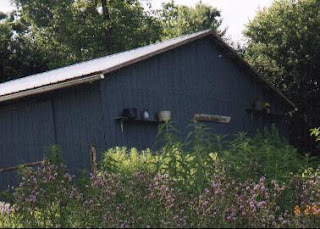 This picture is after I put the fake window and the sign up. 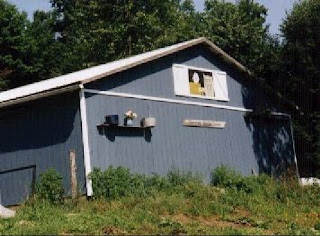 This was the side of the barn that faced the house. See the hitching rail? 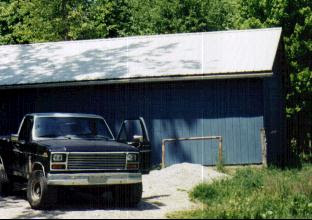 Another great part of the story. I loved the part about the electric man peering into the window and the chicken coup is adorable!

I'm so sorry about your Uncle. I will be praying for his family and for your Aunt.

I am LOVING this story! Thankyou for writing it. I can't wait to read more!

5 outlets.... woo hoo! It is amazing how many outlets and switches the average house has!
I remember your faux window and still love it!