Sometimes it really pays to live in or near the small towns in America. If you have read my blog for any length of time, then you know that my son is betrothed to be married this year. His lovely bride to be lives in Florida. The newspaper down in their area is not necessarily from a big town, but as often happens in Florida along the coast, the towns all run into each other and makes for a larger metropolis area. They put the betrothal announcement in their paper. The lady asked for a credit card number which they gave. What they did not do was ask how much it would cost. When it ran in the paper, it was 1.75"X5". When they got the bill it was $150. This is the same paper that when my Mom died and we put the obit in, they charged a huge amount for the obit, and still wanted $60 to put her picture in.
Now, come farther north to the little county seat town that is near us. They have a Monday through Saturday paper, that usually has 2 sections. The announcement ran and was 4.25"X5.5". I called to see how much it was going to be after hearing how much they paid. I was told it was free. =)

We also have a little hometown bank. It does have several branches (maybe 10), with only 2 in our county and the rest farther north. I love our bank. The first time we did any business with them was when we applied for a mortgage. They were so friendly and helpful. We decided that we would open our checking account with them. I went back about a week and a half later and as I walked in, I was greeted by name. They have always remembered our faces and names. I can call them and if I get certain people (ones I know well), I can just say, "This is Marci. Can you please transfer money from our primary checking to the mortgage for me?" They ask me how much and say OK. A couple of days later, I get a receipt in the mail. They know my voice. I don't even have to say my last name if it is those few I have learned to know well.

My son, got 2 pieces of mail from the bank this past week. One from each of the branches in our county. When he opened each one up, it contained one of these... 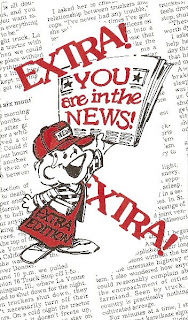 When he opened it up, there was a folded copy of his betrothal announcement from the paper in a little flap. When you removed it, this is what you saw.... 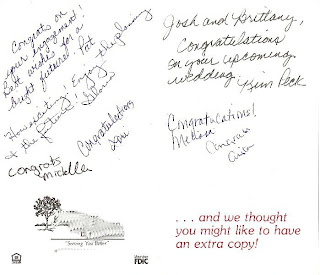 I LOVE this bank.
Just another cute story about this bank. My friend Ginny and I must look a lot alike. We have often been confused for each other. When we both lived in Florida, my neighbor saw us pulling in our driveway. She told Joshua that his aunt had been there. None of his aunts lived in Florida. We were wondering who was in town. Then when I talked to Ginny, she had been there and talked to the neighbor. The neighbor just assumed we were sisters. After we both moved to Ohio, I went to church one day and this woman came up and just started chatting away to me. I could tell that she thought we knew each other, but I had never seen her before in my life. I very kindly told her that she must have me confused with someone else. She informed me that we had a long conversation the Sunday before. I grinned and told her she must have talked to Ginny, because we were not there the Sunday before. When Ginny and her beloved moved here, I bragged on and on about our bank. They opened their accounts there as well. Then they realized that there were several banks that would allow her husband to bank down where he worked as well as up where we lived, plus another bank was not too far from their home. So, she went into our bank and told them she was there to close their account. The teller looked all sad and said, "You aren't going close the Amazing Graze account too are you?" She grinned and informed them that she was not me. It was too funny that she even knew who they were talking about. The Wonderful Neighbors also have opened an account with our bank because of our bragging. =)
Posted by Marci at 11:30 PM

Your bank sounds wonderful! We use a small hometown bank, too, and we've been very impressed with their service. Still, we've not had quite the experience that you all have.

That's why I love our small town too! The Evansville paper charged 200 bucks for a picture in an obit - our weekly paper is free. Same with engagement, weddings and birth announcements.

I wish our small city was just a little smaller. We have a lot of hometown things, but not the personal touch of a sweet small town. I love, love the precious pictures of your baby lambs. What fun they must be to watch everyday. Have a blessed and restful Sunday.
mary

I love living in our small town here in Holmes County, Ohio! I love going to the bank and post office in Big Prairie:-D

Yes, I agree that small towns are the best! It's somewhat like stepping back in time. Life seems just a bit slower.