Puttin' Up The Hay 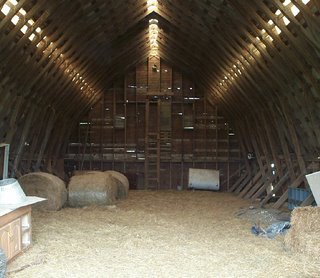 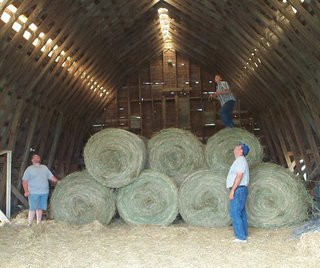 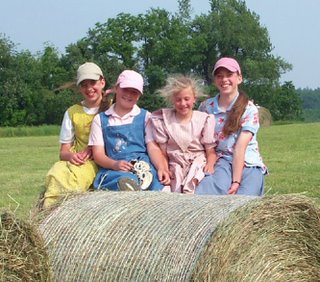 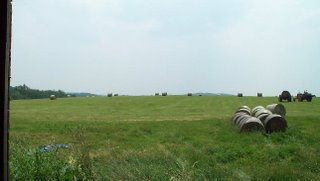 We had our hay cut by a local farmer last week. We thought for sure, he would come rake it and bale it on Saturday. Well, Saturday came and went with no sign of him. Early Sunday morning, we saw him drive out there and check it to see if it was dry. We were getting ready to leave to meet with our fellowship when the rake and then the baler headed out to the field. We had an 80% chance of rain last night. So, that meant we had to come home after the meal and put the hay in the barn. He always does our first cutting hay in the huge round bales. We have a smaller tractor and it will not lift a bale high enough to stack them two high. We were going to borrow a friend’s tractor and Michael was going to drive one tractor and I was going to drive the other. When we told the fellowship that we had to leave to go and put our hay away, they almost all came to help. The one family even drove their tractor over. So, everyone (men and young men) took turns on the tractors or in the barn. The other tractor could lift a bit higher than ours. They would put it up there and then men would push and hold it while the tractor pulled away. Then they would heave it into place. The bales are at least 500 lbs. The one family has 10 children and the other one has 4. So, we had babies, and little ones running around (away from the tractors), and the girls climbing up on the big bales still in the field. It ended up taking quite a long time, but we had fun doing it. I went and got some ice and water and some ice cream for treats during the middle of it all. It was very hot out there, but there was a wonderful breeze blowing.

In past years the man who bales, has let us use one of his tractors to stack the hay. His would allow us to stack them 3 high. He sold that tractor though, so we were on our own. We ended up with 79 bales and they barely fit in the barn. Praise the Lord, it all got put up before we got any rain.

The first picture is the empty barn. This is the top part of a bank barn. The bales you see in the barn are yucky hay from last year that we did not use.

The second picture shows some of the men trying to roust pigeons out of the rafters. They can sure ruin some good hay.

The third picture is of some of the girls posing on a hay bale.

The fourth picture is looking out from the barn. Two of the little guys are playing on the bales in the foreground.

In the last one you can see the bales dotting the field.
Posted by Marci at 7:55 PM

Looks like you had a good hay crop.
How nice of your fellowship to come and help. How many cuttings do you get a year ?
The young girls all look so sweet.
I am sure you are happy to have the haying done

I'm glad you made hay while the sun shined!!!! And it was good that you had plenty of help....what wonderful people!

My girls are always fascinated by hay bales - they really enjoyed seeing pictures of your hay being put up!

What beautiful countryside you have! I used to play on haybales like that when I was little. I can still smell the sweetness of it!
Kelli