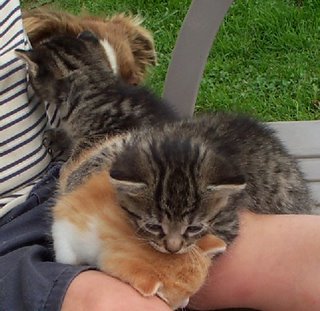 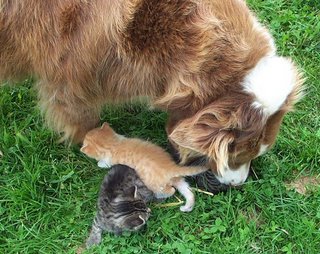 Anyone of you, who really KNOWS me, knows that I DON’T like cats. In fact I was raised to basically hate them. I would never hurt one, but I don’t like them rubbing up against my legs, or clawing at my skirts, or walking slowly right in the pathway that I want to take. When we moved to the country, we had mice in the barns and even some in the house. So, we got a BARN cat. I named our first cat after my friend Ginny. She laughed so hard and long when she heard I got a cat. She said even her cats were guffawing. Well, Ginny learned quickly that I was not the person to come to for lovin’. My son (I have never figured this one out) was the one that took care of that department.
We were told that momma cats were the best mousers. So, we got a female. No one told me how many cats your farm could end up with starting with one female cat. Actually, we have had no problems getting rid of kittens or even cats. We always hear of someone wanting a cat.

We have always handled the kittens and let all of our friends and neighbor children handle them so that they are tame. Someone told my cats of this and the last few litters have been hidden from us. When we finally get to see the kittens they are big enough to hiss and spit at you like little tigers. No one wants a wildcat. Some have just disappeared, others we have actually caught and tried to tame. Needless to say there are more cats running around here right now than we like. So, we are going to either keep a couple of male kittens and get rid of everyone else, or keep one or two mommas and get them fixed (or is that broke?). We heard that there is a place in town that does it for pretty cheap.

We had friends that wanted to borrow our stock trailer to take some steers to the butcher. I checked in the trailer to make sure it was clean. I found the three kittens in the above picture in a hollowed out place in the straw on the back of the trailer. So, I decided it was time to tame some kittens. In the one picture they are in the lap of one of my little friends from next door. In the other picture, our dog, Star is cleaning them up and generally watching over their well being while they are in the front yard. The neighbor’s oldest daughter and a couple of friends went on a kitten hunt. They came up with 9 out of 11. We now have them in a crate and they are being handled. We give them milk and cat food and they seem to be doing well. I already have one person interested in a couple of them.
Posted by Marci at 10:44 PM

9 kitties! Wow! I'm glad you hear they are getting some "lovies." You dog is so sweet to play with them!
Kelli