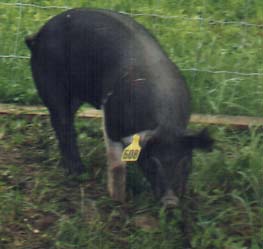 Wow! That is a big pig! I love hearing your stories about farm life. I have always wanted to live on one so this is the next best thing!
Kelli

It is 3A.M. & I am suprised my husband has not gotten up to see what in the world I am laughing at so early in the morning!! That is the funniest story!! I have had quite a few experiences with pigs myself but that is a one of a kind! Well the fella lived up to his name! Pigs really are smart animals. We raised a wild pig (we call wild ones Piney Wood Rooters here) from just a few days old. He ended up acting more like our dog. He greeted you when you came home, wanted to be scratched all the time, and slept with & followed my dog every where! TOO FUNNY..thanks for the story!!!LOL!!LOL!!!

Marci, the story of Houdini was a hoot!