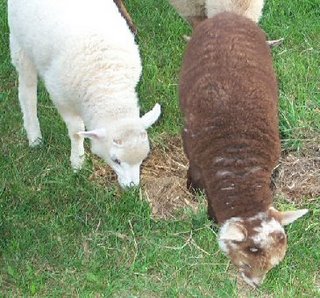 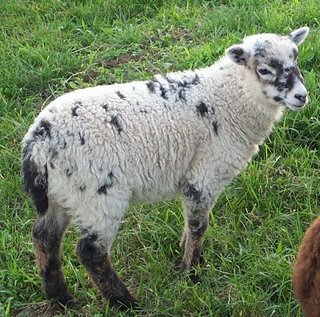 We have a ewe named Faith. She has been getting out of the fence every day, several times a day for the last week and a half. So, yesterday, we caught her and her ram lamb, Rodney and put them in solitary confinement. Today, we moved them to a nicer cell, oh, I mean pen that was a bit airier for this hot weather. We got Faith first and my husband carted her over to her new quarters. Well, her young son did not like being left behind. I was out in the garden and he was bleating like crazy. Next thing you know, he had jumped the gate and was out. Now, when they get out, they go in the garden. They eat the taller grass around the edge, but have been know to take off at a run through the entire garden. Also, my husband found nibble marks on his corn today. We herded Rodney back into the pen, and caught him again and carried him over to be with his Momma. We were inside and heard something... what is that bleating in my ears? Another ram lamb has found a way to get out. I went out and he jumped through a hole in the fence that Faith had created in her escapades. Safe at last. I came back in to get the milking supplies and the calf's bottle when Michael comes in and tells me that the ram lamb is out again. This escapee is called Cookies-N-Cream because of his coloring. The pictures above are of ram triplets that my ewe, Sunshine had. We named them Chocolate, Vanilla and Cookies-N-Cream. I am sure you can tell which name goes with which lamb. We fixed the holes, and the fence was low in one spot, so we fixed that. Now, I hope and pray that all the sheep and lambs stay in.
Posted by Marci at 9:30 PM

Oh what fun ! Escapee sheep and goats are just enough to make you question having them : )

It's been tiresome enough shooing chickens out of my garden for the gazillionth time! Bet with all that exercise chasing sheep, you sleep well enough at night....wait, I feel a pun coming on....that you don't have to count them! ;^D

Wow, you have some rambuctious critters are your farm! I hope the newly fixed fence keeps them out of your garden!
Kelli

I feel for you, Marci! We have 3 old Columbians, and they are becoming a problem around here. The boys let them out (along with the goats) for a period of time every day, and now even with the enticement of grain they refuse to go back into their pen! It would be okay, but we too don't want them discovering our gardens and getting into them. Some days are downright exciting around here!