Yesterday, I went to see my Sister-In-Law. I have not been over to her house in a long time. It was good to spend some time with her. I wanted to share some of my day with you. I had to go into town before I went to her house, because I had to make a deposit. I ended up going in a big triangle because the town my bank is in is north and west of me. My brother and his family live almost due west of me. I was coming out of town and trying to think of the fastest way to get to their house. I called Michael at work and asked him what he thought was the fastest way. I could only think of one way and that was going due south for a ways and then cutting over west. I wondered if there was another way that might have been shorter. He said I was probably going to have to just go the due south way. I asked about another little back way down closer to where I turn west and asked if he thought it might cut the corner a bit. He said that he did not think so, that I should stick to the main roads. One of the things that God has been teaching me over many years is to trust God to work through my husband. I told Michael I would go the way he said. As I got down nearer where the little possible short cut was, I thought about going ahead and trying it. Michael would not be mad, and it was not like he really TOLD me I HAD to go that way. God prompted me to listen to my husband. So, I just settled in to sticking to the main roads. On my way home, as I came by the road that I would come out on if I had taken that other way, there was a sign saying road closed ahead. There was a bridge out. If I had gone ahead and decided to not listen to that prompting, I would have had to back track and it would have been even longer. It was just a little thing, but it shows how God is looking out for us, if we will listen to His little quiet voice.

My brother's family has an English Mastiff named Johnny. He is more pony sized than dog sized with a HUGE head. I pulled into the driveway and he came out to meet me. I put the window down and held out my hand to him. He sniffed it and let me pet his head. I went ahead and finished going up the driveway and parked the car. I got out and he was really friendly with me. Debbie, my Sister-In-Law came out to greet me and we all 3 (her, me and Johnny) went in the house. 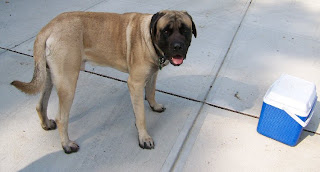 We had coffee and talked for a while and then she permed my hair. Johnny stayed right by us the whole time. He would come say hi to me and then lay down and sleep some. She did a spiral perm with these long perm rods. I am sure I looked like an alien with them in. Then after she put the solution on, she put a garbage bag over the rods and then a towel over that. Johnny was fine with me still. He would come say hi and then walk away, or lay down by our feet. We went outside and took a tour of her gardens while we were waiting on the perm to take. Johnny went right along with us. 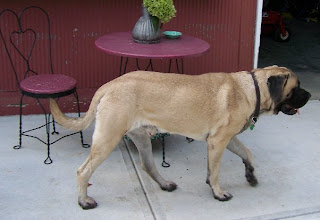 We went back in and she finished the perm. She tried out a possible hair style for me to wear to the wedding by pulling back the sides of my hair and putting them up on top with a clip. I didn't like it, but she told me that it was just because I wasn't used to it. She told me to go into the bathroom and use that mirror to look at it. Johnny was sleeping at that point. I went in and looked at it and walked back out. He woke up and looked at me. He growled and barked. She told him to hush, but she had just dialed the phone and the other party answered, so she couldn't keep after him. I started across the room toward where she was. He came and got between us and sat down. He was not being aggressive or barking or growling, just keeping me from getting to her. I tried to go around him and he just moved and got in front of me again. It was so funny. I guess he either didn't like my hairdo or he thought I was someone else. He eventually made back up to me and I was allowed near Debbie. I think she has a good watch dog there.

Well, I have some George news. I took one of my Monarch Butterfly Georges to Debbie. She was glad to get him and went over and got some fresh milkweed for him to eat. My other Monarch George is now in a chrysalis going through that miracle metamorphosis. Weird George (or as the WN woman calls him Frankengeorge) is not in the house any longer. That caterpillar could eat. I would fill his jar with leaves before going to bed and they were gone in the morning. He was really creepy looking. I wondered what sort of cocoon he would spin, so I did some research on him and learned that they burrow under ground for their metamorphosis. So, last night we said good bye to the ugly guy and put him out near the leaves that he loved to munch. So that leaves Fennel George. He too is in a chrysalis. It is harder to get a picture of his chrysalis because he did it on the side of the jar and not the top. Here are 2 really bad pictures of it. I don't know how long it takes for him to come out, but I am excited to see what he becomes. 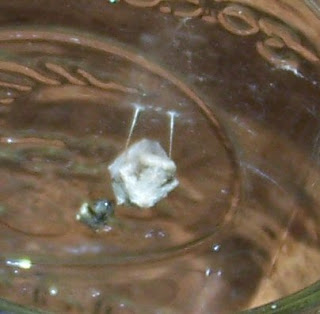 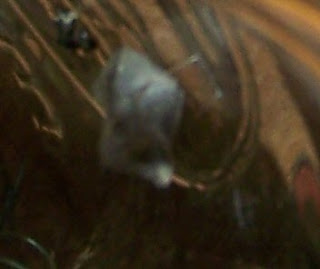 I hope you all have a wonderful weekend. What do you have planned?
Posted by Marci at 1:33 PM

Sounds like you had a good day yesterday. :D

Hi Marci!
The Lord is good to remind us that our husbands are there to guide us. I still forget this a lot of the time when my need to be right pops up.
Do you like your perm?
I hope you have a great weekend!
Kim

Marci,
Mastiffs are so much fun if you overlook the hair, slobber, and smell!! He was probably confused by the new hair.
grace and peace,
julie

I'm glad you had a nice visit and got your perm. We will be going apple picking hopefully

I had a good laugh about the dog! I met one of those dogs in England and he was HUGE but ever so gentle and kind. I'm enjoying your butterfly progress reports.

Hi Marci,
I bet your hair looks great!
We are going to an apple orchard today.