The Lord is Our Rock

We were gone this weekend. We traveled to Indiana to attend my Uncle's funeral. It would be really easy for life to feel very heavy right now. If I try to handle things on my own, that is exactly how I feel. I am trying very hard to stay in my Father's lap of love (Psalm 131) and rest. We were going to swing by on the way home and see my Aunt who is in the hospital. It was not a good time for visitors, so we will go another time. Please continue to pray for my Aunt Darolyn.

There were several interesting sites we saw on our trip. The funeral was held in Rockport, Indiana which is down on the Indiana/Kentucky border. Our hotel was actually in Owensboro, KY. The cemetery was in Santa Claus, IN. I took this picture of one of the signs on the highway to show you that I am telling the truth. 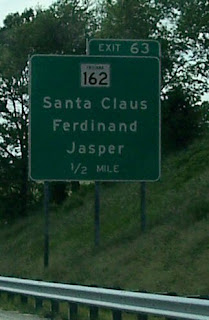 Santa Claus, IN has an amusement park called Holiday World and there is Rudolph Lake and lots of other things named around the theme.

I tried to catch this next picture on the way down, but missed it. I was determined on the way home to catch it. We drove right along the river near Louisville, KY. There is a 12 story high baseball bat in front of the Louisville Slugger bat factory. We have actually toured the factory in the past. It is really neat. I could only catch the upper part of the handle, but you can see it in the 2 pictures below. 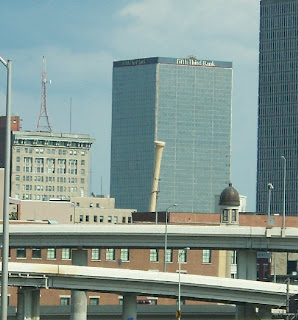 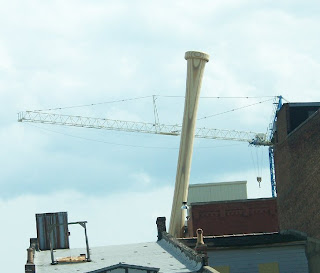 Here is my garden. We totally covered it in mulch. Very little is planted yet, but we are slowly working on it. 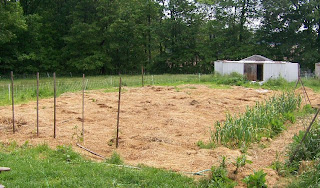 I thank each of you who left a comment or wrote to me about my last post. There is still a hard time to walk through, but God is faithful and I still praise His holy name. I keep thinking of Job. He lost so much, yet he praised the Lord. In one day he lost everything but his wife and a few servants who escaped to come and tell him of his losses. What was his response...

Then Job arose, and rent his mantle, and shaved his head, and fell down upon the ground, and worshipped, And said, Naked came I out of my mother's womb, and naked shall I return thither: the LORD gave, and the LORD hath taken away; blessed be the name of the LORD. In all this Job sinned not, nor charged God foolishly. Job 1:20-22

Can you imagine? He fell down and worshipped the Lord and blessed His name. What I am walking through is nothing like this. It is just something that is not understood by me and it hurts. I want to fall down and worship Him. I want to bless His name. I want to have the Lord say, in all this, she sinned not nor charged God foolishly. It is a choice that has to be made. It makes me think of the "Facing the Giants" movie. Will I praise Him if I win or if I lose? If I do not understand here on earth, will I still love Him and serve Him and bless His name? There have been so many times in my life where God showed Himself strong on my behalf, where He made Himself known to me, where I KNEW I was His and that He loved me. I can not doubt Him now. He is alive and there is a very real relationship you can have with Him. It is not about going to church, or praying before meals, or even reading your Bible everyday. It is about Him and how He wants to be a part of your life. He wants you to make every day choices based on His plan. We are to pour ourselves out in Him. We are still to walk that way even in the hard times. He is still there. He walks with you and often times carries you over the rough spots. I want to run to Him not from Him. In Him is my only rest. I have mentioned this before on my blog, but I found a plaque with a neat saying on it several years back. My Dad had been hit head on by a drunk driver (who was killed in the accident). He was so bruised and broken and there was a long haul of recovery in front of him. In fact to this day some 24 years later, he still has some physical issues from that accident. Anyway, I gave him the plaque. I have never seen this saying since then, but it said something along these lines....
Sometimes God calms the storm. Other times He holds the child and lets the storm rage.

May He be our shelter in the times of storms.
Posted by Marci at 11:46 AM

Thankyou for writing this, Marci. I'm praying for you.

Marci,
I just had to tell you yet another connection between us...

I grew up 30 minutes outside of Owensboro in a little town called Beaver Dam. My brother still lives in Owensboro or outside of it in a itty bitty town called Philpot. (Don't laugh...I'm not joking)! Michael and I spent our one night of a honeymoon in Owensboro at the Executive Inn right there on the Ohio River. And if that isn't enough...my grandmother lived in Booneville Indiana...just outside of Rockport. I spent several weeks each summer there enjoying the farm life. Every summer she took me to Santa Clause Land (now known as Holiday World). My children will be going there in a few weeks with their grandmother!! It is a very small world. I also wanted to let you know that I was sorry to hear about the death of your uncle as well as the sickness of your aunt.

I'm glad to know that I'm not in the boat on troubled waters all by myself. It seems everyone is enduring pain these days. Like you...I remeber that GOD is faithful.

I know about Santa Claus, IN too...but I am originally from IN. :D

This is easy to say, and hard to do isn't it?
I appreciate your post, and your strong desire to remain in the palm of our Father's hand.
May He give you strength, and peace as He holds you there!