The chickens were truly free range. They came out under the gate and wandered all over the place. I did not want them in the garden or on my porches. I would see a bunch of them out and I would call out the window, “Get in your yard chickens!!” Star would come running from where ever she was to chase them. They learned that when I hollered, Star came running. People thought we had trained them, because whenever you told them to get in their yard, they all made a bee line for the gate and raced each other to get under it. 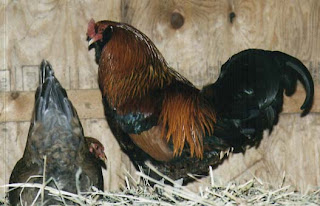 One of our roosters, Fireball (he was one we brought from ) made a noise whenever anything flew over head or was thrown over his head. He had started it while we still lived in . It sounded like he was saying WOWwwww! Once one of the neighbor’s banty hens flew long way, he just kept saying wowww wowww wowww!!! We were cracking up. We told people that he did this and they did not believe us. We would throw something over his head and sure enough, he would say WOWwww!!. That is him in the picture above. They thought we had the smartest most well trained chickens. =)

One of the neighbors around the corner moved away. They left a peacock behind. I don’t know if they couldn’t catch it or what. On the end of our barn that faced away from the road, there was a big plate glass window. That end of the barn had been a workshop for the Amish that lived there. There is a reason that they say someone is as proud as a peacock. He had the biggest ego of any critter I ever saw. He would fan his tail out and admire himself in that window for over an hour. He would also go up in front of the chicken coop and fan his tail out as if to say, “Poor birds… you are no where as beautiful as I am!” Peacocks are LOUD and MESSY!! We did not want him hanging around. I could talk to him. He made one noise that sounded like someone hollering, “Play Ball”. I would go out and holler that and wherever he was, he would answer me. He made another noise I imitated pretty well. Joshua caught him one day in our feed in the barn. He brought him up on the porch so that we could get a good look at him. His feathers were beautiful. What an awesome Creator we serve. He went out of the way to create beauty for us. 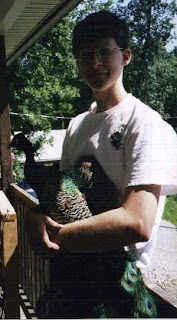 Star knew that we were fussing at the peacock when ever he was in our pasture or barn. She learned the word, “peacock”. Star hung out under the back porch in the shade whenever it was really warm out. We would open the door and say peacock and she immediately flew off looking for the peacock. The peacock would see her coming and take off. It did not immediately take flight. It had to run a little ways before it got air born. Star would chase it until it hit the road and then she would stop. One time we allowed her to cross the road to the field and continue the chase. She caught his tail feathers, but he broke free. We did have one tail feather for a souvenir though. The peacock also got smart to us opening the back door when he was in the pasture. He would take off as soon as he heard the door. We started opening the door very slowly and only opening it a crack. We would then just whisper, “peacock” and off Star would go. The ladies who lived next door adopted him and even put a mirror up for him in their barn.

One day, Joshua and I were out doing some things in the yard. Our pasture went up behind the barn and was fenced. Our garden was also fenced and there was a narrow area between the two. It was probably around 30 feet. There were some trees in that area as well. We were standing in that area working on a project. We heard this sound like someone screaming. We looked around and could not see anyone or anything out of the ordinary. It did not really sound human, but we weren’t sure what it was. It happened again and was louder and more sustained. All of a sudden a miniature stallion came running and screaming up our driveway and was coming right at us. It was very scary for a minute because you had no idea what it was going to do. We both jumped back and it went running by and went up behind the pasture and into some tall weeds. Joshua ran to get his lasso and I went to look down the road to see if someone or something was chasing it. Joshua chased it all over our property and the neighbor’s property. It would start to walk and when he got close it would take off again. He tried for quite a while to get close enough to lasso it. I grabbed a bucket and put some feed in it. I went down the road to see if he could bribe it with the grain. It saw the bucket and came walking toward me. I turned around and started walking back toward our house. It followed a long like a puppy. I hollered back to Joshua that I was going to walk into a stall and that he needed to be ready to close it behind us. I went right into the barn and into a stall. I put the bucket down and he went right over and started eating. I got out of the stall and Joshua closed the door. We knew everyone on our street up until the main busy highway. Very few people lived out there. None of them had a miniature horse. We called some people who had lived in the area for awhile and none of them knew who he belonged to. We called the police and they had us call the local radio station to see if they would announce it. We finally got a call from a lady who said that Blackie belonged to her and she would come and get him. We told her where we lived. When she got there, she was just a little slip of a woman. She probably weighed 80 pounds soaking wet. She looked to be about 8 or 9 months pregnant. Another lady had brought her in a car. I was trying to figure out how they were going to get him home. It ended up, that the pregnant lady sat in the open trunk and held his lead and the other lady drove really slow. I asked where they lived. It was about 2 miles away and you had to cross a fairly busy state route. The next day we had a visitor… guess who? Yup, Blackie had come back to visit. This time we waited for Michael to come home and loaded him up in our trailer and took him home. She asked if we wanted him. They were trying to get rid of him. We had no need for a miniature stallion, so we declined. That was the last we saw of Blackie. 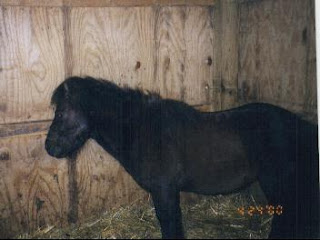 LOL! snort LOL! Stop! I can't take anymore. heehee snort I keep getting pictures in my mind of all these adventures...

Star is a true wonder dog. And I still think you should make a book out of this wonderful story of your life.