We are only doing one batch of broilers this year. The chicks came today. Here is the brooder all set up for them. I still had to fill the waterer and put it in. The Wonderful Neighbors picked them up at the post office for me. They had a few replacement layers in with my order. I thought it was very nice of them to pick them up. 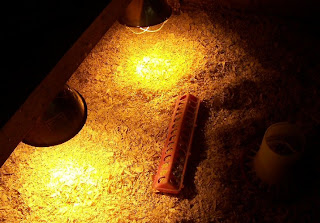 The Wonderful Neighbors stayed to help put the chicks in the brooder. Or should I say to put them in for me. They dipped each little beak in the water as they put them in. Star is always so excited when new chicks arrive. We were trying to catch her giving kisses to the chickies. 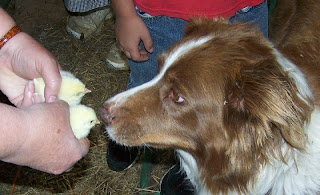 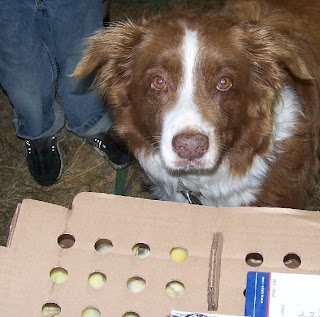 The hatchery believes in segregation. One half of the smaller top box had their Black Sex Link chicks. The other half was the larger yellow broiler chicks. 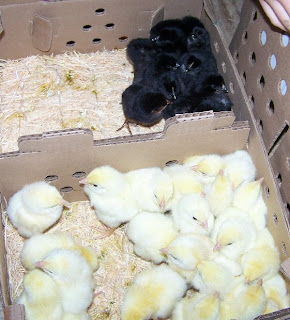 The bottom box was full of yellow fluffiness!! 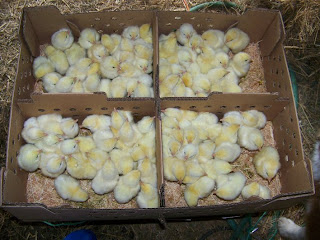 I wonder what that chick is whispering in his ear? The two little guys would hand the baby chicks to their big sister. She would then dip the beak and put them in the brooder. 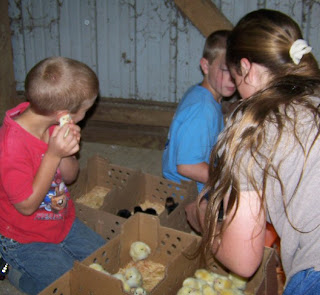 They took their job seriously. 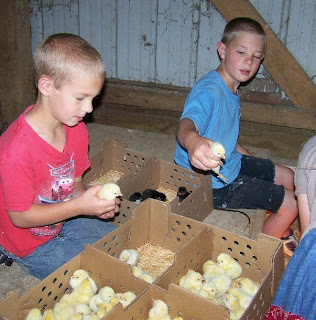 Here are 2 of the wee chickies checking out their new quarters. 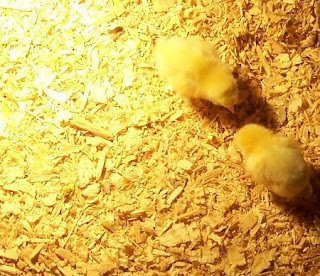 Look another chick is telling him secrets. =) He must understand chickenese. 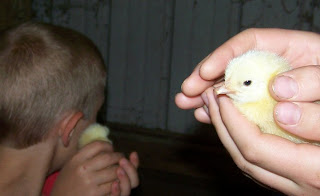 Here is the brooder full of fluff balls. This is the only time in their life that these chickens are cute. 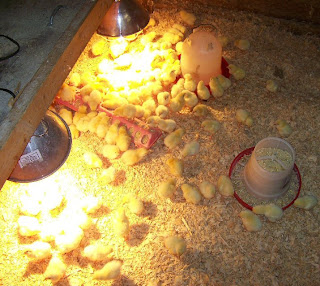 Email ThisBlogThis!Share to TwitterShare to FacebookShare to Pinterest
Labels: Chickens

Oh, I can't wait until we get our new chicks on the 23rd! So cute! Yes, I think the wonderful neighbor children probably know chickenese. :-D

They are adorable--the kids and the chicks! :0)

Can I ask a question that only a city girl probably ask!? LOL

Sharri, they dip their beaks in the water. They are usually thirsty when they get here, plus it shows them where the water is. Many people do not do this, so it is not mandatory.

We're looking for some chickens. We want adult laying hens. The problem is "what does one google to find a chicken seller?" I type chicken and well you can imagine what I get. Everything from KFC to the hospital research lab. How does one find chickens?

Miss Kelly & Miss Andrea, call a feed store in your area and ask if they know of anyone selling pullets ready to lay or layers. Be careful if you buy adults that are already laying. Make sure you ask how old they are. If they are 2 or more, I would not buy them. Look in the local paper for pullets under agriculture. I don't think Ohio has one, but Florida had a paper put out by their Ag dept. that people advertised animals for sale in.

Oh what precious pictures - of both children and chicks! I know you have answered this question before, but what kind of dog is Star? I would love to get our Mason a sweet dog that would bond with him. Have a wonderful, blessed Thursday!

Star is an Australian Shepherd.

Hi Marci,
Those little babys are so precious!
Thanks for sharing those pics and details with us!

How precious! What a neat experience for the children too. I showed my daughter and she was fascinated. Are the black sex link ones, ones that are guaranteed to be female or ? I wasn't sure what that meant. I have never seen black chicks before...brown and yellow and mottled but never black. They're all cute.

There is a newspaper that we used to get called Farm and Dairy which is sent out from Salem, Ohio though which they have a classifieds section, you can look at it online as well at www.farmanddairy.com