Tomorrow is Resurrection Day. Think back to that time when Jesus was still in the grave. So many people were confused. They thought he was going to lead them into battle against the Romans and take back the kingdom. They had followed Him all over the region. They had seen miracles happen. People blind from birth could now see. The lame boy that used to beg by the gate, was now hopping and jumping and skipping along with the other children. People no longer having to stay outside the gates and yell "Unclean" when anyone came near them because they had leprosy. Now, the dead, white, half eaten flesh was new and fresh. Just a week ago, He had been hailed by the people as a king. They laid down their cloaks in front of the donkey and waved palm branches and sang Hosanna. Many of those same people less than a week later were yelling "Crucify Him" because a mob mentality had taken over. No one had those penetrating eyes like He did. They looked right down into your heart of hearts and saw you for what you really were, but loved you anyway. He was strong having been a carpenter. Yet, He was gentle. It all happened so fast. He was put on trial and then sent to be crucified. As He hung up there on the cross dying one of the most horrific deaths known to mankind, He asked that God forgive those who were doing that to Him. He was innocent of any sin. He took my sin and your sin upon Himself. Sin so ugly that the Father could not even look at Him. How that must have hurt. They kept waiting for Him to jump down and show them who He was. He was Messiah, it couldn't end like this. He called out loudly, and died. They were in total confusion. The sky darkened and a storm of all storms lashed those on the hill. There were earthquakes and graves came open. What was going on? They were not sure what to think. They felt sad, betrayed, forgotten... I often wonder how many truly had the hope and belief that He would rise again. What would my thoughts have been on this day back then. He was in the grave and it was well guarded by Romans. Because of me, He died that horrible death. He took my sins upon Him and paid the price for me. Waiting.... everyone was waiting... what if anything was going to happen? We shall wait until the morning...

There are signs of spring around here even with all the snow. My dear sweet husband brought me in the first crocus bud. 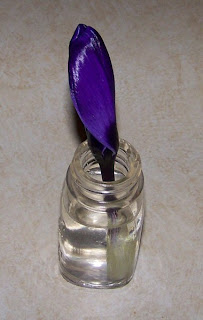 Here are some daffodils in the front of the house. I need to clean out these flower beds. They were not dealt with last year. 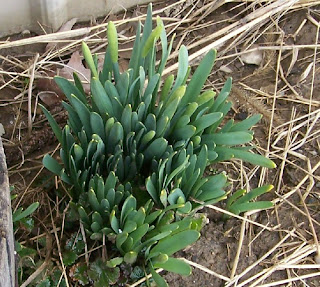 Here are some more daffodils, lilies and iris plants coming up. 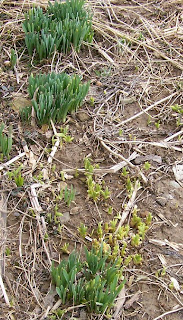 Here are the cows enjoying the day. Sorry about the clothesline across the picture.

Oh how I love the change of seasons. Happy Easter to you and yours Marcie.

Wow. Your bulbs are much farther along than mine. :-D Of course, we are MUCH farther north... ;-)