On August 3rd, I introduced you to George the Caterpillar. On the 4th, he attached himself to the top of the jar and hung in a "J". I was so hoping to see him make his Chrysallis, but he was very shy and did it while I was sleeping. Well, he is getting ready to show you one of the Miracles that God allows us to see. His Chrysallis was all green. It has these beautiful golden touches that looks like real gold. You can see them a bit in the pictures below. There is a golden band around one side near the top and then some flecks of gold below. Well, the chrysallis is turning clear. If you click on these pictures (especially the second one) you will be able to see the orange and black of his wings. It should not be long now until he emerges not as George the Caterpillar, but George the Monarch Butterfly. George the Second is still in his green chrysallis. I just glanced at his jar today and saw another caterpillar. I thought George had somehow fallen out of his chrysallis, but he is still hanging securely from the top. There is now George the Third. =) 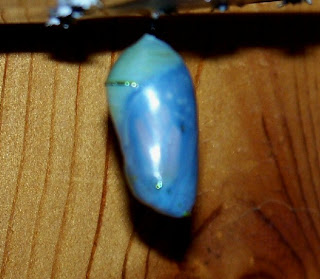 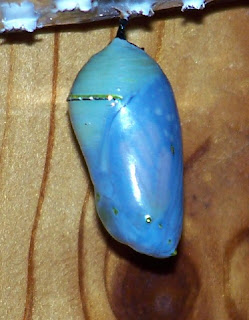 Email ThisBlogThis!Share to TwitterShare to FacebookShare to Pinterest
Labels: Nature, Our World

That is so neat Marci! I wish I could have a George to watch someday. Can't wait to see what he looks like once he emerges. :D

If you are out this way sometime I am sure we could probably find you one. Stop on by.

How cool is that, I know what part of my homeschool science lesson will be today. Butterflies featuring your blog. Thanks.

Today was our first day back in homeschool with Crissy. We picked back up in Science where we had left off last year. Our lesson today - invertebrates! I pulled up all your pictures of George and Crissy has pronounced that they are so "cool"! She has asked me to be sure to show her whenever you post about George next time. Thanks so much for sharing! It is a great lesson for all of us.