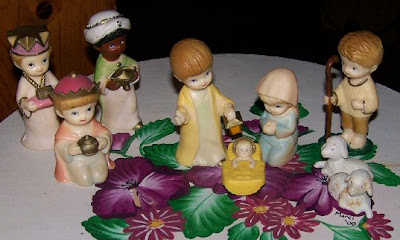 I bought this plastic nativity set when Joshua was little. He is now 27 years old.   I wanted him to be able to play with one and set it up like he wanted. It survived him. It has survived many children over the years.   One of the lambs disappeared one year and we found it about 5 years later in the pocket of a snowsuit that a friend's child had borrowed. The Shepherd's staff got broken another time, but it was glued back on and has held fast.   Now move forward to this year. Skye never touches anything on any of the tables. I had set the nativity up on the coffee table so little ones could reach it. She took one of the lambs while I was watching and I told her NO very sternly and put it back. She did not touch it again for days. Today, she took the other lamb when I was not around and chewed its head off. The head is all chewed up and in 2 pieces.   Goofy dog.
Posted by Marci at 8:55 PM

Email ThisBlogThis!Share to TwitterShare to FacebookShare to Pinterest
Labels: Dog

I know it's not funny, but I couldn't help chuckling when I read this. Who knows what goes through a dog's head? LOL!