We were starting to swim in summer squash. We had zucchini and yellow squash coming from our own garden. We were getting zucchini and patty pan squash from our CSA basket. Then this week we got a HUGE squash in our CSA basket. I am always in a quandary on how to preserve squash. We don't really make zucchini bread, so grating it up and freezing in portions was not a good option for us. I had heard contradicting opinions on freezing it. Some said it was still OK to use, others said it was mushy and watery. I had a friend can some one time. She said it came out mushy. I did not want to put a lot of time and effort into preserving it and then not using it. We like to saute it, or put it in salads or in stir fries.

This book tells many of the old ways that people have preserved their food. We used a technique from this book to preserve our squash.

I cut the squash up in different ways. I did some in slices. We have friends that put the slices of squash on their sandwiches. I thought this would be good to try. I also did some in strips to put in stir fry and some in chunks to put in salads. You could do them any way you like. Then, I boiled some apple cider vinegar. I was going to do this in smaller batches instead of one big batch, so I just guessed at the amount of vinegar in my pan. You bring the vinegar to a boil and then turn the heat off. Put your cut up squash in the vinegar and let it sit for 5 minutes. Take the squash out of the vinegar and put it in jars. At this point, you can do several different things. The recipe in the book calls for mint leaves. That did not sound good to me. I did several different things. I used salt in some of the jars, basil leaves in some of the jars and garlic cloves in some of the jars. Then fill the jar with extra virgin olive oil and make sure all the food is under the level of the oil. Put the lid on and stick on the shelf in your pantry. You might think that it will use way too much olive oil. I did 10 quarts of squash and used about 3 liters of the oil. I was blessed and had found several 3 liter tins at the bent and dent for a good price.

Here is one of the HUGE zucchinis we got from our CSA basket. That is a quart jar sitting there to show you the size. It is a Costata Romanesco Zucchini. They are fast growing and get huge. Even though it is big, it is still tender and very meaty inside. 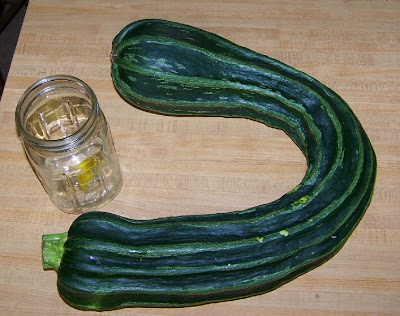 I cut it in 2 to show you the inside. I was amazed at how nice it was. 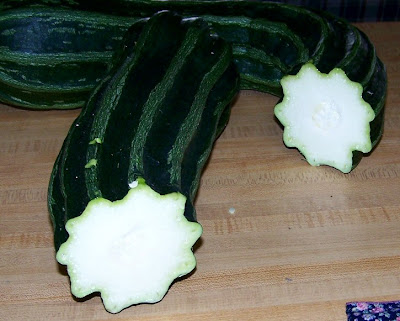 Here are some of my jars of squash when I was done. 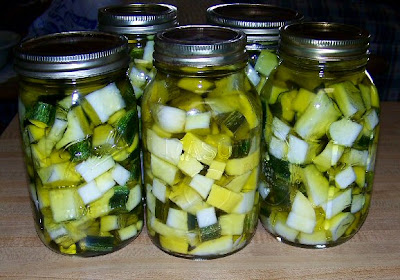 One of the neat things about doing squash this way is that you could use any sort of jar that had a good lid. You would not have to use your canning jars for this.
Posted by Marci at 6:19 AM