I love sunflowers and try to plant them in several places. The birds also help me plant some and this year I have several growing under my bird feeder. :) This is the tallest though. It has to be between 10 and 12 feet tall. 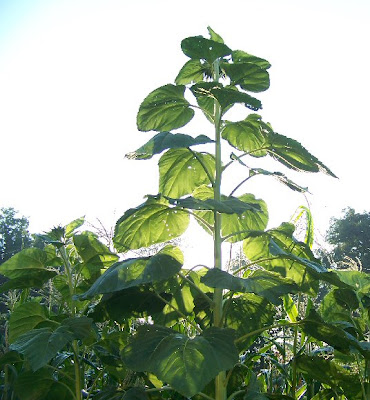 Skye has found she likes romping in the garden. She gets in very easily by pushing on the gate. She has more problems getting out. I call her my little garden rebel. 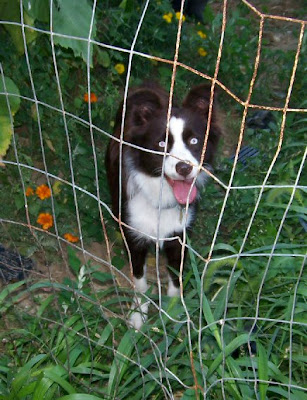 I have been doing some canning. Nothing major yet. I canned some more green beans. I have also been making cheese at least once a week. That is a round of Colby waiting to be waxed. 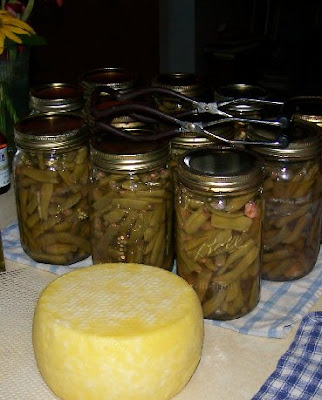 We had 10 chickens cut up. We had someone else do them and they did them very differently than we do. We normally, end up with 2 breasts, 2 leg quarters, and the rest of the carcass. We do the breasts as boneless and then there are little strips under the breast that we do as chicken tenders. They cut the breast so that it was one big piece with both breasts. It makes it a bit harder to grill, but we will work with it. They also made a separate piece of the neck and the back. I threw the necks, backs and wings into a big pot that is either 3 or 4 gallons. I ended up having to fish some out and put it in another pot since it was so full. It started spitting all over the top of my stove. 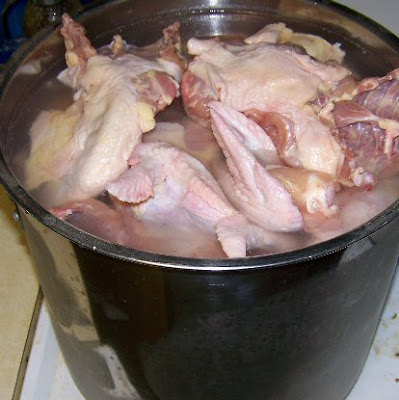 A friend picked me up last week and took me to a Knitpicks warehouse sale. They also had fabric pieces there. It was pretty interesting. We got there early and were told no one gets in before 1PM. We hit an outlet store in the area and then had lunch. We got back very shortly after 1PM and it was already a zoo. They had 3 rows of huge boxes (approx. 4' X 4' X 4') lined up on the floor that was overflowing with fabric pieces. Most of them were strips, but there were some larger pieces. They had some beautiful pieces. If you quilted or made small ornaments or something, it would have been a dream come true. They sold the material and the yarn by the pound. I did not need any material, but I did help my friend try and find some pieces. They had maybe 16 or so of those large boxes in another area that had yarn in them. The first people through the door had some really nice stashes. By the time we got there, the boxes were less than half full and the bands had come off a bunch of the yarn and there were big tangled messes. Picture hundreds of people all trying to dig through 16 boxes. It reminded me of something you would see on an "I Love Lucy" show. I will say though that I did not run into any rudeness or ugliness. Everyone was very sweet. In fact a couple of times when I needed to try and break a piece of yarn to take the skein different people offered me a pair of scissors. They also had a long row of boxes full of books up on a conveyor type belt. My friend is a knitter extraordinaire. She knew by sight a lot of the books and knew some really good ones. The hardbacks were $3 each and the soft covers were $1 each. I got a $30 book for $1. I did not get tons of stuff because I know how slowly I knit. :) I am also going to share some of my stash with another friend. It was a fun day out with a new friend and we got to know each other better. Here is what I came away with and believe me, I was one of the few who had this little of a stash (even though it looks like a lot to me). :) 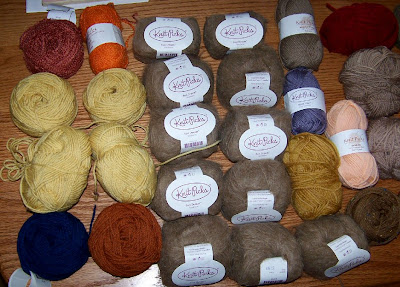 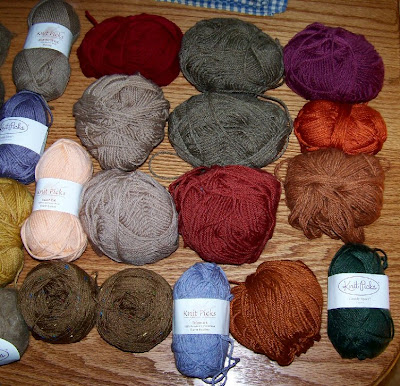 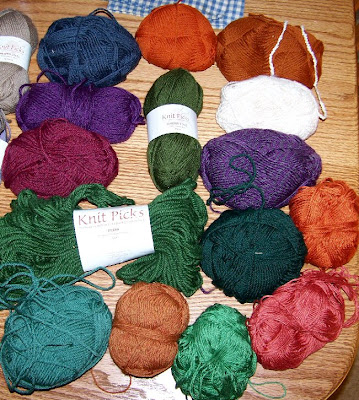 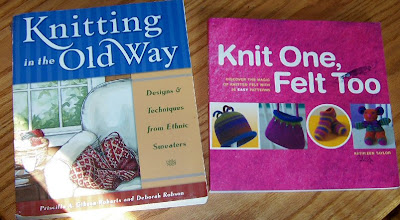 your shopping trip sounds fun..and it was nice to know people were nice and not rude as usually is the case..
~~Peace & Love~~
Blessings