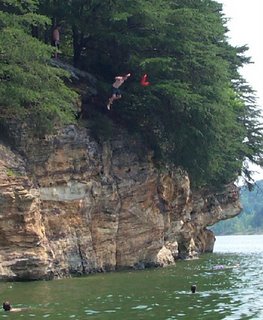 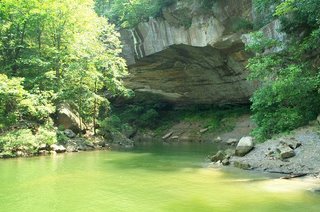 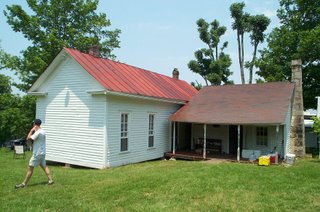 We had a family reunion in Kentucky this past weekend. The weather was clear, but it was very hot and humid. It was in the high 90's and very humid. However, it was on a big lake, so you could always jump into the water. Also, there was an old well in the front yard. It has the sweetest, best tasting, coldest water I have ever tasted. We have gone to this place since I was a little girl. The well was a popular place with the children. Some one big would bring up buckets of the water, hand over hand. Then they would pour them into other buckets and containers sitting around the well. The children and some of the adults would splash themselves or each other with the ice cold water. When you wash your hair in it, you are sure that your brain is frozen.

There were 2 pontoon boats and a speed boat there. We would all get in and go over to these cliffs where people could jump off. The first picture is my son jumping off the highest part of the cliff. There were different levels to jump from. I was amazed at how brave some of the smaller children were. The second picture is of one of our boats we were on.

The next picture is a rock overhang that my Grandpa and Dad used to take us in the boat. We would get in underneath the rock cliff and they would tell us how that rock falls every 100 years and they think this is the 99th year, 364th day, etc. It has still not fallen. =)

The last picture is of the old house that is there. It is over 100 years old. The part that has the darker roof is all made of hand hewn logs. That part has the living area and kitchen. The other part has 2 bedrooms and a bathroom. We used to always have to use the outhouse. My Grandpa put the bathroom in when I was probably around 12. He just used the smallest of the 3 bedrooms in that part of the house. The entire house used to have the red tin roof.

There was no hot water in the old house, so baths were in the lake or at the well. I cheated and went on Monday night to my Aunt and Uncle's house (which is behind the old house) and took a shower there. They live there all summer, so there house is totally modern.

It was good to see family and have a chance to talk about old times. It was sad that this was our first reunion without my Mom. I sure would have liked to sit and talk to her.
Posted by Marci at 5:47 PM

Marci, it sounds a little bit like Heaven to me. I LOVE places like that. It reminds me of my Grandmothers house. I'm glad you had a good time.

Thanks for sharing your time with us. What a beautiful place!

What a beautiful place for a vacation! The swimming hole is amazing and the house looks like a fun place to spend time with family! I'm sure you are making lots of wonderful memories there.
Kelli

Marci great pictures as always .. So glad you could go to KY..And for your mom she was looking down on you all and very happy in her own way... Big Hugs..love Brena

Hi Marci,
Looks like a wonderful place and one with many memories. Does anyone live in the home now ? Its just the perfect little homestead looking house.

I found your blog via your comment on Dry Creek Chronicles.

I remember you well from the golden years on CSRL. :-) Glad to see that y'all are doing well.

Pat, no one lives in the house. We are actually thinking of buying it, if they put it up for sale. It would need a lot of work to be liveable for winters.

Jeff, good to see you again. I still find some of us oldies around. Deanna is on another list with me, so I chat with her via email frequently. =)

Sounds like a wonderful time was had by all! I love the old home and the lake! What a special place!