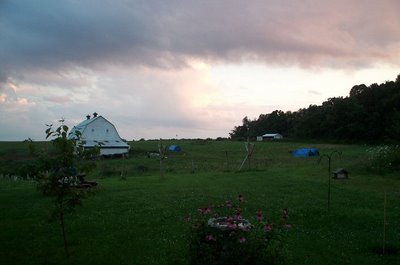 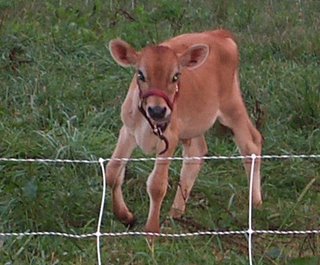 This was a full and busy weekend. Our son has been in Florida all week helping my Dad to get some things done around his house. Since Joshua is a jack of all trades, he asked his Papa to make a list of things that needed done and then he went down and made them right. I am thankful he has the heart to do that.

Last year, we did something we never do. When our 2 jersey cows calved, we left the calves on the Mommas. We were still getting milk, but then we got less and less and less. At that time we really were not set up to run 2 pastures of cows, so we had to keep the calves in there. This actually ended up being a blessing. When I got sick in August, my husband stayed at his parents house while I was in ICU and even a few days after that. They live 5 minutes from the hospital, instead of over an hour where we live. So, when people filled in and did our chores, they did not have to mess with milking cows. This past Friday evening, we took one of our milk cows, Molasses, to a neighbor's angus bull. They will keep her over there for a bit until she is bred and it won't matter as we are not milking her. Yesterday, we took our other cow to a friend that has milk cows. This cow, Buttercup, still had a little bit of milk. Her calf/heifer was still nursing some even though she turned a year in April. So, he is going to try and milk her with his cows to keep her in milk if she is. My dear, sweet, adorable husband has allowed me to try one last time for a honey colored jersey heifer calf. Buttercup is honey colored. Molasses is very dark brown although she is full jersey. I really like the lighter honey color. In fact when Molasses was born, I named her Honey. Then she turned dark, so I changed it to Molasses. =) Well, since we took Buttercup away, Sucanat (her daughter) has not quit bellowing. SHE WANTS HER MOMMA!!! Blackstrap (Molasses's daughter) has hollered a few times, but Suki is TRUMPETING loudly. Our poor neighbors. She did it most of the night as well. She has been a bit quieter today, unless she sees a human and then she starts again. She got out of the fence twice. She was herded back in both times by my husband, our dog Star and the neighbor and 2 of his children. My husband went out about 5AM to put her back in by himself. We are all tired today. =)

The above pictures are of the sky last night. It was not raining, but the pink and salmon colors were just beautiful. The last one is of Sir Loin of Beef. He is growing up.
Posted by Marci at 12:19 PM

Your pictures are BEAUTIFUL and I LOVE your cow's name!!!

Your blog is really interesting!!

Hi Marci,
I just wanted to let you know that I have started to visit yours and Clara's blog regularly. I used to be on Homestead Heaven with you gals and missed you all. So glad to see you are sharing your experiences and I am loving the pictures.
Teresa in KY

loved the photos and reading whats going on in your part of the world!

I enjoy reading about other people's family cow quandries. I've my own cow/calf situation going on here.

Do I understand you correctly that you're breeding your jersey to an angus? I have that opportunity, but have been a little afraid to try it.

Poor baby...I fall so much in love with all my animals! They can just break your heart!!