We took a trip on Saturday and went and picked up our milk cow. I had prayed that God would pick the right cow for us. He picked Buttercup and we could not have done any better. We were so thankful to Joshua for allowing us to borrow his truck. We left at just after 5AM. We had gone less than 50 miles and we had a flat on the trailer. Michael was a bit worried about that tire, so we had actually pulled over to check and sure enough it was flat. We have 4 tires on the trailer. This was the last original tire so it was 12 years old. We had a spare.

He had brought along a log and a flat thick piece of wood in case we needed to change a tire. He put the flat thick piece up on the log and the other end on the ground by the good tire on that side. He backed the good tire up on the wood instead of trying to use a jack. It was not high enough. We did not have a jack and we saw nothing else around us. It was lightening all around us, although the rain had not hit yet. A couple of the light flashes and thunder booms were simultaneous. There was one small tree with some weeds around the base. I looked in the weeds and found a big thick piece of concrete. He used that under the wood and it worked. We changed the tire and were on our way within 20 minutes.

We tried to find someplace to get a used tire put on the rim of that bad tire, but were unable to. We made it to all the way to the farm in good time. We walked down by the cows. Lilly, the original cow we were supposed to get was MUCH whiter than in her picture. I would have had to call her Buttermilk. The man told us he had some bad news. Lilly had started with mastitis in one quarter that morning. He gave us the option of going ahead and taking her and paying for her later after deducting any expenses we had or refunding our money and paying for our gas or taking this other cow. He pointed out the other cow and she was just what I was looking for. She has horns, but that does not bother us.

I was really excited about her and ready to say we would take her and then he said that his daughter did not want to sell her. Well, I was not going to take some girls cow from her. Michael knew I wanted her, but we decided to go ahead and take Lilly. I said we could clear up the mastitis in no time and we did not want to take his daughter's cow. He said he was sorry he had said anything and that she was not the daughter that milked. We still were leaning toward Lilly, because we would feel bad taking his daughter's favorite cow. He walked away with some of his children and let us talk. Before we could tell him that we would take Lilly, he came back over and asked us to please take the other cow (her name was Martha). He said he would feel better and he would not have to worry if we were unable to clear up the mastitis. It could be a done deal right here and now. I told him he had to talk to Michael. I had asked the Lord to work through my husband. He and Michael talked and we took her.

Her name is going to be Honey. She looks JUST LIKE our Buttercup. I will post pictures of her down below. She is 3 years old and just had her first calf in June. We got her loaded up and headed toward home. The man had told us where a couple of tire shops were locally and we went to both of them. One was closed and the other one did not have the right size.

We got part of the way home and got another flat tire. The man at the farm had given us an old spare he no longer needed that was the right size, but the rim would not fit on our hub. We had saved that piece of cement which came in very handy. Michael had to climb over a fence on the highway and go ask at someone's house if they knew where there was a tire place. Another God thing.... this guy said his brother was a tire guy, but not on call this weekend, but he knew who was. He called him for us and he came out and put 2 NEW tires on our rims. So, we had a new spare in case there was more trouble. We made it home and got her unloaded.

Clover kept running after her I think just trying to smell her and stuff. She seems settled in out there now. It takes us a few minutes to catch her to milk each night. She will get used to us. We were going to hand milk her, but her teats are very small. We were going to be there a long time. The back teats could only be milked with 2 fingers and your thumb. The family she came from used the same sort of little milker we have and she did much better with that. She is not totally letting all of her milk down for us yet, but we will keep working with her.

Honey is home and we are so grateful to God for showing us this cow and picking her out for us. The milk tastes good and there is lots of cream. 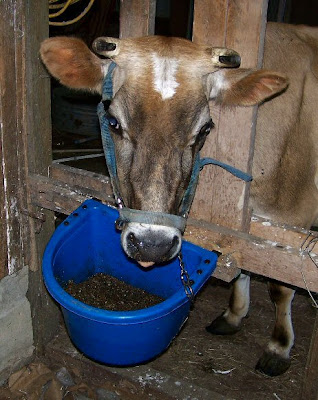 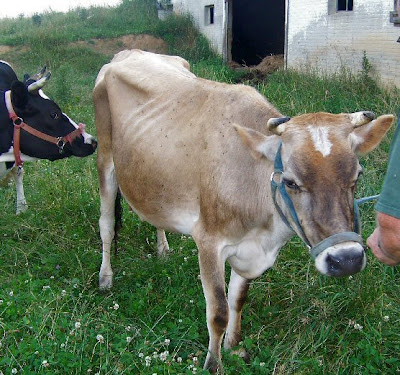