The Joys of Spring

Spring is a season of new beginnings. All of creation comes to life after a long cold winter sleep. It still surprises me a bit to look out and see green grass. I was so used to everything covered in white or brown when the snow would melt. You start to see a blush in the woods as the trees starting putting forth their buds. Even when you think it is still way too cold, you see the daffodils push through and the crocus coming up. How someone could view the world around us and not believe in a Creator is beyond me. The daffodils come up every year and they are the same. There is a rhythm and timing and someone is orchestrating this beautiful unfolding. I can go out and walk around the yard just looking for all the beautiful signs of Spring. It fills me with joy and sometimes even wonder at the beauty of it. I know I have said this before, but God could have just given us black and white, but He didn't. He chose to bless us with colors and textures and great beauty in detail. I have no proof of this, but I truly believe that when we get to heaven and see what He has there for us, all of this will be just like black and white.

Here are some scenes from around the farm. The Bradford Pear is blooming. 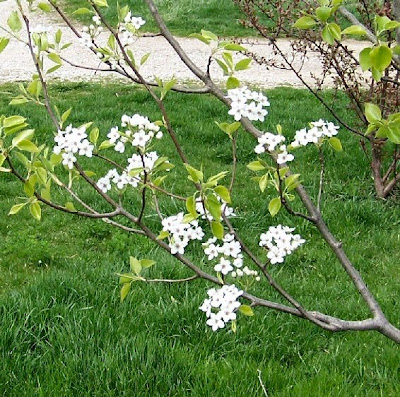 The lilacs are full of buds this year. It is supposed to go down to the mid 30's tonight. I hope they don't freeze and die. 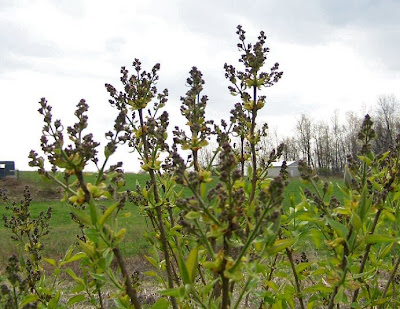 The Forsythia is just full of blossoms this year. I have really enjoyed it. The Wonderful Neighbor woman came over one day last week with her youngest. I took pictures of the little Neighbor in front of the bush. They really came out cute. 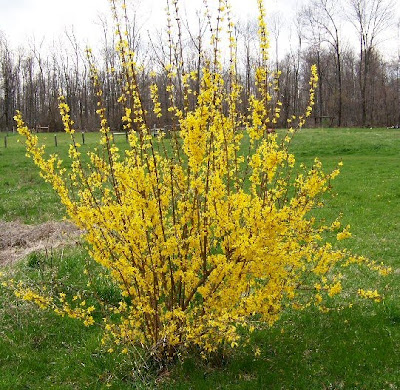 You can see the branches are loaded with blooms. 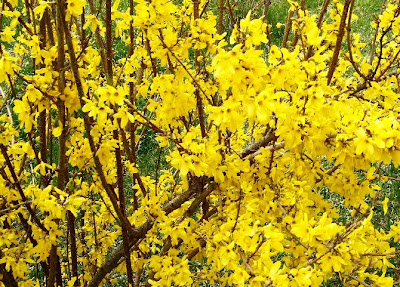 I have some pretty wretched chickens though. They are getting into my herb beds and using them as a place to take dust baths and to scratch up. We are going to have to get a fence up around the garden and soon. Michael planted a rhubarb plant this past weekend. It had the cutest little red rhubarb stalks coming up. The chickens dug it up and separated the stalks from the roots. Here you can see them enjoying one of my raised beds. 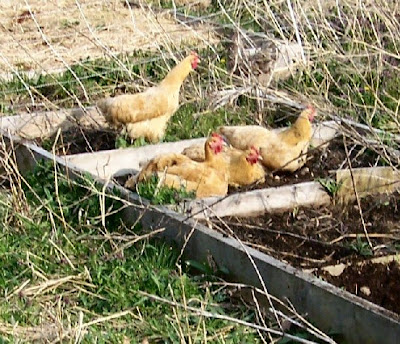 Knit had her twins on Monday evening. She had 2 little ewes and they are both black. We have not chose names for them yet. 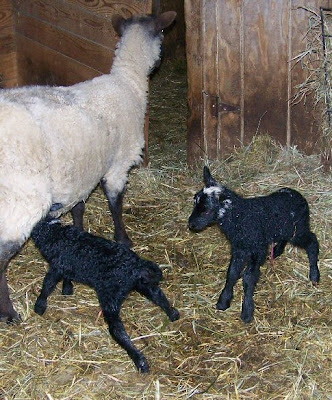 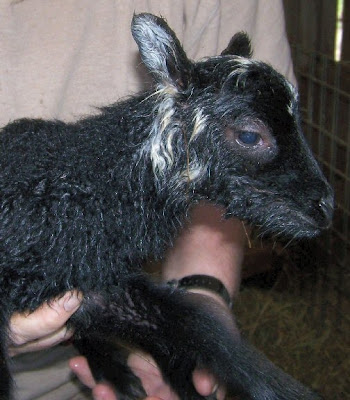 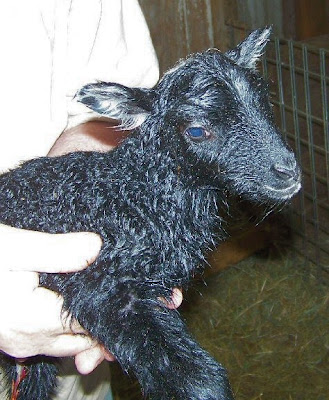 This little guy always poses for me. I have a bunch of pictures of him. His name is Vanilla, but maybe I should have named him Hambone. 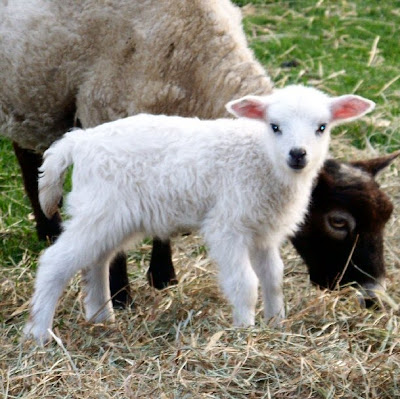 I love the markings on Rambler (the white and brown one). He is kneeling down to say his prayers before he eats. :) Not really, they do this a lot when they are little. 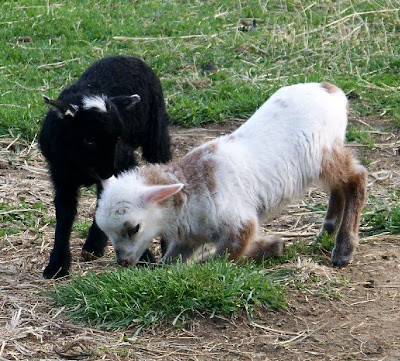 This is Chocolate and Vanilla having a deep discussion. 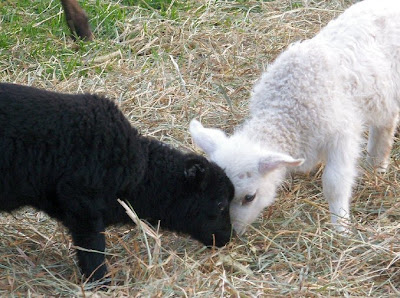 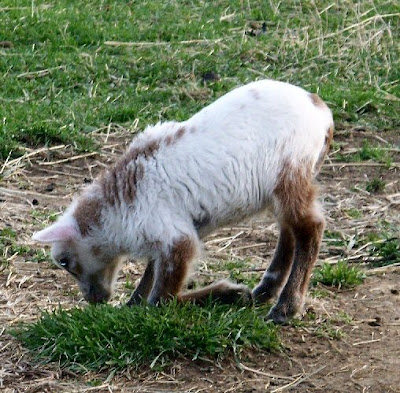 This is Purl the Second and Lamb Chop. Lamb Chop is probably my favorite lamb this year. I love her markings. We may keep her and breed her to see what she throws. She has some brown on her face that is not showing up here. 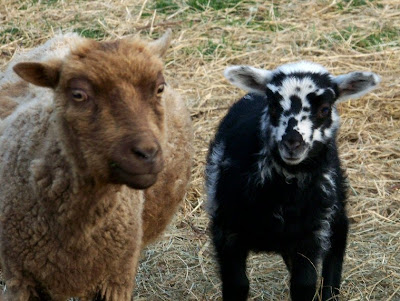 Then yesterday, Rachael (the final one to lamb) had her twin lambs. She had a white ewe and a black ram. I think we are going to name them Ebony and Ivory. Here she is with the white one. We thought she only had one lamb. We went out and she was in the stall with this little girl. Earlier in the day, I had gone out to take a video (see below) and you can hear a little tiny lamb crying. Many times the moms get busy eating and they don't respond right away. He sounded so tiny and I kept watching to see who would come and help him. None did so I though maybe his mom knew he was OK, but I thought I would watch. When Michael came home he heard a little one crying and said it sounded tiny. I told him that I was pretty sure that Rachael had her babies, but had not been out to check yet. So we went out and found her with the white lamb. The white lamb was totally dry and doing really well. We were sort of surprised though that she only had one. I went out into the pasture to try and figure out what was wrong with the little one that was crying. I was not sure I could catch him, but he had laid down. I went over and scooped him up and started walking figuring the mom would come running to see where I was taking her baby. No one came. So, then I started looking around and sorting out moms and their babies. I kept coming up with an extra. Michael went into the shed to see how many were in there and we did have an extra so this little guy had to be Rachael's. I took him in and held him out to her. She started nickering in a motherly way. I sat him down and he immediately went around to nurse and she let him. We locked them in last night to let them bond. Poor little guy was so hungry. He nursed a long time. 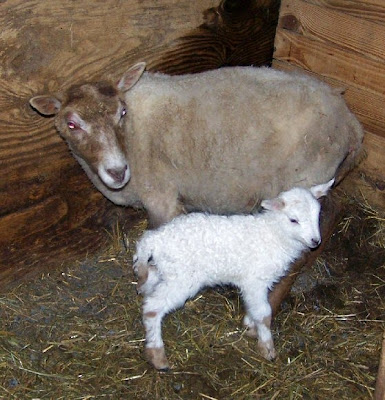 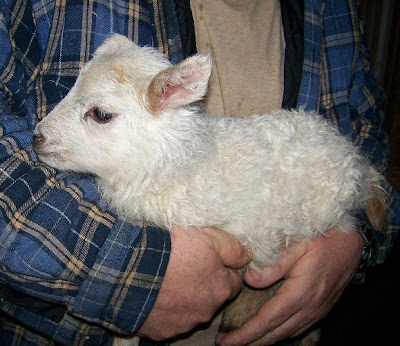 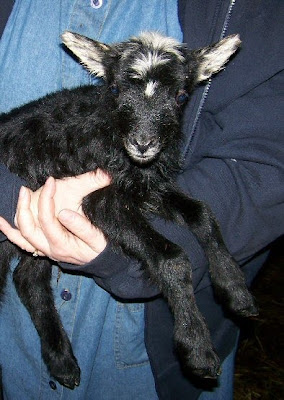 I saw that there was some great lamb racing going on out back. I went and got my camera and turned it on to see if it was working... it was. I switched it to video to see if that was working... it was. I went out the back door and all the lambs quit running. :( I took this video though to show you some of the joy I get to watch. You can see the pup wanting to get in with the sheep. :) There is also a short gross part near the end of this little clip. As soon as I realized what was going on, I panned away. Sorry. Also, I sound like a real goober on here. :)

I had these beautiful tulip buds out behind the house. I was looking forward to seeing them bloom and bringing them in the house. 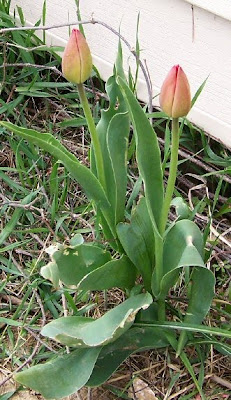 Then I went out last night to take the above video and found this...
Death of a tulip... 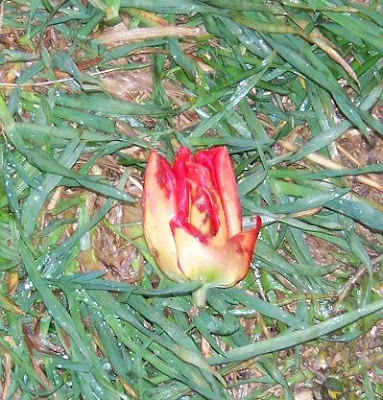 The pup was a little too anxious to see what the color was going to be. Sigh... 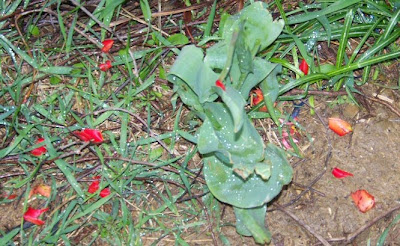 We have baby goats right now so I know how much fun you are having! I know what you mean about the chickens. Some days I could just be done with them. :-)