We have been experiencing another winter storm. Yesterday was gray and overcast, but the snow did not start until around 4:45PM or so. It snowed quite a bit in the evening hours. Then right before we went to bed, we could hear the freezing rain and sleet hit our windows. We stopped and prayed that we would not lose power. We would be in big trouble without electricity. We have had to use quite a few electric heaters just to keep pipes from freezing. Each time I got up through the night to check on things, I would hear the sleet and freezing rain on the windows.

Michael got up to go to work this morning and found that the county between us and his job was at a level 2 snow emergency and he knew that the roads up here would be even worse, so he called in. It started snowing with huge flakes about 9AM. They said we should get another 3 to 5 inches of snow today. Michael went out to do chores and said there was at least 2 inches of snow on top of the ice we got. It is still snowing hard, but the flakes are finer. My son said the old Indian saying is, "Snow like meal, snow a great deal" . We have found that to be true. We are not sure it is really an old Indian saying, but it sounds good. :)

Here are some pictures from today. These first four are while the big flakes were coming down. 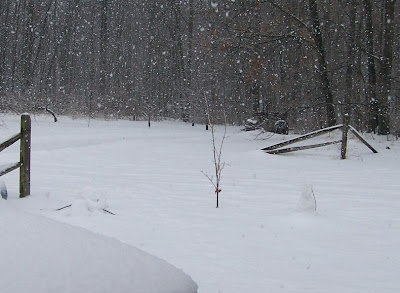 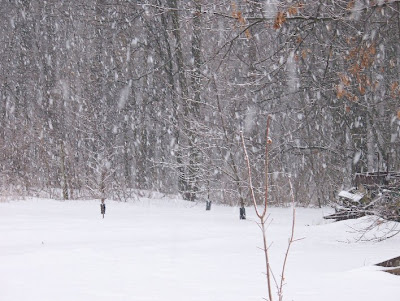 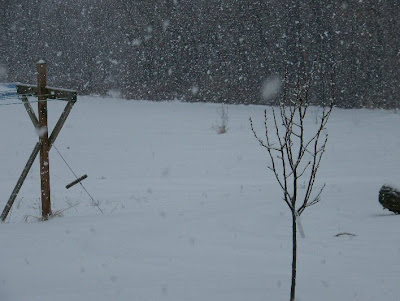 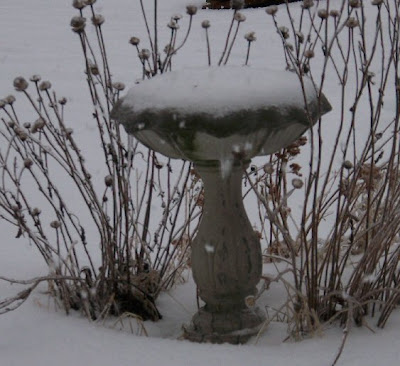 I went to take some pictures out the back door. Here is what the glass on the door looks like. :) 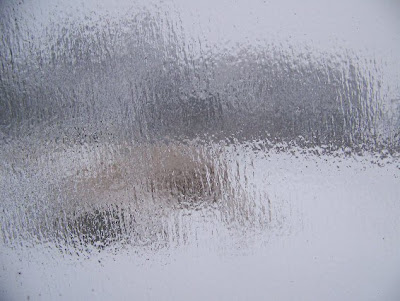 If you click on this picture, you can see the ice on the ferns from the asparagus. The two pictures after this one are close ups of the ferns with their cloak of ice. 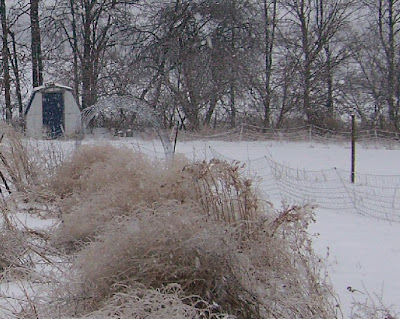 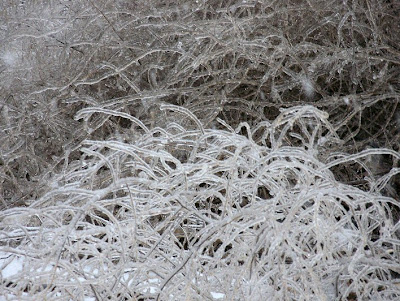 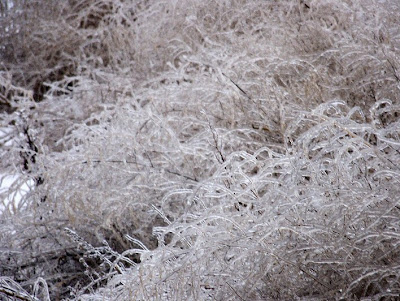 These pictures don't even do it justice as to how hard it is snowing. 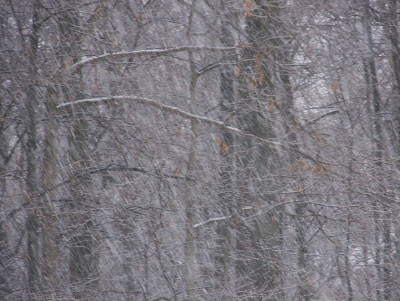 This is where ice gets us in trouble. Our fences are all electric netting or line. The ice weighs them down and they fall. Then we have to lock the animals in the barns. So far, these have not fallen. 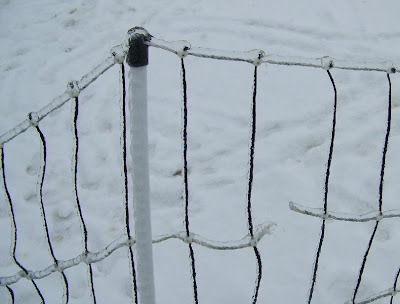 Here is a weed that is showing its shiny coat of ice. 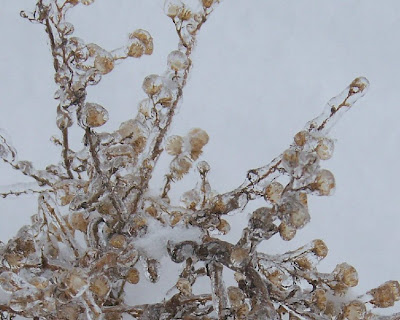 The next two pictures are of trees that are ice covered. 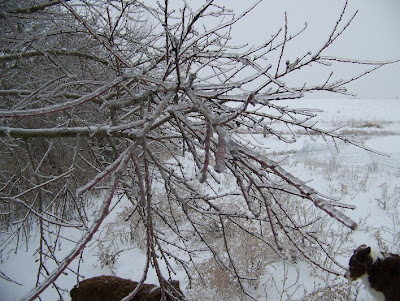 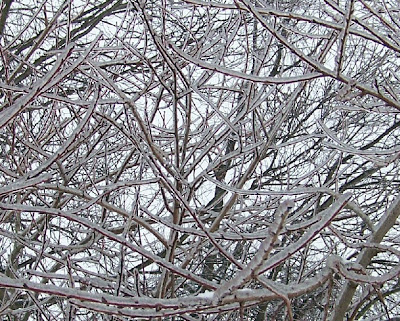 This picture is taken from the chicken coop looking back at the house. 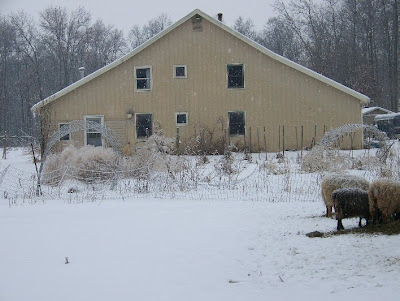 This is another weed. It is bowed down under the weight of the ice. 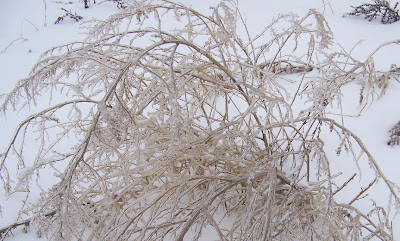 It is amazing what can become like art. This is one of our garden tepees. 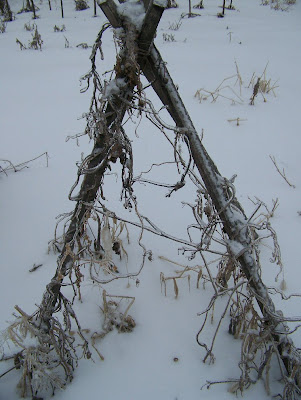 I love how this weed laid over on its side as if to make some sort of picture art. 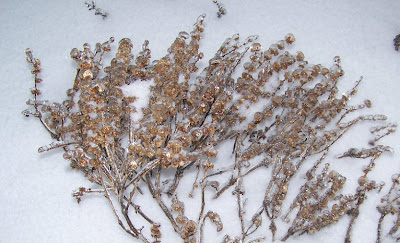 This is back in the garden area as well. 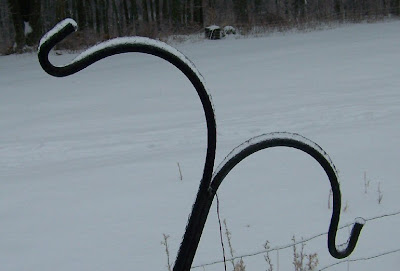 This is out front. The ice is coating our honeysuckle bush. 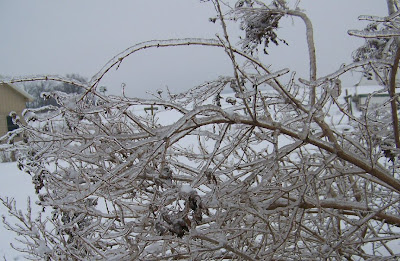 Because of the ice and freezing rain, the snow has a crust on it. Michael called the dogs to him to see if you could hear the crunching of the snow as they ran.

These last 2 are of the sheep. They are out eating their hay. Their wool gets so coated with the snow. It does not seem to bother them at all. 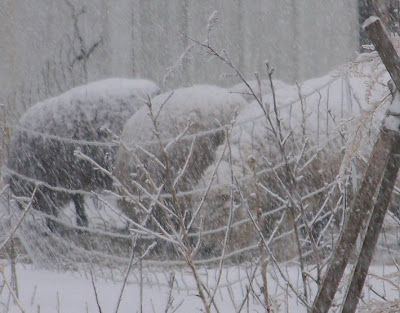 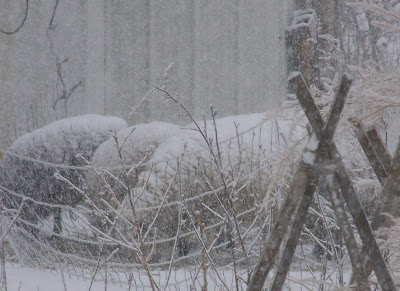 Wow, that's a lot of ice and snow! Is this normal for you guys to have that much snow? It is hard to believe the temp difference here in FL. It is suppose to get up to 80 today. I will be praying that you all don't have frozen pipes or broken fences.
Stay warm!
Pam

Marci,
I am so glad you still have power. South of Bowling Green, Ky, got this storm too. My mom's area has been without power since yesterday. I MADE her call my brother to come and get her so she would at least be with somebody. Now the phones will not work...apparently the cell phone towers are covered in ice. I would be so concerned about her if she weren't with my brother and his family. They haven't even said how many days it will be before they get the power back. Stay warm and be blessed!!!! By the way, your pictures are beautiful! I like the winter time.
grace and peace,
julie

I can't thank you enough for mentioning the CD. I listened to it online and want to buy several copies to hand out. It is amazing.
Hope you don't have trouble from the weather.