Tuesday at the Farm

Yesterday started out as a very quiet day. Too quiet. I liked the hustle and bustle of my household full of people. I had finally come out of hibernation. It seems I slept away a lot of the week end, just catching up. :) Josh & Britt ended up coming over for part of the day, so that really helped.

This afternoon, we are supposed to get from 1 to 3 inches of snow and then freezing rain on top of that. According to the radar, it is snowing here now. When you look outside, there is nothing falling from the sky. I wonder if we will get any snow at all.

We had to have Molasses AI'd (artificially inseminated) a second time. It is really handy when we are able to use a bull. I hope she took this time. We will also be watching for signs of heat in Clover to see if she took or not. Here is a picture of Molasses. When she was born she was honey colored. I named her Honey. Then she turned darker and darker. So, I changed her name to Molasses. We are breeding her and Clover to Angus. 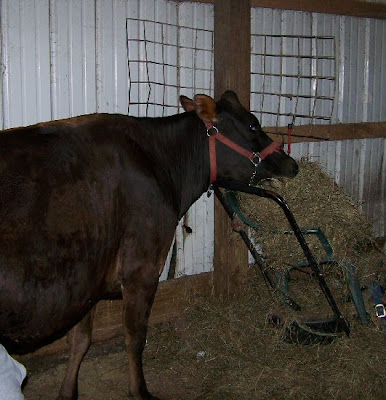 We bred Buttercup to a jersey bull again. I am praying for a honey colored heifer that stays honey colored. :)

You will notice the "jeeter" (read hillbilly) in us when looking at the picture above. Molasses was being milked in this picture. She does not like to be milked and can be a bit ornery. We devised a hay rack out of an old push mower and a plastic lawn chair. She did not want hay. :) She did not want anything, except for us to quit milking her. She did however let several calves nurse off of her. At one point we realized that she had 4 calves nursing. We moved her with 2 of them to another pasture. She let them both nurse until they went to the butcher. That makes for some good meat.

Here is a picture of Buttercup right after she had Clover. Buttercup has been the best cow ever. We KNOW that God picked her out for us, because we were basically clueless. We had a book in one hand looking at pictures and then looking at her. She was the third one we looked at. We liked how she looked, she was young and she was pregnant. Clover is a full blooded jersey as well. You will notice in the first 2 pictures that she is brown and white. 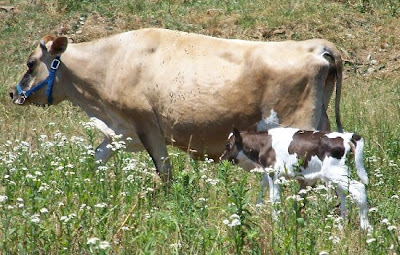 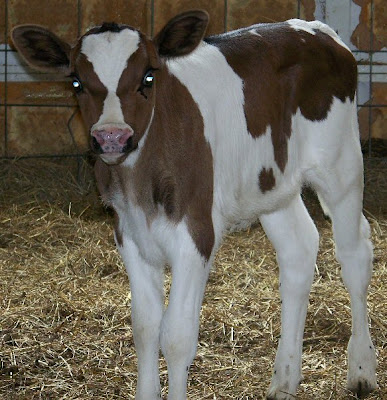 As time went on, she got darker and darker. She now is such a dark brown that it almost looks black. People think she is a Holstein. 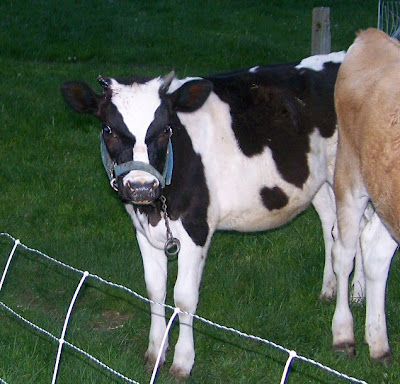 Both Molasses and Clover are Buttercup's daughters. We figured Buttercup must be 13 years old. We got her in November of 1998 and she was very pregnant (she calved in December) with her second calf.

As I am writing this, I hear freezing rain hitting the window and there are a few flakes coming down with it. I will keep you posted.

Have you spent time with the Lord today? I want to encourage each of you to set aside some time each morning to spend in the Bible and in prayer. It will change your life. :)
Posted by Marci at 9:17 AM

Marci
I would like to have some of our snow :)Your animals always look so healthy and well taken care off.
Have a great day.
Lisa

Greetings, Marci!
It's been too long since I've been by. I've enjoyed peeking into your life on the farm!
I hope you are doing well and enjoy this week!
And, yes, being in God's Wonderful Word will change your life. Praise the Lord!