This is a Very Busy Week

I am not sure how much I will be on here this week. We are hosting an IBLP Advanced Seminar in our home. It is from 7PM to 10PM Monday through Friday, all day Saturday and part of the day Sunday. There has been SO much good information. You can barely keep up with taking notes. There will be a lot of things to review and try to digest after the week is over. Until then, you just hold on. We scramble to get our chores done by 7PM. Joshua has graciously agreed to milk the cow this week. That was one chore off of Michael. We were about 15 minutes late starting Monday night. Last night we were ready to go. Huff puff huff puff.... =)

One of the things that stood out to me the first night is called Target Praying. It is to me a new way to use prayer as a weapon. If you have a besetting sin or something you are trying to overcome and you struggle to do the right thing, then this weapon is for you. There was a man who struggled so badly with lust and pornography that he was losing his marriage. He said he was powerless to overcome this. The person who was counseling him asked if there was someone that he could think of that desparately needed to be saved and if saved would cause great destruction to satan's kingdom. He said he yes that he could think of someone. They told him to promise them that each time he was tempted to lust that he would pray for that person's salvation. He agreed. He also struggled with anger. So, they had him think of someone else to pray for in those times he was starting to become angry. Within 3 weeks it had already made a great difference. He kept it up and eventually the wife called and thanked the counselor for helping her husband and saving their marriage. Satan does not want us to pray for those people. He also told of a little girl who was afraid of the dark and had been all her life. She started praying for a cousin of hers each time she was fearful. She quit waking up at night and the next summer was able to take the cousin to VBS and she was saved. A father had 2 boys that would not quit fighting with each other. He asked them that each time either of them felt like fighting to pray for him to be a better witness at work. They started doing that. He said it was incredible the opportunities he got at work. One man even walked up to him and asked what it meant to become a Christian. I am going to start using this weapon.

Last night they talked about spiritual gifts. We all are given one at salvation. This is our motivational gift. This is what really drives us. This is the one that we need to concentrate on. Then we develope or have some as ministry gifts. Gifts we use to aid the church. Then we have manifestation gifts given to us by the Holy Spirit. He went into great detail about the characteristics of each gift and also the outcome if we use it carnally. I am praying that God will help me to be a "doer" of what I am learning.

Here is a picture of a pumpkin that a friend gave to me. It is called a Kaki pumpkin. She is not sure what the actual flesh is like, but it is an heirloom variety that is used for its seeds. I am going to save some seeds out of it. 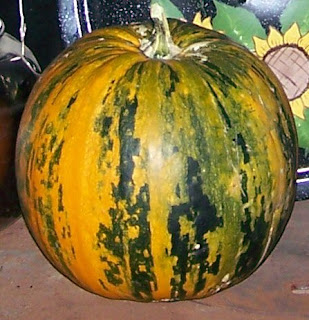 Here's a little fall touch in my living room. The picture is of my parents and my four brothers and myself taken at my parents 50th wedding anniversary. 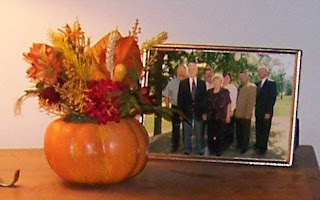 This beautiful pumpkin plant is growing in my driveway. =) I asked the guys to spare it and see what it does. =) 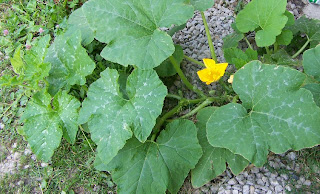 Here is a picture I took of Dixie today. She is really growing. Puppies are so fun, but they have way too much energy. It is also amazing what they can find to chew on. 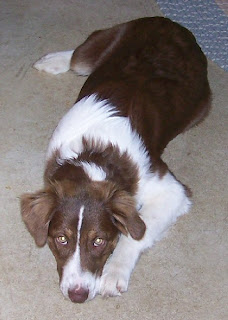 Have a wonderful day and don't forget to spend time in your Bible and in prayer talking with the Lord. This is a major priviledge we have.
Posted by Marci at 12:18 PM

Thank you so much for sharing what you are learning each night. I am so going to try the praying for someone else ideal.

Thanks for sharing about the seminar with us Marci. I appreciate it. And...the pumpkin looks really neat. :)

The pumpkin is just used for seeds, the flesh is not very tasty. Use all the seeds. Roast them and eat them. They are hulless and good!

Sounds like the study is going well. Love you all. Your pumpkins are beautiful.

Your heirloom pumpkin is beautiful!!! Enjoy the seminar.

I hope the week went very well. The puppy is getting so BIG! I am looking forward to hearing more about the seminar. Thinking of you!

Your week does sound full but rewarding!