I had several people email or comment on my earlier post on tomatoes. I made changes the next day after posting that. =) I am not sure what happened, but I was not thrilled with the outcome. When I have canned tomatoes in the past, I always get a bit of separation of the solids and the liquids. It may be a half inch at the bottom of the jar. If you shake it all up, it did not usually separate again. Well the batch I did on Tuesday and blogged about REALLY separated. When I was taking the jars out of the canner, the solids were oozing out the top of the lid. I was not a happy canner. If you look at the picture below, you will see the jars that I canned on Tuesday. They really separated badly. This is after I have shaken them as well. All of the other jars you see are the ones I canned on Wednesday and today. Praise the Lord, I am done with tomatoes for this year.

I called one of my friends (who is young enough to be my daughter). I asked her if they had problems with separation when they canned. She said no and then told me how they do it. So, I decided to try it. It took one of my steps out, but added another. I washed the tomatoes and took off the stems. If you can tell from the picture below, I have a really neat pan. There is an insert that is like a colander. It goes all the way to the bottom of the pan. 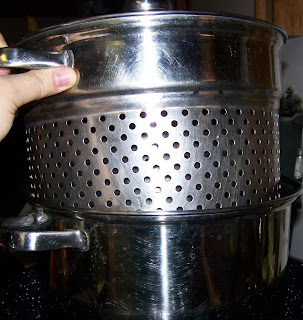 I put water in and got it boiling. Then I would fill the basket/colander with tomatoes. I would immerse them in the boiling water for 4 minutes. This saved me the step of cutting them up. Then I would lift the basket out and set it in a shallow granite ware bowl I have. I would then take the bowl and all over to the Squeezo strainer. It would fill the hopper. I would then add more tomatoes to the basket and put them in the boiling water. I would then just work the tomatoes through the Squeezo. They came out really nice. Then after I had them all run through, I brought the tomato juice to a boil. I then put it in jars and canned them. These turned out great.
Posted by Marci at 9:19 PM

Marci,
Thanks for sharing your technique. Next year we hope to can tomatoes - along with many, many other fruits and veggies. Glad to know you figured out the separation issue! Your next batch is beautiful!!
Paula