Take Me Out To The Ball Game

Today our fellowship met outside in the beautiful sunshine. Most of us got sunburned. =) Michael and I had to leave early to go to a shower for my niece. They all had the meal together and then went to the ball park. We got there as soon as we could. I love this first picture. It looks like she is standing in front of a painting. I took this with my telephoto lens. I am up by home plate and she is on the base line between 1st and 2nd bases. 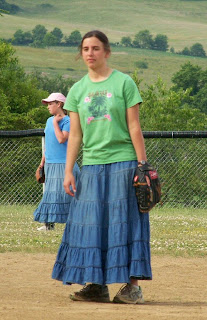 All the action was not on the field. We were watching climbing exercises in the dug out areas. This was taken, just before her Mom told her to get down. 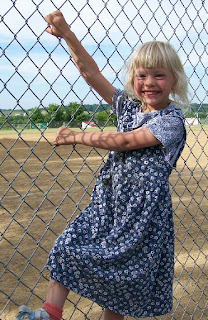 Here is one of the batters in action. She could really whack that ball. It was so cute, she had on little bobby socks and saddle shoes with her pink dress. How long has it been since you saw a pair of saddle shoes? 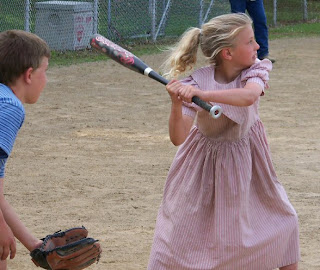 Here is Joshua intent and ready for whatever action may come his way. =) I think one of the little people were up to bat.

Speaking of the little people up to bat.... This is one of the outfielders. I believe they were all in this position. 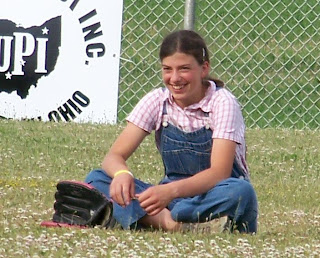 Someone had brought along their dog. The littlest ones were thrilled to play with him. Makes you think of that saying.... "A Boy And His Dog". 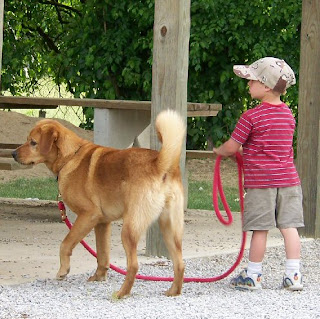 This is one of the little ones having a tug of war with the dog. The dog, Buster, had grabbed someones cup and she was trying to wrestle it away from him. 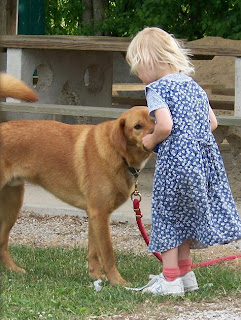 On to farm stuff. They cut our hay and they baled it today. We did not get as much as we would like, but we got hay and we are thankful for it. I don't think we will have any to share with others this winter. =( Now, does this cow look pregnant? Or should I say, guess which cow is pregnant? Poor Buttercup. She is bagging up, so we think that she will have one soon!!! 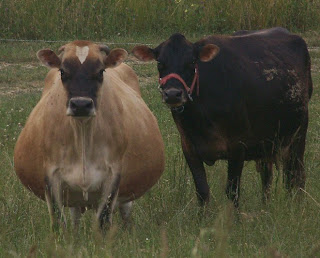 Thanks for sharing your day, Marci! By the way, I've never seen a bigger cow in my life! How can she even walk??

Is that cow having twins!!! It hurts just to look at her. The pictures are cute. You're right. I thought the first one, even before I read your comments, looked like it had a painting for a backdrop.

The baseball game looked like alot of fun! (And your new camera looks like it takes great pics1)

Even a city slicker like me can tell which of them cows is expectin'! LOL

The baseball game looks like so much fun, Marci!!

Ball game fever was in the air. Our church family enjoyed a friendly game too. We had so many that we could have had two games going! Of course, older folk (like my husband and I)were more content to watch.

The ball game looks like so much fun...I just love summertime.

Hopefully Buttercup calves soon, she can't possibly get any bigger can she??!!

Looks like they all had a lot of fun! I know the game isn't as exciting for the big ones when a "little one" is up to bat, but it's nice they get to play too. ;)

That cow is huge!! The pictures of the ball game were so cute!

What a fun time everyone is having! Makes me wish I was there too! And I sure hope your cow delivers soon. She is huge!!

The game looked like so much fun! I love how much fellowship your family enjoys with the other families you home church with. :-)

I hope your cow has her calf soon. She is so big! I guess I'll feel that way in a few more months! :-)

Looks like a fun day! I think you should entitle that picture "A Dog and His Boy"!!