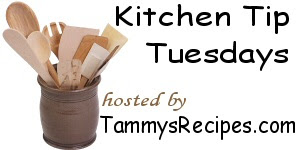 My friend Ginny told me to post a tip for Tammy's Kitchen Tip Tuesday. I thought and thought and came up with this one. I have a rather large spice cabinet built into the wall in my kitchen. Someone gave me a box full of Polaner All Fruit jars that were empty. They thought I might know someone who could use them. I must have a reputation of having a lot of contacts as this sort of thing happens often. Anyway, I thought they were just the right size for the herbs and spices I use most often in cooking. I fill them up and then labele them. I had my son make me a little set of shelves that was like a stair step or a little set of bleachers. I put the jars of spices that are used almost daily on the front row and they are in alphabetical order. I buy all of my spices and herbs in bulk. With the ones I use most often on the front, I can quickly see what needs to be refilled. Hmmmm... Maybe I should take a picture. The first picture only shows 3 shelves in the cabinet. It is actually built in the wall. The back of the cabinet is the drywall on the wall in the room behind this. On the second picture I took out 2 of the jars, so you can see the little stair step shelf my son made. 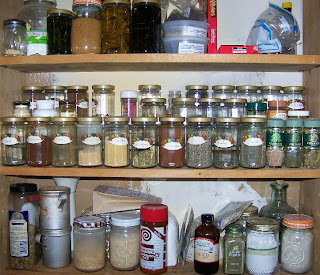 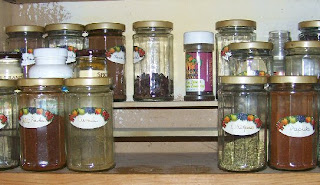 Marci I love all the spice jars!! Makes me hungry!!
I am so glad you got to see bears. I love the mountains...my favorite place is Cades Cove, Tenn! You see gobs of deer & bears there. Now I live in a beautiful part of the world but when I got to the mountains....I feel like I am really close to GOD. And just imagine....Heaven will be better! Love your cute pup too!

Great idea! And I love the labels.

They look pretty and all organized. For some reason I like to collect little empty jars but I don't always find uses for them. I do have a collection of the smallest size baby food jars in my sewing room drawer with pins and etc. in them. They fit well and are so cute.

what a wonderful idea...I love the "bleachers" how very organized. and using the insides of the wall all the way to the back drywall is so space saving.

You have a nice blog, too.