It got up into the 50's today. The sun was shining. All the animals were glad to be out on green pasture. Here are some pictures. 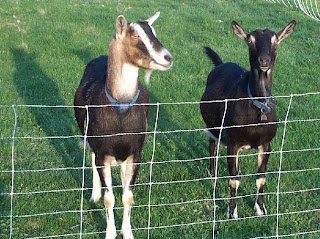 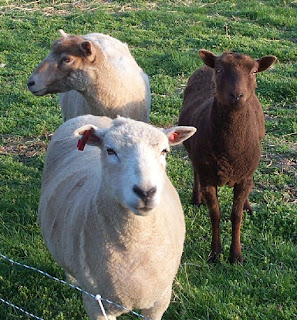 I was reading over on The Deliberate Agrarian's blog and he too mentioned the disappearance of the bees. Here is a quote from his blog.

"The Bees Are Dying

Have you heard about Colony Collapse Disorder (CCD)? Millions of bees are mysteriously dying. I understand the national news has been talking about it.

When I first heard about this problem a couple months ago, I said to Marlene that it’s probably caused by pollen the bees collect from genetically modified plants.

Well, the latest issue of Lancaster Farming newspaper has a front page article about CCD which states: "While an exact cause for the disorder has not been determined, scientists believe CCD may be caused by a number of different factors including travel stress, other insects, pesticides, genetically modified plants and pathogens."

Oh, but surely the big corporations that create these genetically modified plants must have tested their effects on the honey bee. And surely our government, which has allowed these corporations to release their GM creations over the land, made sure they were safe for the honey bee. (Insert sarcasm if you didn’t already read it in those last two sentences)

Well, if it does turn out that the bees are dying from FrankenPollen, you can bet the scientists will "fix" it. Those "benevolent" corporations will just create a new GM strain of bee. Problem solved.

And we are left to live with the consequences of their foolishness."
Posted by Marci at 9:07 PM

Marci I feel the same way. As I said yesterday...I beleive they are dying b/c of the sprays but I never thought about the geneticly altered plants. I think that is a possibility. OK this is gettin a little off but Danny & I have wondered if we should continue to put our money into retirment funds. I beleive our economy is going to fall sooner or later & when it does it will make the Great Depression look like Glory days. Now I say all that to say this....when the economy falls people will never be able to go back to raising your own food...growing your own meat...everything is soooo geneticly altered that we will not be able to grow a cotton pickin thing! If you cant grow food...everything is messed up. Plus I think with the way people are now a days...instead of working all day for a carrot...they will just shoot you for it. You & I know the answer to our problems is GOD but Satan is really on a roll. OK did I just sound like a really crazy person or what? Just a thought. LOL It looks lush & pretty on your farm.Come & look at my pecan trees...they are burnt.

Your pictures are wonderful. I wish I was looking at green grass today. Thanks for stopping by my site today, stop back any time!