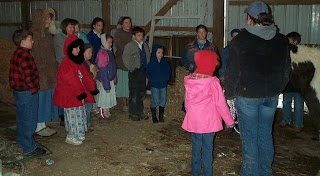 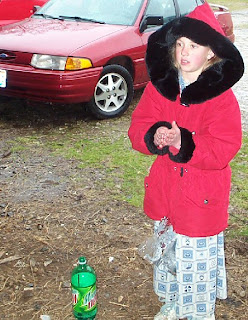 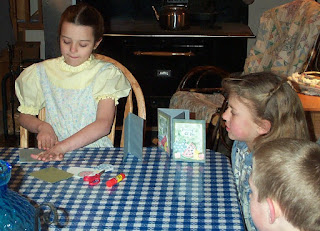 Yesterday was our God's World meeting for March. My niece is a horse trainer. She works for Jesse & Stacy Westfall at their ranch here in Ohio. Stacy won the Road To The Horse Competition last year. It was the first time a woman had been invited. Here is what the website says about the competition. "A unique event showcasing the true test of competitive horsemanship. Four of the world’s top horse whisperers meet four virtually un-touched young horses. A team of judges watch each clinician demonstrates his unique way of gentling a young horse and preparing it to be ridden. In just three hours together each horse and rider team will have to negotiate an obstacle course. A winner is chosen, but in truth, the real winners are you, me and our horses."

Stacy won the competition last year. Here is what they say about her. "Stacy Westfall, from Mt. Gilead, Ohio, was the first woman to compete in and the first woman to win Road to the Horse. She wowed the 2006 crowd with her bridle-less, freestyle demonstration before Road to the Horse competition began. Once she selected her untouched colt, Stacy decided "Popcorn" would be hers. She offered to buy him on day one of Road to the Horse competition. Now, Stacy and Popcorn are working together and plan to return together for the 2007 Road to the Horse Champion of Champions competition. The 2005-2006 show season proved magical for Stacy. She won all six nationally ranked freestyle reining events she entered--including the All American Quarter Horse Congress and the National Reining Horse Association Futurity. Stacy first entered the show pen without reins in 2003 when she won the NRHA Futurity dressed as the Ghost Rider from the famous Johnny Cash song."

I got off track there a bit. Anyway, Carli came and brought her family's pony, Webster with her to tell us about horses and also to relate horse behavior and training to our relationship with the Lord. They have several horses, but Webster loves children and likes the attention. She did an excellent job and makes a great public speaker. It was raining cats and dogs outside, so were under the shed roof of our barn. The rain on the roof was almost deafening. You will see the children watching in the pictures above. If you notice the third picture, the cows were also watching. I turned around to just look at the cows and Buttercup, Molasses and one calf were looking through or over the fence at the pony and the children. =) The children were allowed to ask questions, pet the horse and brush it. Carli's fiancee, Matt came as well as her two youngest siblings, Brett and Kati. It was good to see all of them.

Then one of the girls did a demonstration that needed to be done outside. They took an empty 2 liter bottle and put in about an inch of "The Works" toilet bowl cleaner. Then they wadded up small balls of aluminum foil. They had to do quite a few of these balls. It was not working at first, so they kept adding more foil. Some sort of chemical reaction takes place and the bottle explodes. It looked like nothing was going to happen, so we all went inside. We had barely all made it through the door and "BOOM" there was a loud explosion. I guess we didn't wait long enough. =)

The next demonstration was by another young lady. She showed the children how to make a beautiful greeting card. She brought a kit for each person to be able to take home and make their own card.

It is always a good time when we get together and we usually learn something new.
Posted by Marci at 10:48 AM

Looks like you had a fun meeting and the children all got to learn some wonderful things.
Your weather sure looks colder than mine now : )

Looks like you have a nice little group of youngin's learning many good things.

What a fun time! The girls would have loved the explosion! LOL.

I have just found your blog and I love it!! We too do the horse thing. Well, I should say my children love the horses. I just pet them through the fence. It looks like you had a great time. My children would have loved that.
Blessings,
Trixi
homesteadblogger.com/spencerschool