Harvest time is starting to gear up and be serious. :) This spring, we had a few potatoes that had grown sprouts and become wrinkled. Our farm apprentice planted them the week he was here. We did not get tons of potatoes, but we got a lot more than we planted. Plus, since we were not able to eat the wrinkly ones, this is a bonus!!! 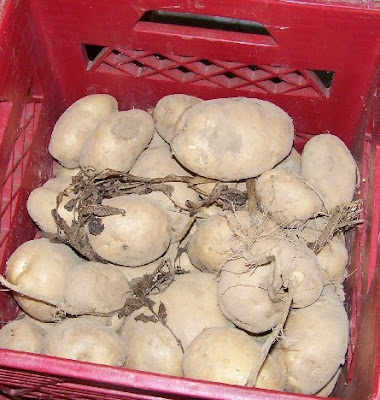 We got some help this morning from the WN boys. I watched them out there working with Michael and it made me realize what a joy and blessing children are. They were having fun with "Neighbor" as they call Michael. They helped dig the rest of the potatoes and they were all squatted or kneeling down and laughing as they turned up treasure (potatoes). Then the boys dug my beets for me. I got a large laundry basket full. I hope to get to them later today. 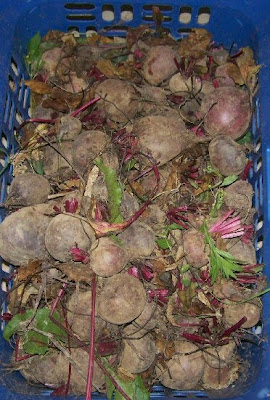 Then they moved on to help Michael pick the corn. They even shucked it for us. Michael let them eat the little tiny ears and the younger guys especially were enjoying that. 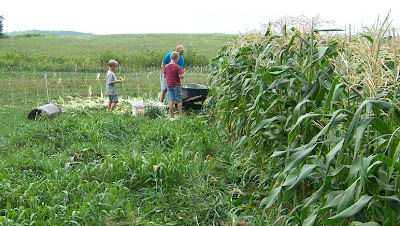 Most of these shucks you see are in the sheep pasture. I am not sure if they will eat them or not. The cows will and the pigs will too. Most of the shucks got put in the wheelbarrow to take to the pigs. 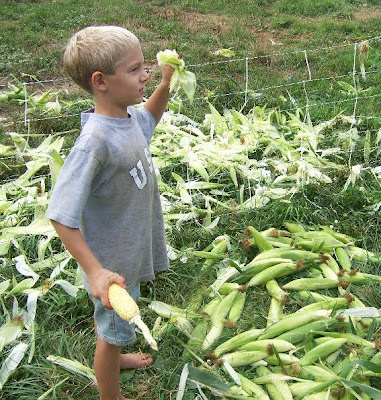 Many hands make light the work. This family is a true blessing to us. They help us in so many ways and we are so grateful for them. 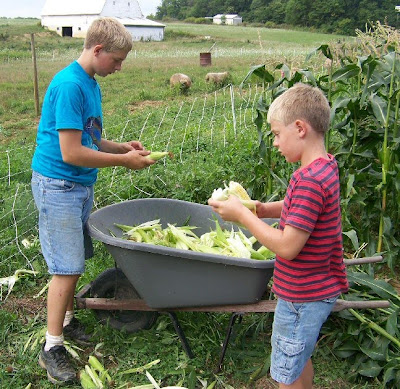 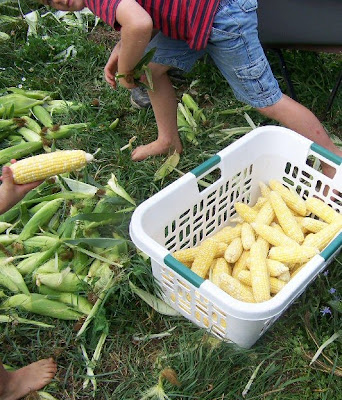 This is a large pan full of ears of corn. I counted them as I did them. There were 81 ears of corn in this pot. Here is the other basket full. 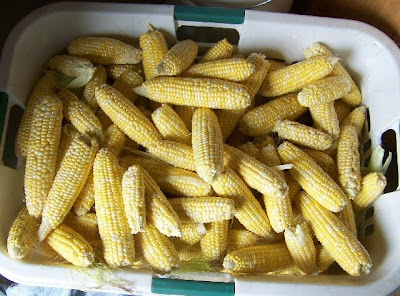 Michael helped me to process our corn. This is a tool that Joshua made for me. He took a 2 X 4 and drove a nail up through the middle. Then he routed out two places on the bottom to fit over this large bowl I have. 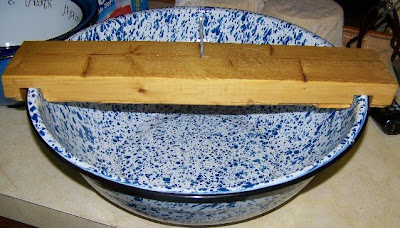 Here is the routed underside. 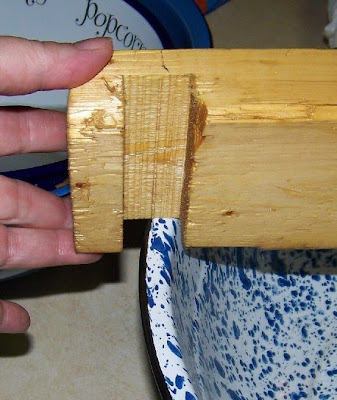 You just stick your corn cob on the nail and cut the kernels off. Then pull it off and throw it in a bucket for pigs and chickens. 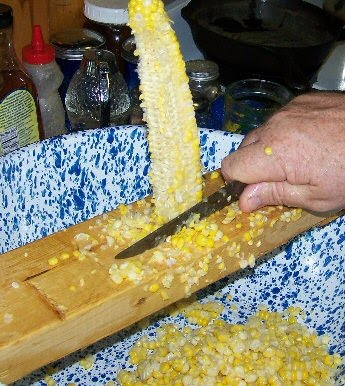 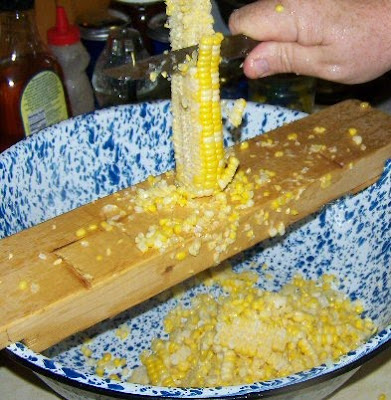 To start at the beginning, once they were cleaned and most of the silks taken off we blanched the ears for 4 mins. in boiling water. 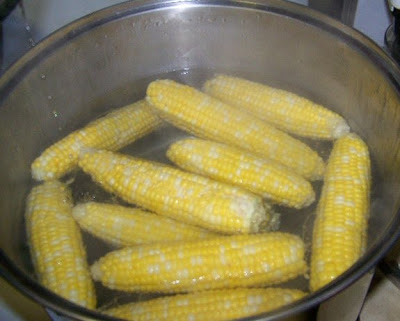 Then they went into a sink of cold water to cool down. 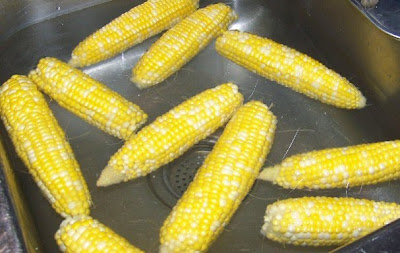 From there, they went to the bowl, where Michael cut the kernels off. Every so often, I would scoop out corn into bags to make more room. 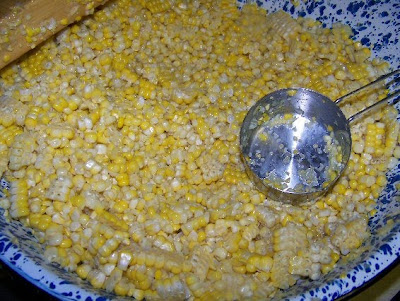 We put 3 cups of corn in all the bags except the last one got 4 cups. 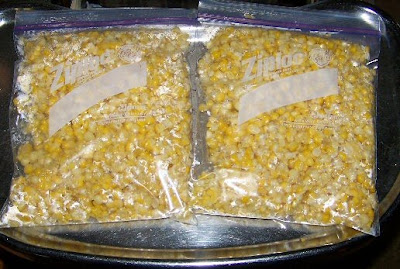 This was from the first planting of corn. We had three 41' rows. From those rows (other than what we have eaten fresh) we got 245 ears of corn. From those 245 ears of corn, we got 46 bags with 3 cups in them and 1 bag with 4 cups in it. Michael planted Mirai corn. It is a super sweet corn and it is delicious. 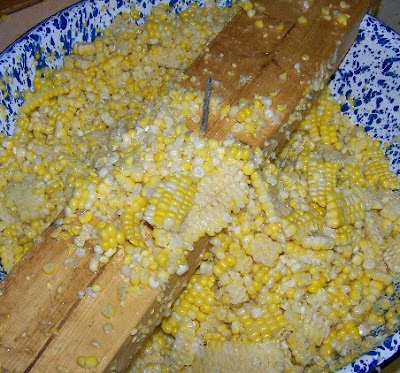 He is pulling the stalks out from the first planting and taking them to the cows. He put them across his bush hog on the tractor. :) We use it to transport lots of things. 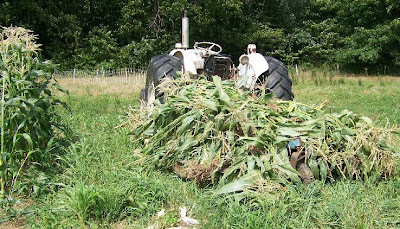 Looks like a wonderful harvest...and Hey....I saw those WN this evening! :-)

Marci,
You have fall leaves on top! It's scary to think that fall is so close. we got up this morning at 5:30 to get started on chicken butchering -- and it sure looked like frost on our chicken barn!

Oh how I am looking forward to having a garden for planting corn someday! :) We do have a small porch here and I am hoping to start a little container garden soon.

What wonderful bounty! And what a blessing to have such help. I enjoyed looking at your photos.
Hope you have a good week.

I TOTALLY love the little tool there! Could have used one myself last week! Going to make one for next year. What I've been doing is putting my medium sized cutting board inside of a large pan. When the pan got full (didn't take long), I dumped.