We had beehive equipment stored in our shop. We lost our bees that winter that so many bees disappeared. For a short while we had some bees in the shop cleaning out any honey left in them. Then they went away. Earlier this year, when our farm hand was here helping for a week, he painted the outsides of the supers. There was no bee activity at that time. A couple of days ago there were bees in the shop again. There were quite a few of them and Michael needed to use the shop today to work on cars. So last night we went out after the bees were gone and moved the hive equipment outside. He was outside working this morning and heard a loud noise and wondered what it was. He looked up and saw this!!! 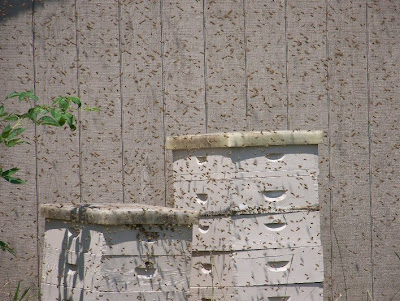 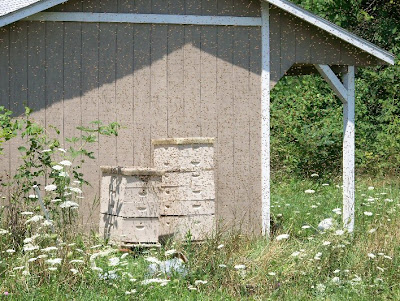 He ran in to get me and of course I grabbed the camera. There were a LOT of bees and you could hear them. I took a couple of short videos that I posted below. I went in and called a friend who along with her husband are bee inspectors for several counties. She told me it was late in the year for bees to move in. She also told me that if it was a swarm moving in, the activity would die down with an hour or so. The other bees that were in the shop might have found traces of honey and gone back and shown their friends were to find it. If that was the case, they would be there most of the day. 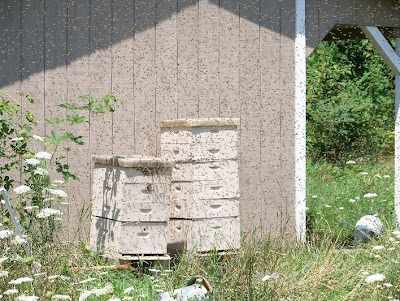 I went back out and noticed a clump of bees on one of the hives. 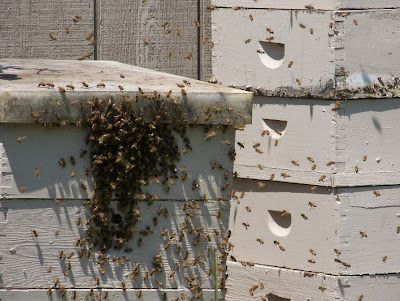 They were going in and out of the bottom board and also a little hole near the top of the hive. 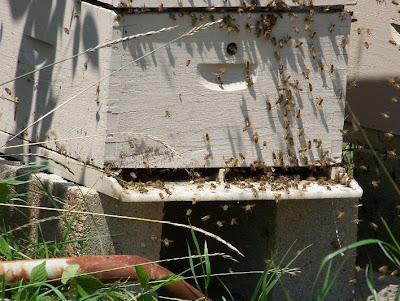 Within an hour this is all the activity there was. We are hoping that God just brought us some free bees!!! :) 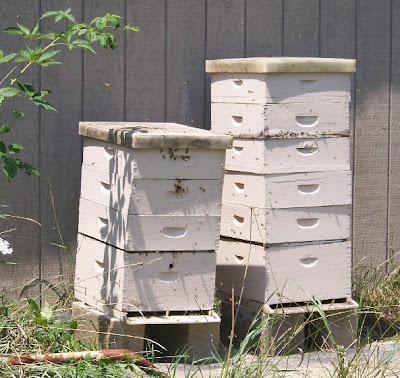 These are two short videos of the bees. Be sure and turn the music off in the sidebar so you can hear them.

This second one shows that they have calmed down a bit.
Posted by Marci at 10:44 PM

Email ThisBlogThis!Share to TwitterShare to FacebookShare to Pinterest
Labels: Bees

How great -- you got some free bees, too!

AMAZING!
My BIL in Ky. has lost most if not all of his bees for 3 years in a row. He said something about a "hive beetle". Or at least thats what I think he called it.
I could watch bees all day.

Boy, that farm hand did such a GREAT job on those behives! :)