Courageous Movie Family Pack - Save 30% This Week Only! 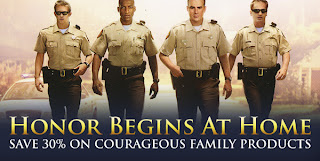 A Message from Doug Phillips:
This weekend, the new Kendrick brothers’ film Courageous made history by establishing new records for a theatrically released independent Christian film. Courageous brought in just under nine million dollars, and it had the #1 per screen ticket sale and attendance average in the country. These numbers are shockers to Hollywood, as is the fact that Courageous received an extremely rare A+ rating from CinemaScore polls, and was #1 this weekend with Fandango.
But there is a good reason why audiences are flocking to the theater to see Courageous — it is clearly one of the most inspiring, best produced, and timely independent Christian films in history. The message of Courageous is simple: Fatherhood is a precious gift and a life-defining duty. Men must step up and take responsibility as fathers.
I have now seen the film twice, and the second time was even better for me than the first. Both times there was an overwhelming sense of experiencing something holy, special, powerful, and precious in the eyes of God. Once again, Stephen and Alex Kendrick have modeled for families and filmmakers that the message and the means of creating a film can be done outside of Hollywood with great integrity, using the resources of the people of God without sacrificing the quality of the project.
The purpose of this letter is two-fold: First, if you have not yet done so, I would urge you to please see Courageous. Take your friends. Take your local church. Just see the film. Second, I want to encourage you to take a good look at the “Courageous” Movie Family Pack — five outstanding resources available at a great discount this week to equip you to build manly relationships and biblical fatherhood in your family. 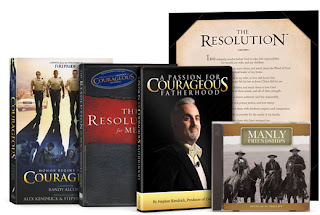 The “Courageous” Movie Family Pack — Save 30% This Week Only!
In The “Courageous” Movie Family Pack, read the novel Courageous by outstanding Christian author Randy Alcorn and discover an even deeper, more developed telling of the Courageous story. Then learn how to take the principles found in Courageous and build manly, biblical disciplines and resolve by reading Stephen and Alex Kendrick’s new book, The Resolution for Men.
As you seek to implement these critical qualities and practices in your home, The Resolution frame-ready print will be a daily reminder on your wall of what you have promised, and why, an idea inspired by great men like Jonathan Edwards and George Washington who documented their own manly resolutions. You will also enjoy watching A Passion for Courageous Fatherhood, an exclusive, 1-hour DVD featuring Courageous producer Stephen Kendrick as he shares the amazing, God-blessed story of the making of Courageous. And finally, listen to a 2-CD message by Doug Phillips called Manly Friendships — a message Stephen Kendrick said “inspired and challenged” him — as you learn what truly manly friendships look like, why they are so rare, and what men must be willing to do to achieve them.
The Courageous Movie Family Pack — Save 30% This Week Only!
Offer Ends October 8th

For five days only, purchase The “Courageous” Movie Family Pack for just $46 — that’s 30% off the $67 retail price. This special pricing is good only while supplies last, may not be applied to past orders, and ends at midnight (CDT) on October 8th, 2011.
Posted by Marci at 1:34 PM