I make a "Super Tonic" that we use all year.  It tastes good and is very versatile.  You can take it by the spoonful, although it is a bit strong.  If you think you are getting sick, you can take some or put it in tea.  I use it to cook with all the time.  I have heard some people take some every day all year just to keep junk away.  I just make a large batch of it this weekend.  I thought I would share it with you.
There are 5 ingredients in a base of raw apple cider vinegar.  It is very easy to make as well.  The five ingredients are onions, garlic, ginger root, horseradish root and cayenne peppers.  You take equal parts of each of the 5 items.  This year, I had friends give me some yellow cayenne.  I had some red that I grew and had dried, so I used both. 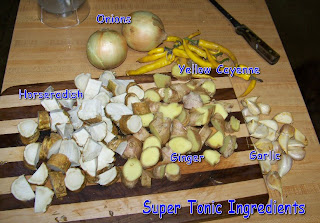 I chop up the horseradish and ginger into chunks.  You can leave the garlic cloves whole and even leave the skins on, because they will be strained off.  I put the cayenne in whole and chop the onion into bigger chunks.  Because I was making such a large batch, I had to do it in parts.  I would take an equal part of the 5 ingredients and put them in my blender.  Then add apple cider vinegar to barely cover them.  Blend until pretty fine. 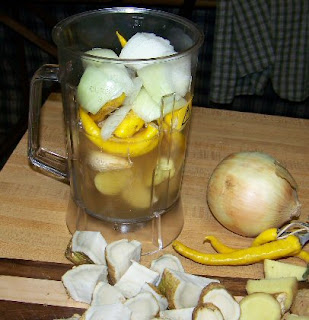 Then I put the puree into jars (I did 1.5 gallons worth).  You let the jars sit for at least 2 weeks.  You don't want them exposed to the light.  I put mine in a dark corner of my pantry and I put a dark towel over them. 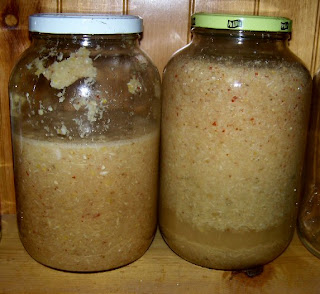 Then you strain off the liquid and keep it in a jar.  I put some in a smaller jar that I keep in my kitchen.  I use it all the time.  This stuff is great in beans, when you are browning hamburger, salad dressings and other things.  You can take the strained roots and puree and put it into your compost.
I know several families that use this and they all swear by it.
Posted by Marci at 5:31 PM

I am making a batch of this up and was wondering how much to add when I am cooking?
I love your blog and have been a reader for years although I don't comment much I do want you to know that.