I sit down to write a blog post and I have so many thoughts running around in my head, I am not sure where to start or even which thought train to follow. :)

First of all farm thoughts... Yesterday was our first chicken processing day of this year. We were up and out in the field at a little after 5AM catching chickens. By 3:30PM, they were all picked up and we were done with that part of the day. I love the days when our customers come to the farm. Often times we get to put a face to a name for the first time. We get to chat and get to know each other a little better. We have a system down. Michael and I bag the chickens together for the most part. Then I greet the customers in the store area and he brings the chickens out. I weigh and ring them up. Our online store inventory is set up in a way that they can look around and see some of the items we carry. Some customers put their order in online and then instead of shipping, they pick it up when they come out to get their chickens or eggs, etc. We never set out to be rich by raising animals. Our hopes were then, and still are now to get our meat for free. We want to sell enough for that to happen. We raised our chicken prices this year due to an increase in grain prices and also we switched to a better feed that was non-GMO and it cost more.

We had something getting into our brooder with this first batch. We found several chicks that had been attacked by something. We found a loose area and tightened everything up, which stopped the attacks. We had no idea how many chicks were just totally gone until we put them out in the field. We lost quite a few. Our chickens usually average about 5 lbs. We sat down and did the math for this first batch. We added up all the costs involved in the chickens and then figured our income using an average of 5 lbs. per bird. None of these birds were for us. We had to include the ones we were to get in the death count so that we did not short anyone. We barely covered our costs, which means no free chickens for us even if there had been enough. The feed price went up twice since we quoted the new price to our customers. I had to let them know that if they went up again, we would have to raise the prices for the next 2 batches. I will say though that we have the BEST customers/friends. One of our customers actually wrote a check for more than they owed. I did not see the amount until later, so I was unable to thank them face to face. They had offered to do that when they were here and we told them we were OK with this batch. They did it anyway. Thank you!!! You know who you are!!

I also read a blog post by a friend. She and her family are gardening not only for themselves but also for a friend who runs a CSA. The weather this year has not cooperated so far. They planted a large amount of peas and so far have only gotten enough for one meal. She has lots of good points in the post and I encourage you to read it. Hard times, food wise, are coming. They may only be temporary, but are you prepared for them? Do you have a garden or a local CSA? For those of you who do not know what a CSA is, I will explain. It is Community Supported Agriculture. You pay a fee to share in someone's crops. They do the work and you get a share of the produce. Some will let you come and work for a discount on your fee. Each week you go and pick up your share. If they have a bumper crop, you get more. If they have losses, you share in those with them as well. You can find CSA's and farmers in your area by word of mouth or checking sites like Local Harvest or Eat Wild.

The grass is really tall with all the rain we have had. We only have the 2 cows right now, so they are not keeping up with it. Our tractor is down (water pump and alternator) and so there is no bush hogging going on either. Speaking of cows, many of you know that I have been saving for a little Jersey Heifer calf. A friend of mine in another state raises Jerseys and she is holding one of the little heifers for me. So far she has stayed that honey color. I will name her Honey. The name and slogan of our farm is Amazing Graze Farm - the Land of Milk & Honey! So, when someone asks Michael where I am he can say, "She is out milkin' Honey!!" :) Yes, I am weird that way. We are praying and praying that Buttercup took. If she is pregnant, she is due in August. We hoped Clover was, but there have been signs she might not be. :( I miss Buttercup's milk. I miss making cheese and butter. Her cream is so thick it mounds up on the spoon. I had to take a picture one time because someone did not believe me. :) 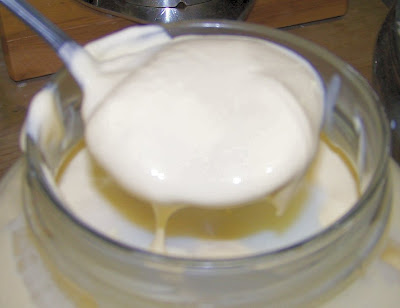 It is so sweet... it tastes like ice cream. Buttercup has to be 16 years old at least. She was due with a calf (she had it less than a month later) when we bought her and she had at least one calf before that. She has been the best and sweetest cow ever. I do not look forward to the day when she is no longer with us.

The sheep seem to be doing well. We checked the little guys to see if they were ready to band or not. They were not. We will check again in a week or so. We are going to have to have a second area to raise the little ewes in. When we get a ram in the Fall, we don't want him to breed the little ewes. They will be sold for meat along with the little boys. In fact, we already have an order for one of them.

We are taking part in a CSA this year. We were thinking we would only plant a few things here. Well, old gardeners die hard. Our garden is much bigger than we planned. It is not even all in yet. :) I love to watch a garden grow and come to life. It is proof positive to me of a very loving Creator. Some might give Mother Nature the credit, but there is a grand design behind all life. It is GOD!!! The old saying that "Time Began in a Garden" always reminds me of a funny story. My Sister-in-law is a wonderful flower garden person. She has "that touch" that I would love to have. She and a friend were taking care of the church gardens and were furnishing a lot of stuff out of their own pockets. They went to their pastor and tried to talk him into getting more money to put into the gardens. They jokingly reminded him that time began in a garden. Without missing a beat he turned and said, "So did sin!" :)

I planted some cucumbers with seeds. They are starting to come up. I also put some radish seeds in by them as well. This is supposed to help deter cucumber beetles. 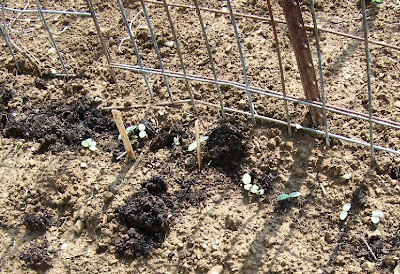 A couple of these we bought as plants and the rest were from seed. 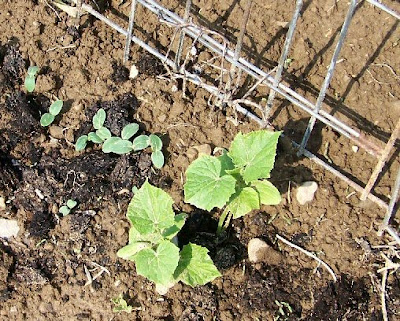 My pole beans are starting to pop up through the ground. I plant Kentucky Wonder pole beans. Many of the people around here don't like them because you have to string them. I like them for 2 reasons. First of all, I think they have more flavor and secondly, they keep producing over time. Most of the bush beans we have grown give you beans over a short time and then they are done and you need to do more plantings. 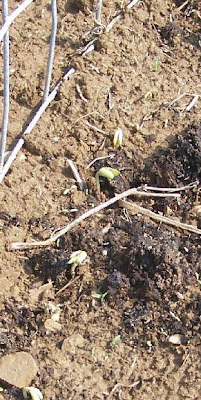 I am wanting to grow LOTS of broccoli and cauliflower. I talk about why in this blog that I was a guest poster in. I may have to grow them this Fall. They are not doing so well.

This post has gotten long, so I will close for now. How is YOUR garden growing? Do you have one? Are you part of a CSA?
Posted by Marci at 8:19 AM

Made by Hand on Planet Earth said...

What a nice post, Marci! I love hearing and seeing how everyone else is doing with their homesteading adventures. These are indeed challenging times for most of us, and stories of your wonderful customers are encouraging. Thanks for sharing!

We haven't planted yet but hope to do so Tuesday. It's late to be starting, but around here, the soil doesn't really start warming much until now anyway. It was pretty chilly this evening...cloudy and breezy. I would like to grow lots of flowers but in this drought, I don't think I could afford to water very many of them. My rose bushes are doing well, can't wait to see blooms!