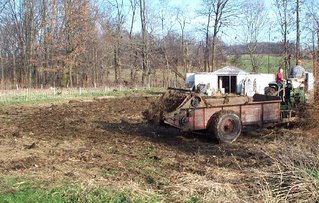 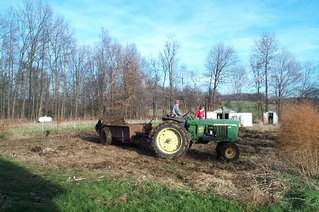 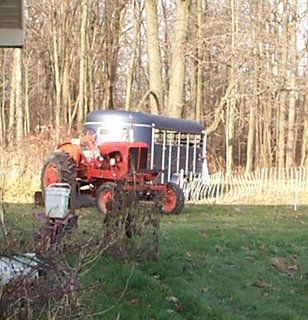 Michael, my husband was off all of last week. It is always so good to have him home. We were really enjoying one another's company. He had a long list of things he wanted to get done around here. He did not get near done what he wanted to. There were lots of things going on. Tuesday was turkey day. That was the day the turkeys we raised were butchered and people came to pick them up. Thursday was Thanksgiving and we spent most of the day with family. We had errands to run and things to do on some of the other days. Saturday morning, he got up and started mucking out the goat barn. It was going to be a huge job, since we do the deep bedding method. He had done the sheep side of the barn a couple of weeks ago. It always amazes me how much muck he gets out of so small of a space. There were huge piles sitting at the edge of the garden from just the sheep side. Besides mucking out the barn, he also needed to cut some more firewood. I was talking to one of the ladies we fellowship with. She asked me what we were doing that day and I told her. She shared with her husband what was going on here. They decided to see if either of their older sons wanted to come and help. The one son volunteered to come over and help my husband. He just showed up with a pitch fork in hand and headed toward the barn. Pretty soon, here came the Father with a couple more sons. They ended up spending the whole day over here working hard. They pulled out our tomato stakes and stored them for the winter. They graded the entrance to the goat barn which was always soggy. The barn had to be mucked out by pitchfork and wheelbarrow. It is too small for a tractor or skid steer to be able to get into. They ended up going and getting a couple of tractors from a local farmer and a friend's manure spreader. They took all the manure and straw from the goat barn and also the piles from the sheep barn and spread it over our garden. At one point there were 4 tractors here (one was ours). One had a front bucket on it. They used it to load the manure into the spreader. Another larger tractor was used to pull the manure spreader. They used our tractor to pull trees out of the woods to cut up. There were tractors going every which way. After pulling the trees out, the men helped to cut and split fire wood. Our neighbors also came and helped with the wood cutting. We had the one family over for dinner and then we watched a video together. In our fellowship time yesterday, my husband thanked the Lord for the abundant blessings. He said that they helped him to get done what would have taken him 6 weeks to have accomplished. We are very thankful for good friends.

The first 2 pictures are of the guys spreading manure on the garden. The other picture is of their tractor that was also used.
Posted by Marci at 11:02 AM

What a blessing to get all this done! Reminds me of how thrilled we were to have our friends show up to help shell in our house.

I am sure that was a huge blessing! I can guess that Mike was very happy to have the help. Can't even imagine how long it would take him on his own. Now the garden will be ready for spring!

Wow! I love your blog look. Did you do that yourself??

I'm glad you got all that accomplished and aren't friends a blessing?

Kristi, I did change the look on my blog. The graphics are not mine though. There is a link to the graphics site I got them from.

What a heart-lifting post! Thank you for sharing how friends and neighbors can make a real difference in another's life.

I keep you in my prayers.

Another day the L-rd has made.
Blessings all
GP in MOntana