How Does Your Garden Grow?

My camera is really doing some weird things. I took some pictures yesterday of our friends enjoying the sunshine with us. Then later when I went out to take pictures of some dogwood blossoms and other things. When I came in, the only pictures that downloaded were the ones of our friends, all except the last 2 pictures I had taken of the other Moms who were there. When I went to download pictures today, 2 pictures I took after everyone left yesterday showed up. They were the only 2 that came out from my second round of taking pictures yesterday. The weird part is this... The 2 pictures I took later on, are on the camera FOLLOWED by the 2 pictures of the other Mom's I took earlier. So, those pictures finally showed up, but their number sequence is AFTER the pictures I took later in the day. This is weird. I love taking pictures and I hate to see my camera not working. Anyway, here are some pictures I got off of it.

The lilacs are from our yard. The sunflowers and the orange flowers were brought to me by my wonderful husband on Friday. They were for Mother's Day!! 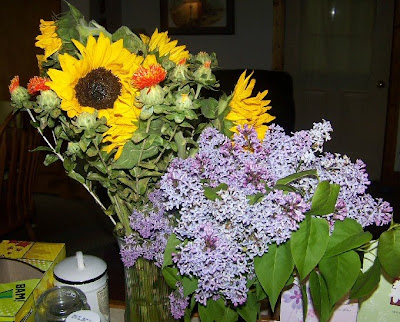 Here is a close up of the orange flowers. They almost looked like a thistle. 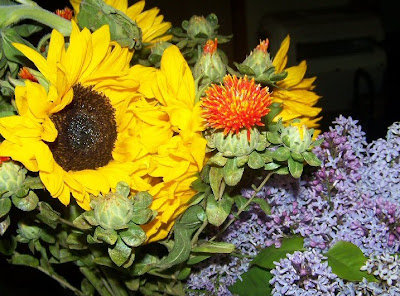 This is the basket on my old bike I have parked in my flower bed. :) 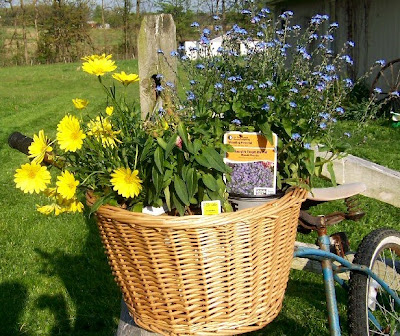 I read a great idea (I forgot where) that I wanted to try. You plant your seeds in a half of an egg shell. Then when it is time to put them in the garden, you just put the whole egg shell down in the dirt. The article said that you won't get the trauma to the plant that is often caused by replanting. I have some already coming up. If you remember in this post I said that I was planting a lot of broccoli and cauliflower because we are eating a lot. The ones coming up are broccoli and cauliflower. :) 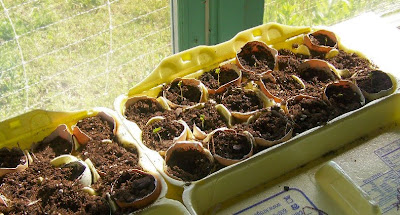 We are so grateful for this week and for the sunshine we have enjoyed. Michael took time today to get the garden tilled. We need to put up a fence before we plant though as the chickens are trying to claim the garden as their own. 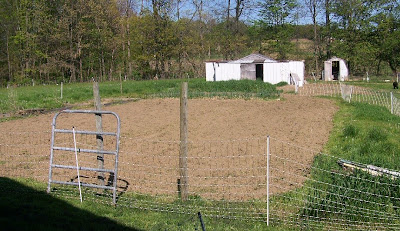 What is happening in your neck of the woods with gardening? Are you harvesting anything yet?
Posted by Marci at 4:56 PM

Email ThisBlogThis!Share to TwitterShare to FacebookShare to Pinterest
Labels: Garden

Still a little cool and wet to plant my normal vegetable garden. In a few days I would think. Did plant a few early onions and lettuce in my herb garden though and those are starting to come up. I love walking through the gardens each day to see what's poking up!