I want to talk about food. Before I get into the topic though I want to state that I do not claim to be an expert. I am simply sharing information I have gleaned over the years and my own experiences. I am not a health food queen and I do not play one on television. =) I also want to state that this is our story and in no way do we want people to think it is the only way to do it. This is the way that God led us. I am saying this because I have been very saddened recently by some discussion by people who are full of pride telling about their outward holiness. They have hurt some people and turned them off and pushed them away. Go to the Lord and ladies go to your husbands to decide if you need to change anything and if so what you need to change.
I used to get sick all the time. Whenever a flu or sickness went around, I was down with it. We knew that something had to be done. I started getting this very severe and weird pain. I have never been a major fan of doctors, but I went because I would be doubled over and had not found anything that would help. I will skip the details since this is a public forum. =) I was not listened to even after explaining the exact location of the pain several times and correcting them, when they kept naming the wrong area for pain. They said I would be scheduled for an ultrasound, and if that did not give answers, then I would be given a laparoscopy and if they did not work I would be taken in for exploratory surgery. I looked at them and just smiled. I walked out and never went back. I was not a guinea pig and they were not even listening to me. I was at a meeting one night when the pain hit me. There were some ladies there that came over and asked if they could help. We explained I was having this severe pain and that it would pass after a while. They gave me an herbal tincture to try. I was willing to try anything at that point. They explained what was in it and why it may help. I got relief. I was amazed.

We started praying and asking the Lord to help us see where we could make changes. I was introduced to true whole wheat bread. Way back in the old days people got their flour milled daily. I love to look to the Bible for wisdom in this area. It talks about our daily bread. I think there is a reason for that. Once you crack a kernel of grain open the nutrients in it start to oxidize. Within about 72 hours most of them are gone. You can slow it down a little bit by freezing it, but overall it starts to die. We bought a grain mill and started grinding our own grains. We do not do this daily, although that would be ideal. That was the first big change we made, but we saw a difference right away. My health improved and I just felt better. We started to sell the grain mills and mixers and in the end we ran a huge co-op. People were wanting to take charge of their food. I used to have a neat little set of vials that showed the different aspects of the wheat kernel. It was lost in our move, but I recently purchased another one. Here is a picture of it. On the far left are whole wheat kernels or they are sometimes called berries. Going in order from there to the right are bran, middlings, wheat germ, wheat germ oil and then white flour. 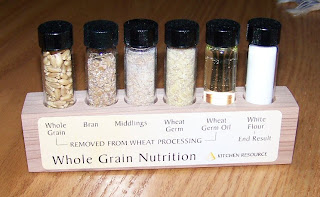 When people used to have their flour ground daily they got all of the above ingredients. A kernel of wheat is chock full of nutrients that our bodies need. Here is what the Montana Government (Montana is a big wheat growing state) says about wheat.

It’s little wonder then, that wheat has long been considered the staff of life.

Then large roller type mills were invented. They would take that same bushel of wheat and mill it. However, they would sell the bran, middlings and some of the wheat germ as animal feed. Some of the wheat germ and its oil were sold to the health food industry and then the left over dead white flour was given to the people. It was such a change at first that people started getting diseases from it. I know that beriberi was one of them. So to counter that after taking out 28 or so nutrients, they added back in about 4 (enough to get the beriberi to disappear) and call it enriched. The animals were eating more healthy than the people.

I realize that not everyone can buy a mill. God knows that and our health is ultimately up to Him. Maybe you could find someone and share theirs. I have done this for several people. You get so used to what I call "real" bread that when you don't have it you hunger for it. When we moved up here from Florida, all of our stuff was in storage from September until December. I would get so hungry for my bread. There was a place in a nearby town that sold all sorts of bread and they ground their own wheat for some of it. We would go and buy about 3 loaves (they were expensive) and by the time we got home, one would almost be gone. 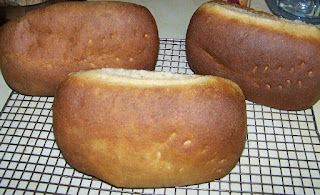 We are not purist by any means. When I got so sick with meningitis 2 1/2 years ago, we went a long time with store bought breads. It is just recently where I have truly tried to go back to not buying any store bought bread.

Wheat is also a lot easier to store. They actually found some wheat in a Pharoah's tomb. It was called Kamut. Here is what they say about it...

"When Dave Sandoval (owner) learned about this ancient, Egyptian Kamut wheat, he was fascinated. He met a gentleman who had originated Kamut wheat and propagated it and did the scientific research and proved that it
was literally an heirloom seed and that it was over some 2000 years since it was used in any type of known civilization. It was stored in a tomb in an Egyptian burial site in … "The Valley of the King" and during an excavation, some of those wheat seeds were stolen. They found their way back to Montana in 1949 to be exact. Different types of wheat, won every prize, every ribbon for different strands of wheat. This scientist learned of it as a young boy and later decided to study it and found that this ancient wheat really had come from a tomb in Egypt, and that it really did have unique qualities, and it really was the father of all modern wheat grains. In this major achievement for agriculture, it was re-introduced into the food system after 2000 years."

I hope to be adding more posts about eating choices and our journey in that area. I also might start sharing snippets of our journey from city slickers to farm life. As my Mom would say, we were real messes. =)
I would love to try and answer any questions you have or hear anything you would like to add.
Posted by Marci at 8:28 PM

This was an exciting post for me to read as I am anxiously awaiting the arrival of my very own grain mill! I can't wait to get it, and grind my own wheat!
I have been making my own bread for some time now, but w/store bought flour.
This will be a new experience for me. Thanks for all the info! :0)

Hi, I hopped over from Patricia's. We started milling our own flour in December and we have already noticed a HUGE difference not only in taste/quality, but in how we feel. I have also been gradually losing weight, just by eating healthier and no dieting. We have been on a journey, gradually over the last several years, starting with letting go of certain things and now we are to the point where we are hoping and praying God will help us get to a place where we can have a yard and grow more of our own food. We have also found that the home milled flours work so much better than store bought WW flours and the taste difference is phenomenal. We make bread but also have been making some of our family recipes over like some yummy choc chip cookies made with ww and using more natural sugars and honey and trying fun things like bagels and tortillas. I have been using the white hard wheat from Montana for a lot of stuff and it is so good, also red hard wheat, soft white wheat and spelt. Next to try is kamut which you wrote about. I have heard it is good for pasta and behaves more like Durum/Semolina. I have bookmarked you to come back and read more of your journey. It's fun.

Marci,
We too grind our own wheat. I am a believer in real whole wheat bread. I found this post very interesting. Thanks for taking the time to share it with us.
grace and peace,
julie

I love my mill! But I have to admit...with all the moving we have done in the past few years I haven't used it as much as I need to. Just got out of the habit, but the fresh whole wheat makes such a huge difference!

Okay I really want to make my own bread and grind my own wheat....however so far I have been a failure at making yeast bread. I do not want to buy a lot of grain until I have mastered the art of bread making. Both Shane and I have been trying to eat healthier and this would be a good addition.
We always think of you when we are in the Columbus area.

How interesting! My husband have been trying to go totally to homemade bread-but it is hard to give up the ease of store bought.

I would love to hear more about the grain mills. We make all our own bread, but would like to make it healthier.

Someday we hope to move from our high-rise condo outside of Washington, DC to my husband's family's farm (farm-ette, really) in NW New Jersey. Your story is inspiring!