Blessings have been abounding around here as of late.  God is so good to us.
Michael hurt his left arm when he was exercising about a week and a half ago.  It has really bothered him and limited what he has been able to do.  We heat with wood and he has been having to make sure their was wood split or at least in the right size to go in to the stove.  He has done a wonderful job, but it has been painful.  He has not complained once.  He was able to go and see his brother yesterday.  His brother is a massage therapist.  He worked on the arm for an hour and told Michael to take it easy and let the arm rest for a few days.  He also said that his arm would be really sore today.  A couple of the men at church along with some of the younger "men" were going to be cutting wood today and they asked Michael to join them.  He thanked them for the invitation but told him that with his arm, he would have to wait until the next time they went.  Those wonderful men brought us two huge loads of wood.  They stayed and split it and even stacked it for us.  Michael helped them in the stacking and did what he could, but we were TOTALLY blessed by these guys.  It is hard to be on the receiving end and it is very humbling.  I thank God for these men and ask God to bless them mightily!!!
Then today, my niece had her baby.  She had a little boy who still has no name.  He is absolutely precious and I can't wait until I can snuggle him.  :) 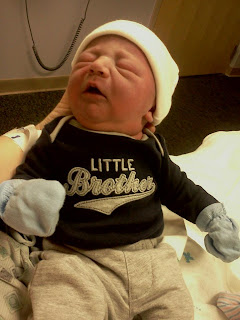 This is him getting ready to meet his big sister!!
Posted by Marci at 10:08 PM

God is good all the time!! I am so glad that these men helped you out when you needed it. Friends are so wonderful to have. Enjoy all that wood stacked up!!

Yes, it can be humbling to be on the receiving end of help. But what a blessing to have help with the wood. I hope your husband's arm is back to normal quickly.
Thank for your visit on my blog too. Yes, my dear husband had cancer. Diagnosed and gone in 10months. He put up a good fight, but our Lord had different plans. Yes, I have family and friends that are close by and that is a great help.
What a blessing...a new baby in the family. Enjoy the snuggles!
Brenda