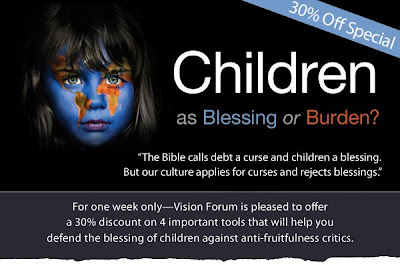 Summary: As the world faces a potential demographic winter of underpopulation, political leaders move to clamp down on babies, and liberal social commentators use the language of hatred and fear-mongering to further anti-family campaigns aimed at proponents of fruitful families, many Christians remain undecided as to whether or not babies are a blessing or burden in troubled times. This post from Vision Forum explains the controversy. It also points you to resources that will help you to better communicate to neighbors, relatives, and friends the practicality and blessing of children in tough economic times.

After more than fifteen hundred years, Japanese culture is on the verge of extinction. There are not enough children. And similar fates may be in store for France, Italy, and elsewhere. These nations and others are on the brink of a demographic implosion with far-reaching economic implications — and they know it! There are simply not enough babies being born to maintain their economies.

But they are not alone. In the United States, the birthrate has been experiencing a dramatic and steady twelve-year decline. Despite this fact, last week, Speaker of the House Nancy Pelosi defended her proposal that an important ingredient of the nation’s $825 billion “economic stimulus package” would include a taxpayer-subsidized effort to prevent the birth of more children. Why? She argues that children are bad for the economy.

Are babies a blessing or a burden? This is a simple question, but one fraught with tremendous controversy and significant implications for nations and families.

There are really three issues on the table: First, the demographic implications of having babies; second, the practical issues concerning babies and the family during a recessionary economy (or at any time); and third — and most importantly — the scriptural foundations for a Christian worldview of the womb.

What May Happen to America and Other Nations Because of the Dramatic Decrease in Childbirth?

This first issue goes right to the heart of the present culture war: Will we be a self-indulgent nation with little regard for the sanctity of life, or will we recognize the God-ordained blessing of the biblical institution of the family with its emphasis on fruitfulness and the blessing of children?

As a nation, we have chosen the former. Now the question is this: What are the practical implications of our selfishness and disobedience? What happens to a country when the Malthusian dream is realized, and women have fewer and fewer babies?

The ultimate result is a culture-eradicating phenomenon and economic catastrophe called “Demographic Winter” — where the selfishness of a generation of families who refused God’s gift of children leads to a national birthrate that is insufficient to replace its aging population. Don Feder put it this way:

Demographic Winter is the terminal stage in the suicide of the West — the culmination of a century of evil ideas and poisonous policies.
Here is how one demographer described the imminent catastrophe that will result from declining birthrates:

The ongoing global decline in human birthrates is the single most powerful force affecting the fate of nations and the future of society in the twenty-first century. —Phillip Longman, The Empty Cradle: How Falling Birthrates Threaten World Prosperity.

This perspective may be a shocker for those raised during the libertine ‘60s and ‘70s with the message of the Pill and population control, or for those spoon-fed on a diet of Green theology in the ‘90s. It is not comfortable to radical feminists who have made the “right” of a mother to destroy her own child the highest virtue a society can embrace.

But the facts are inescapable. 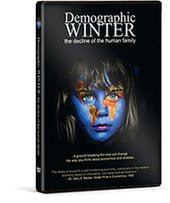 And this is the subject of the documentary, Demographic Winter: The Decline of the Human Family, one of the most important and groundbreaking films of the last year, maybe of the last decade. This is the first significant film to explore the most overlooked crisis of our generation: the rapid worldwide decline in birthrates.

The data presented is chilling. Columnist Don Feder summarizes the important issues raised by the film (i.e., how “demographic winter” will impact many areas of our lives):
What will happen in the First World as fewer and fewer workers are called on to provide pensions for more and more retirees? At what point will the burden become so onerous that young workers will simply rebel and refuse to support a system that they couldn’t possibly hope to benefit from?
How will Russia, which is expected to lose a third of its population by mid-point of this century, defend its borders? If Russia, which occupies the largest territory of any nation, dissolves into enclaves of squabbling ethnic groups, it will destabilize both Europe and Asia.

Due to falling birthrates, at some point in the century, the world’s population will begin to decline. Then the decline will become rapid. We could even reach population free-fall.

Throughout the course of history, there is no instance of economic growth accompanied by population decline. How can an industrial society be maintained with fewer and fewer workers and consumers?

This film does not pretend to be a Christian film with a biblical analysis, but it is so full of carefully-researched data that is indispensable to this critical culture battle that Christian parents around the nation need to own it, and watch it, and then watch it again.

What Does Managing a Large Household Look Like in the Real World? Can I Really Afford Children?

The second major issue pertains to practicality: Assuming that children really are a blessing and the fruitful womb “is His reward” (Psalm 127:3), how does that concept work in the real world where economic resources are scarce and time is at a premium? 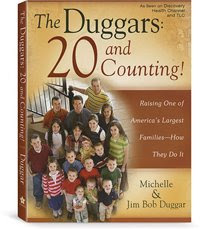 Sometimes people pose the question this way: “I can barely manage and afford a family with one child. How could I possibly handle three or four, let alone (gasp!) seven?”

But there is another question that needs to be asked: Are there practical, economic, and spiritual blessings for the family that flow from an economy of scale?

I believe there are. And these are precisely the types of blessings and benefits that Jim Bob and Michelle Duggar have modeled for all of us in their beautiful new book, The Duggars: 20 and Counting: Raising One of America’s Largest Families — How they do it.

From a practical perspective, this book offers definitive answers. And it is absolutely delightful, transparent, hands on, and full of humor. After reading it, you will walk away loving your own family more and will gain great ideas for household management. My wife gobbled it up:
This is a totally delightful book, easy to follow, and full of personal stories about their life as well as practical, tangible information about THEIR family which can be easily adapted into MY family, or anyone else’s. It is honest, humorous, humble, and completely in earnest. . . . You will read about their life story, from Michelle and Jim Bob’s childhood up to right now, their many businesses, their solution to laundry, education, music, and even food preparation.

There is a reason why this family has captured the imagination of America through their top-ranked television show, 17 Kids and Counting. They are communicating a Christ-exalting vision of home. And they are the real deal! A family that loves their children — all eighteen of them. There is so much negativism in the world, but the Duggars are using their life as a large family to show the beauty and practicality of the Christian household to a generation where many children never even experience the blessing of sitting down with their whole family for dinner.
What Does the Bible Say about the Blessing of Fruitfulness?
Does this Apply Today?

The final issue is the most important one: What does the Bible say about having babies? 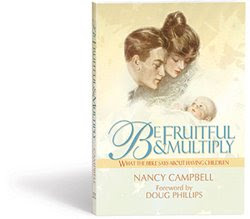 For Christians, the Bible is our standard for faith and practice. Everything necessary on the subject of having babies is found in God’s Holy Word. It is both the starting place and the “final court of appeal” for prayerful Christians who desire to make wise decisions regarding the womb.

Related issues include: Why are children a blessing? What does it mean to be fruitful? How does the Bible specifically link low birthrates to national judgment? Does the Bible promote, condone, or encourage baby banning? Is it a good idea to have babies in times of economic hardship?

These questions and others are answered in our CD, Children and the Dominion Mandate, and the book Be Fruitful and Multiply, both of which are included in this week’s special offer. If you have ever found yourself wondering how to respond to such questions, or if you have friends or relatives that disapprove of the number of children in your family, these indispensable tools will help you to use Scripture to reason through the many complex issues which are on the table.
Save 30% on Our New Collection: The Blessing of Children

Hi Marci,
We love watching the Duggars! They are such a nice family!

~Have a great Thursday!