I will admit that I have done most of my snow gazing from indoors. I love to watch it snow, I love to look at the snow, but I don't love to be out in it. :) Today, that had to change. Our county was under a level 2 snow emergency. You would not get in trouble for being on the road, but they did not advise it. I had five packages to mail. When someone places an order from my store and pays for priority mail, then I feel like I need to get it to the post office quickly. Michael said that we could get out of the driveway, so we tried. He went out to clean off the car. It was piled high with snow. He took the broom and went to clean it off. I got ready and went out, but had to wait because cleaning the car off was going to be a real chore.

While I was waiting by the door I looked down. These bird tracks went from under the feeder to over on our front porch.

Here is what is left of one of my snowmen after a day in the 40's, wind, snow and ice. :) He looks like a snow alien. 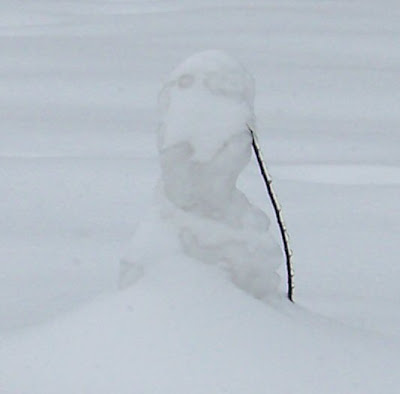 Here is the car. It was coated in a thick layer of ice, with snow under and over it. 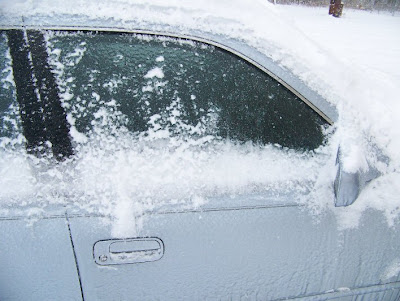 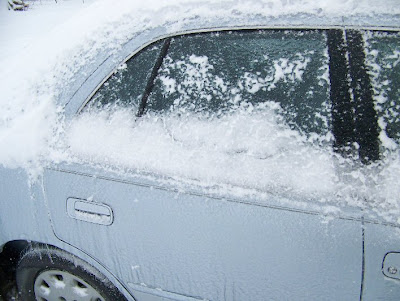 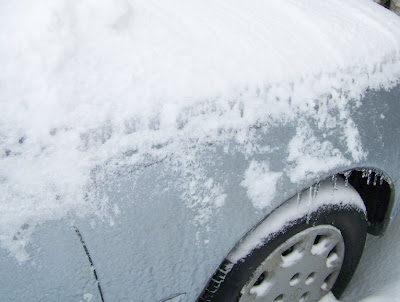 You can see in this picture how thick the ice was on the windows. He had to chip it all off just to open a door. 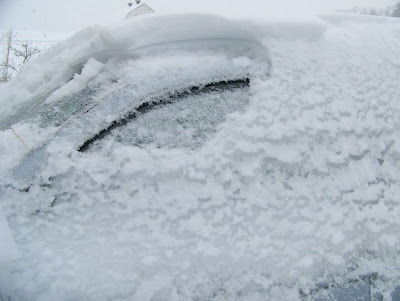 He finally got it cleaned off and we got the packages and hopped in the car. We headed down the driveway. I wanted to take a picture, but we couldn't stop. We got down and rounded the curve and a small tree on one side of the driveway had fallen over blocking half of the driveway. The ice load on it had caused it to fall. We couldn't stop though or we would be stuck. So, we rounded the curve and headed up the hill toward the road. We slowed down near the tree to go around and that was a mistake. We could go no further. He was able to back down the drive and had to stop at the curve. So, I snapped this picture. I didn't want to let the opportunity go by. We ended up backing all the way to the house. 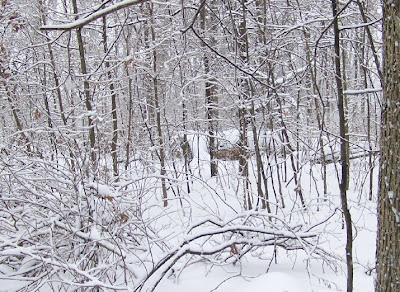 He went to get the chain saw to cut the little tree down and put it on the side of the driveway. I decided to take a few pictures before going in. This is my other larger snowman. He had bowed down face first on the warm day. Now, he is a large snow blob. 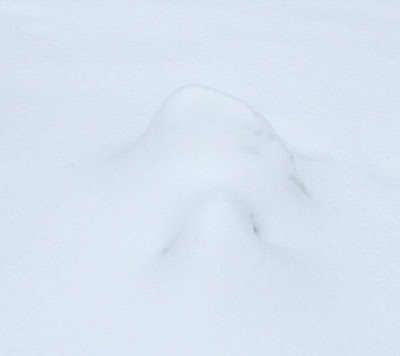 Here is the alien snowman and our snowy play area. 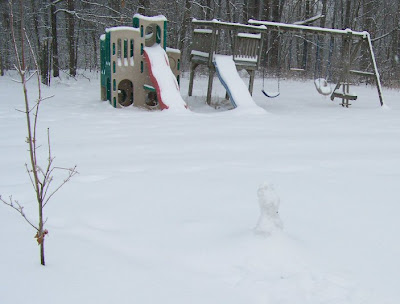 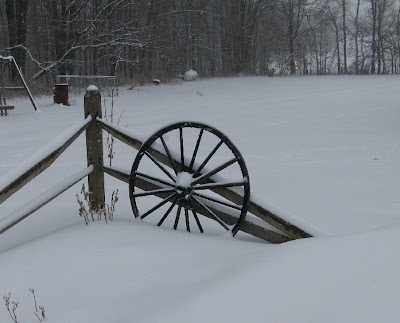 In this picture you can see the snow on top of the picnic table and the bird feeders. You can also see icicles hanging from them both as well. 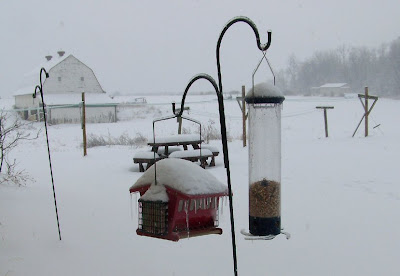 I went on in and did not realize that Michael decided to try the car again. Pretty soon here he came walking in. The car was stuck at the curve. He had to plug the tractor in and let the motor warm up so we could start it. Then once he got it started, we walked down the driveway to the car. I was trying to stay in the deeper snow because where he had stepped or where the car had gone, it was down to the slippery ice. I got in and steered the car while he pulled it up to the house. We got back in and headed for the post office. We made it out the driveway this time and our road was plowed, but still pretty icy. Then when we got to the state road, it was plowed, but still really bad. Thank goodness the post office is very close. The lady that works there said there had not been too many people in today. We got back home without a problem. The trees were all gorgeous and I had left my camera at the house. :( I was not going to chance going back out to take pictures.
Posted by Marci at 12:11 AM

Hi Marci,
Didn't know if you knew this but if you are mailing Priority, you can call for a pick up :) No extra charge :)
Ya'll stay safe and warm. I am envious of your snow.
Blessings,
Cheri

So glad you made it out of the driveway and to the post office safely. Hopefully the roads are better today.